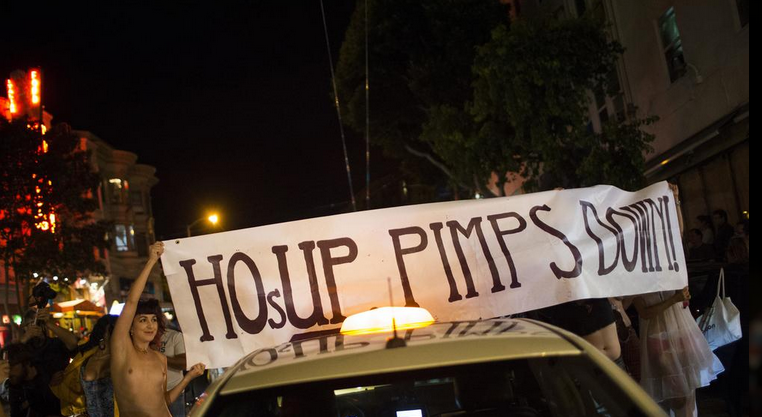 A group of exotic dancers carry a banner above a taxi during a funeral procession to symbolize the closure of Lusty Lady strip club in San Francisco.

San Francisco’s Lusty Lady, which first opened in 1976 became known as the “World’s Only Unionized Worker Owned Peep Show Co-Op.”[1] Working at the Lusty, “I felt like I had died and gone to hooker heaven,” explained one former dancer.[2] Between its initial unionization drive in 1996 and its closure in 2013, the club’s dancers worked to “make the Lusty Lady Theater the most triumphant peep show on Earth,” and successfully established a groundbreaking model of cooperative ownership and institutional protections within the notoriously unregulated sex industry.[3]

When the Lusty Lady began to offer live peep shows in 1976, it joined the booming post-war sex district in the North Beach neighborhood of San Francisco. San Francisco had a strong tradition of sex work establishments, from the early prostitution economy in the 1850s Barbary Coast district, to the sexual revolution of the 1960s and 1970s that ushered in topless nightclubs, massage parlors, pornographic bookstores and movie theaters, peep shows, and strip clubs.[4]

Out of the civil rights movement of the sixties came the prostitutes’ rights organizations Call Off Your Old Tired Ethics (COYOTE), the Exotic Dancer’s Alliance (EDA), and the U.S. PROstitute’s Collective, groups that challenged the stigma of sex work and demanded rights and recognition for sex workers, often within the framework of mainstream labor protections. By the 1990s, sex worker organizing in San Francisco was growing rapidly and facing the political establishment head-on. The SF Board of Supervisors created a Task Force on Prostitution that included current sex workers, the EDA fought wage exploitation and labor violations by strip club owners, and the St. James Infirmary, the first occupation health clinic for sex workers, opened.[5]

At the same time, many lap dancing and strip clubs began to switch, as Kerwin Kaye reported, “from a strategy of over-charging customers to a policy of under-paying dancers.” Clubs eliminated minimum wages, overtime pay, and social security for dancers, and instead made them pay increasingly expensive stage fees and work exclusively for tips. The Mitchell Brothers' O’Farrell Theatre in San Francisco reclassified its dancers as independent contractors and other clubs followed suit in order to erode wages and labor protections for strippers.[6] A wealthy landlord by the name of Roger Forbes had bought many of the strip clubs in North Beach and established a monopoly over nude dancing, allowing him to maximize profits while demanding increasingly exploitative working conditions.

Pepper, a dancer at the Lusty Lady and member of EDA, explained that the Exotic Dancer’s Alliance organized collectively in the nineties to combat “rising stage fees, rampant trafficking in the clubs, and also just a general degradation of working conditions.” At the same time, the Lusty Lady dancers were experiencing similarly degraded conditions:

“There was some morally reprehensible shit that unionization was attempting to counter… there was a more lucrative private booth, and they were refusing to schedule African American women in there, because they said that they weren’t a draw, that no one wanted to see them… And there were booths that had a one-way window, you couldn’t see the patron, but you could fully see the red light of a video camera. So you didn’t know if the person in there was your landlord, your boss from another job, a distant relative…”[7]

In response to managers’ racist and exploitative policies, and triggered by the unjust firing of a dancer, Lusty Lady workers began a unionization drive in 1996. That spring, 80% of the dancers, janitors, and cashiers signed union cards and voted in favor of unionization. Workers entered months of grueling negotiations with the club’s management and became a full union shop in 1997, under the sponsorship of the Exotic Dancers Alliance and Service Employees International Union. Although the workers themselves brokered the collective-bargaining agreement, their demands were supported by ongoing sex work activism in San Francisco politics and civic life by the National Organization for Women, Margo St. James, and the constant organizing of sex workers in the city including exotic dancers, escorts, prostitutes, and massage parlor workers.[8]

Despite these advancements, the reality was that the he hierarchical union structure still did not provide workers with the agency they wanted. As one worker recalled, “There was always a lot of talk about whether the girls could buy the club.”[9] When the owners, Multivue Theater, announced that they were closing the Lusty in 2003, the dancers seized the opportunity and formed the first modern worker-owned cooperative in the American sex industry.[10] Since Lusty’s shift to a cooperative model until its closure, all workers earned equal pay and all decisions were made by consensus. 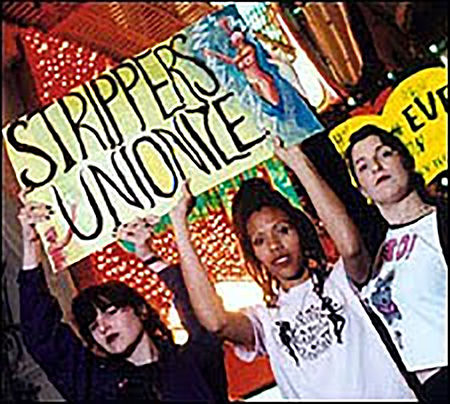 Lusty Lady employees demonstrate in front of the Lusty during the 1996 unionization drive.[11]

The Lusty Lady created a groundbreaking model of employee-driven sex work that was protected by mainstream legislation. The Lusty was an “answer to a mainstream strip-club industry that many Lusties dismiss as exploitative and paternalistic,” and created a space that was safe from many of the dangers of inequities in other clubs.[12] As Pepper explained:

“Towards the end, and to this day, there’s a fair amount of violence [in strip clubs] because the whole situation with the clubs has completely disintegrated. They’re kind of brothels, with pimps running women out of there, a lot of trafficking and a lot of drug trafficking, so there will be rivalries between crime syndicates that sometimes result in gunfire -- I’ve been out there and seen that.”[13]

Many dancers described working at the Lusty Lady as an overwhelmingly positive experience. Kathy described the Lusty as “the dream job” and a “stark contrast” from previous sex work experiences, including escorting.

“All of the things that had felt oppressive about sex work... vanished when you stepped through the doors of the Lusty. You knew how much you were getting, what you were doing, you had face-to-face contact with other women... you are clear on the expectations, you’re clear on what can get you fired, what can get you hired, what the boundaries are between you and the customers.”[14]

The model of the Lusty Lady created a new, radical framework for both workers and society at large in relationship to the sex industry. Many forms of sex work are predicated on the isolation of individual sex workers from each other and from mainstream institutions. The Lusty Lady “serves the workers, rather than the desired clientele,” giving workers greater agency and collectivity – but was interpreted by some as harmful to profits.[15]The peep-show structure of the Lusty created a level of agency and autonomy that was not present in traditional strip or lap dance clubs. In a peep show, the dancers were together in a room and separated by glass windows from the customers, who sat in individual booths.[16] The cooperative nature of exotic dancing and peep-show work promoted a unified collaboration among the workers -- and a tangible separation from the customers -- that contributed to the Lusty being the site of such a successful, long-term unionization drive. One former Lustie explained that working in a unionized, collective environment was a stark break from the solitary experience of escorting and phone sex, allowing her to connect with other sex workers and rewrite the narrative of women working together.[17]

The Lusty’s unionization was a standout success in an era of short-lived, and often unsuccessful, attempts to organize sex workers. Dancers at the Regal Show World in San Francisco also tried to unionize, with the help of infiltrators from the Lusty Lady, but were circumvented by anti-union lawyers who shut down the club and changed ownership in order to avoid the unionization.[18] The Pacers Showgirls International strip club in San Diego successfully unionized in 1993, but by 1996 the employer won a derecognition election and the union disintegrated. Exotic dancers have organized but failed to gain union recognition in Seattle, Anchorage, Philadelphia, and Las Vegas, and porn actors in the San Fernando Valley have repeatedly, and unsuccessfully, attempted to unionize as well.[19] Institutionalization of exotic dancing built upon earlier struggles to validate feminine, domestic work under the same logics that value masculine labor. The unionized Lusties demanded full and equal recognition of their labor in the public sphere, and set a standard for rights and autonomy within traditionally feminine, private (or taboo) sectors of work. Their successful campaign evidenced a concrete restructuring of women’s relationship to the formal economy and to traditionally masculine labor movements, and asserted the validity of sex as a form of labor in capitalist systems.

However, the victories of the Lusty Lady were contingent on legislative discrimination that privileged exotic dancing over other forms of sex work. Prostitution is a crime in most U.S. states, and anti-pimping and criminal conspiracy laws prohibit escorts and prostitutes from meeting to discuss coordinated action. The prosecution of sex workers for coordinating and sharing their earnings has “had a chilling effect on organizing work in San Francisco.”[20]

Roger Forbes, who is a shareholder in Deja Vu, bought the Lusty Lady building in 1998. He immediately raised the rent from $5,500 a month to $13,500, and increased the rent over the following decade. These dramatic rent increases, as one expression of the intensified gentrification of San Francisco, impacted the character of North Beach including its demographics. As Pepper explained, San Francisco “went from being a town where there were a lot of working-class men, who would go up there and drop a few dollars... to being a very, very white collar town where people wanted to pay a door fee, they wanted to have it be upscale, they wanted a steak and a boob job.”[21] The Lusty Lady also saw falling profits as a result of the growing internet porn culture, allowing patrons to access sexual entertainment for free and from the comfort of their homes. The Lusty Lady was evicted by Forbes in 2013 after failing to make its rent. To mourn its closure, Lusty Lady dancers had a theatrical funeral through the streets of San Francisco. 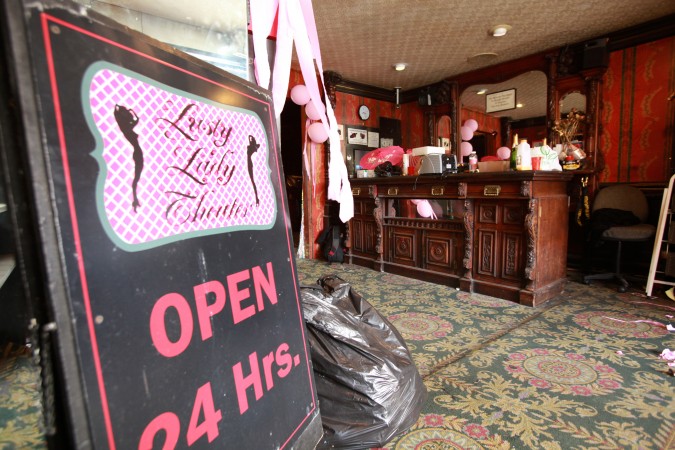 Inside of the Lusty Lady on the day after closing, September 2, 2013

Although the Lusty Lady closed in 2013, the club left behind a legacy that outlives the union itself. The Lusty was a final holdout against the monopolization of the strip industry in San Francisco, fighting to maintain its space as Roger Forbes quietly bought every major sex club in the city. Forbes and his properties are linked to Deja Vu Consulting, Inc., which is owned by Harry Mohney and operates a “multimillion-dollar empire… of nude dance parlors, peep-show operations, coin-operated vending machines, phone-sex services and ‘love boutiques’.”[23] Today, every club on “the strip” - as many dancers refer to the length of Broadway where most sex clubs are located - is owned by Deja Vu Consulting. Many dancers have expressed chagrin with the exotic dancing environment of the last decade, especially after the Lusty Lady disappeared, and took with it a stronghold of worker protections such as hourly wages and glass barriers between dancers and customers.