Looking Back a Quarter-Century in 1976 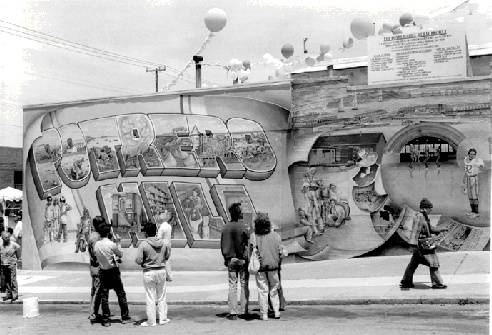 1951: The Board of Education exercised eminent domain on ten more homes for the expansion of Patrick Henry School. 634 Kansas Street became 701 Kansas Street.

1954: The brick paved streets were gradually being replaced by asphalt, but the bricks are still visible as a viable part of Potrero Hill in the form of planter boxes, stairs, and bulkheads.

1955: Quiet, peaceful Potrero Hill erupted when the residents realized they were in an urban renewal study. The hill was slated to be the first renewal area in San Francisco according to the government, but not according to Potrero. The Hill is still here, so you know who won. . . Many times through the years, renewal programs under different names have returned to nibble away at the hill but the hill has always been able to unite forces when needed.

1959: A proposal to permit tall apartment buildings along the ridges of Potrero Hill was vigorously opposed by a vocal group of over 300 home owners.

1960: October--More than 200 Potrero Hill residents stormed down to City Hall to protest against plans for more Public Housing in their neighborhood. The controversy began when the Authority announced plans for the Carolina Housing Project, in the blocks bounded by 18th, 19th, and DeHaro Streets, and the Western Pacific Railroad right-of-way. The project had been built during World War II and contained 100 apartments. The Authority wanted to tear them down and replace them with 196 apartments. Much of the protest came from the fact that of the 15,000 residents on Potrero Hill, some 4,000 already lived in public housing projects. . . This was the beginning of a proposal by some residents to use the property for a Junior High School.

1960: July--The Western Pacific tunnel gave way. Homes at Arkansas and 19th Sts. collapsed. Homes on Missouri between 20th and 22nd were damaged by cracks and settling. After much litigation, the tunnel was filled with cement and the homes made a comeback.

1961: April--Supervisors approved the $40 million route to connect the Southern Freeway at Evans to the Embarcadero at Howard Street. It would be nestled into the East slope of Potrero on Iowa Street. Residents who recalled the devastation of the James Lick Freeway [Highway 101] only 14 blocks away were trying desperately to save the 64 properties including 34 homes that would be wiped off the tax rolls. While women were inside presenting their alternate plan to the Mayor, others were outside parading with anti-freeway signs. The Mayor admitted he was impressed with the plans and all the work that was done, but he must be guided by the experts. The ranks of the Potrero freeway protest were swelled at the Supervisors meeting that same day, but to no avail. The freeway is now a reality, but not without proving many of the concerns justifiable.

1962: May--The "ubiquitous ladies" of Potrero Hill succeeded in maintaining 5th and Jessie as the terminal for the #25 bus line. . . The press always spoke well of the representation from the hill. Two ladies were even fondly dubbed "Gold Dust Twins," as they were everywhere together representing the hill.

1963: A plan to sell three blocks of the unpaved portion of 22nd Street between Missouri and Wisconsin was shelved due to the outcry of residents. . . About 50 property owners in the area bounded by 16th, Hwy 101 and Potrero Avenue protested successfully, not wanting to be a part of the Rapid Transit Corridor Study for Redevelopment.

1964: Potrero Hill rallies to ward off plans to develop a 156 foot high-rise of 92 units at Missouri and 22nd Sts. . . Potrero Point considered for the Western terminus of a Southern San Francisco Bay crossing to Alameda (i.e. a 2nd Bay Bridge). . . R3 zoning became law for Potrero Hill residents . . . The bond issue for Potrero Hill Jr. High was approved by voters.

1966: The Islais Creek Airport revised as the India Basin Airport.

1967: March--The community turned out to help the Carolina St. neighbors landscape their divide strip between Southern Heights and 23rd. . . Carolina Street between 18th and 19th was vacated for the construction of the Potrero Hill Jr. High.

April--A special tree planting ceremony around the water department property at Carolina, 22nd and Wisconsin Sts. . . Southern Freeway construction causing damage to homes on the East side of Pennsylvania, including St. Teresa School. Large cracks appear due to slippage of earth. When the hill could not stand any more chopping and had slipped to a dangerous point, home owners on Pennsylvania Avenue were given 30 days to vacate.

1968: A Committee was formed to decide the future use of Wisconsin Housing Project site. Because of strongly differing views and hot tempers, nothing was resolved. . . 18th Street walkway over the James Lick Freeway was torn down by a dump truck bed that flew up just before the truck passed under it.

1969: January--Trees were planted around Patrick Henry School and, with protective care from the surrounding neighborhood, have survived. Those planted around Daniel Webster didn't make it through the year. . . Another proposal was submitted to the Federal Aviation Administration for a small plane airport at India Basin. . . Almost lost part of the #53 line in order to provide service for the Produce Market and the Hall of Justice. . . An airport was proposed for Islais Creek, again.

March-- 4-7 a.m. traffic was shut down on the James Lick Freeway and a prefabricated overpass structure was put into place to replace the one that was knocked down over a year ago.

April--Freeway land on either side of 18th St. overpass was granted for use as small parks. . . The maiden voyage of the new S.F. MUNI buses was through Potrero with 25 chattering Hill ladies aboard as guests of the City.

November--After many years of trying to get a direct line to Market Street from Potrero Hill, the #19 bus was finally routed to the Hill, south on Rhode Island and north on De Haro Sts. 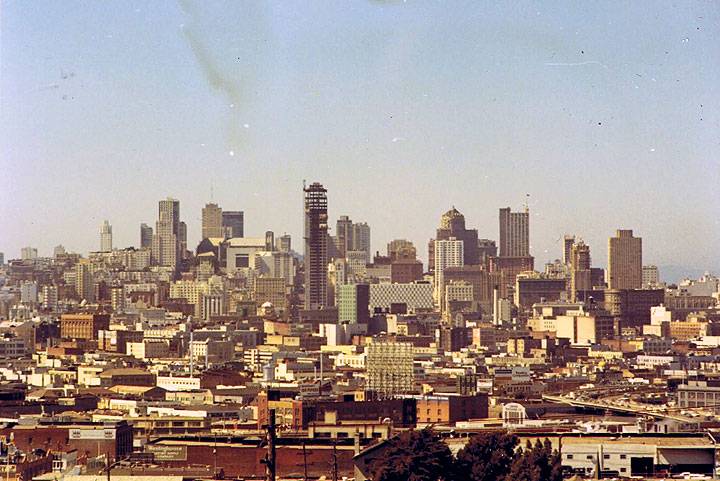 View from Potrero Hill towards downtown while the Hilton Hotel was under construction, 1970.

1970: May--Pennsylvania Freeway damaged homes auctioned off as is. Sitting about 40 feet above the freeway the houses were affected by the settling of earth when the State built a big retaining wall close to the freeway. The freeway cut into the side of Potrero Hill and over the Southern Pacific tunnel, was to double in cost because of repairs to homes and streets and the $100 a day to bus St. Teresa's pupils. This fiasco might have been avoided, if they had only listened. . . A big drive to plant more trees . . . Strong opposition to a store front drug clinic on the main artery of Potrero Hill. . . Pennsylvania Avenue gets underground wiring. . . Almost lost our fire station.

1971: "Fallen Bridge Park" at 18th and Utah Streets was dedicated with a good sized crowd on hand. So named because a dump truck had knocked the adjoining pedestrian overpass from its moorings three years ago. This was the FIRST IDEA of using Freeway land for parks. . . A group of local residents designed, constructed and maintain "The Benches" park at the San Bruno Avenue entry to the overpass. . . Potrero Junior High finally opened for students in the 7th and 8th grades . . . Adult School also comes to Potrero. . . Three blocks at 22nd and Indiana were purchased by the City for motor coach storage and shops. . . Didn't have to change the name of Potrero Hill, the Police Station finally changed its to Southeast. Our good name will no longer be abused. 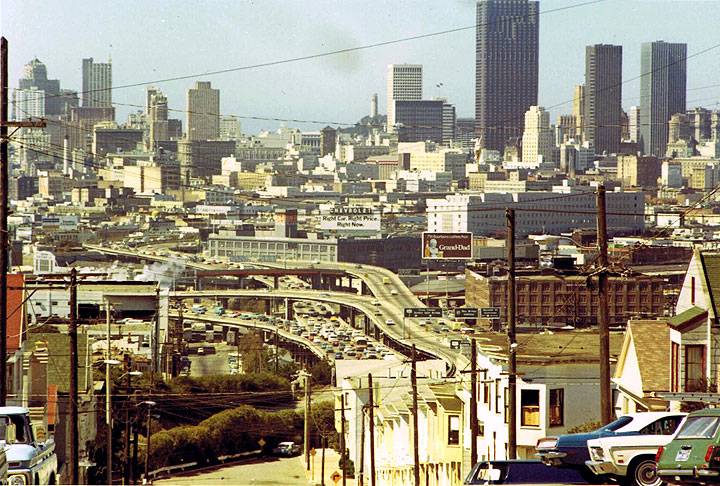 1973: February--Model of new Daniel Webster School presented to parents. . . Jackson and Potrero Hill Playgrounds have outside lights installed. . . #53 MUNI bus extended to 16th and Mission Sts. on weekdays to offer a direct connection with BART.