Local 2 and the Alliance of Rank and File 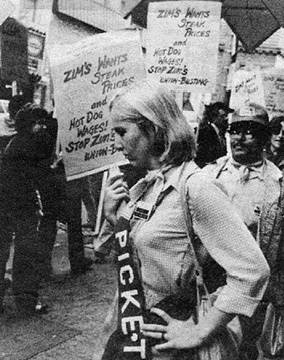 This story of San Francisco's Local 2 of the Hotel and Restaurant Workers Union begins in 1975. But the workers' real history begins almost 60 years ago when workers first unionized. Those who work in restaurants and hotels were first organized into separate craft unions: the waitresses had their own union, as did the waiters, the maids, the cooks, the doormen and the busboys. Since the San Francisco General Strike in 1934, these unions had been very strong, and the majority of workers in these trades were unionized. There were 8,000 members in the waitresses union alone. In the early days, at the time of the General Strike, San Francisco's major industry was the port, but by 1978 the major industry in San Francisco became tourism and the largest union was the Hotel and Restaurant Workers Union. 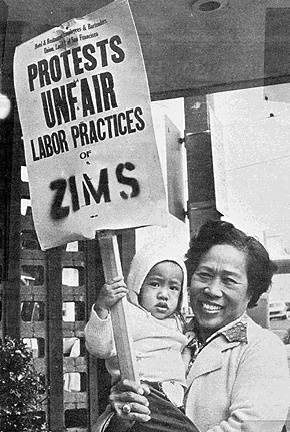 In 1975 the International Union of Hotel and Restaurant Workers merged all of these previously separate unions into one big union. The workers in these unions had no input in this merger of their unions; it was a top-down decision. This lack of democratic process in such a major decision reflects the lack of rank-and-file involvement by the 70s. The union had become a bureaucracy that took the workers' dues and gave little back.

The makeup of San Francisco's workforce had undergone dramatic changes by the time this merger occurred. Many of the workers in the hotels were recent immigrants from Mexico, the Philippines, China and Southeast Asia, speaking little or no English. Most of the union business agents were old-time bureaucrats from the 30s and 40s who spoke English only. Union newsletters were in English only, and all discussions at union meetings were in English only, effectively preventing the participation of the majority of the workforce in the union's business. Workers who had problems on the job had nowhere to go, because the business agents saw their jobs as enforcing sweetheart contracts with the bosses and not as standing up for the workers and their grievances.

The new union president, Joe Belardi, formerly president of the Cooks Union, was a virtual dictator who had been appointed by the head of the International Union, Edward Hanley, not elected by the by the rank-and-file of the union.

This International Union was headquartered in Cincinnati, while the heads of the union lived in Palm Springs and spent their time playing golf with known gangland figures. The International President, Edward Hanley, owed his status to his gangland connections made during his days as a bartender in Chicago, the Mafia heartland. Hanley's administration is famous for having raided the International Unions treasury and the workers pension funds. The FBI investigated Hanley and his associates in 1979. Some of the Hanley appointees were convicted of embezzlement and racketeering and served prison sentences.

Meanwhile back in San Francisco the working conditions for hotel workers and restaurant workers got progressively worse as Belardi signed sweetheart contracts with the bosses, and generally ignored the rank-and-file. The restaurants and hotels however were making big profits, and many workers thought they should be sharing in the largesse they helped to create.

In 1978 a caucus in the Union that called itself the Alliance of Rank and File (ARF) began organizing the Local 2 members to fight for justice and democracy in the union, demanding better working conditions and better representation by the union. They put together leaflets and newsletters in four languages: English, Spanish, Chinese and Tagalog. In the first Local 2 elections, they ran a slate of candidates opposing the Belardi regime, many of whom had been in power since the 1930s. They claimed that workers were tired of paying dues to officials who consistently sided with management when the workers had grievances and that the officials had done nothing but sell them out year after year.

Despite the fact that the Alliance of Rank and File had very little money for their campaign, and the Belardi regime had the big money of the International union behind them, the ARF Slate won overwhelmingly! The ARF Slate won three paid positions: David MacDonald as President, Charles Lamb as Vice President, Winston Ching as Secretary Treasurer. It also put six people on the executive board. It was not a clean sweep, however. Many of Belardi's people remained as business agents and seventeen members of the executive board were still Belardi allies. Immediately upon taking office the new ARF officials met with resistance. The conflicts that resulted made it difficult to deal with key issues effectively and to create the changes they'd hoped for in the Union, like better wages and working conditions for the maids. 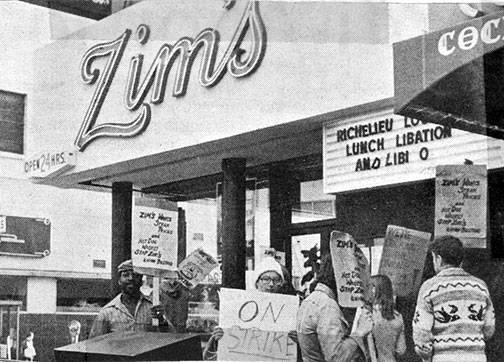 Meanwhile, San Francisco's biggest local restaurant chain, Zim's, was trying to bust the union, by refusing to abide by the union contract. There had been five price increases over a period of five years, with no raises for the workers. ("Steak prices, hot dog wages.") After months during which the owner, Zimmerman, refused to negotiate, the workers decided to take action. With the support of the Alliance of Rank and File officials and other labor activists, Zim's workers staged a series of coffee-ins. In the coffee-in 50 or more people occupied the restaurant, ordering nothing but coffee for a couple of hours (but leaving large tips for the workers). Afterwards the group would picket and leaflet outside the restaurant for another hour, chanting and singing union songs. Sometimes the Bay Area Labor Theater would also perform, creating quite a scene.

Zimmerman refused to negotiate, so early one morning Zim's workers in restaurants all over San Francisco, marched off the job with shouts of "On Strike. Shut it down!" They set up picket lines around all of Zim's restaurants. The picketers marched throughout the long, cold summer and effectively kept customers out of Zim's. Finally, Zimmerman caved in and signed the union contract. Zim's workers and Alliance of Rank and File members were elated.

But the old guard union bureaucrats, Belardi people, had refused to help on the picket lines and raised the level of conflict within the union. Two elected from the ARF slate, Charles Lamb and David MacDonald, weakened in their commitment and joined with the Belardi bureaucrats, asking the International Union to intervene and provide administrative assistance. So at the height of Rank and File activity and success, the International put the union into Trusteeship. This froze the union assets and gave all power to the trustee. The first action of the International's representative, Vincent Sirabella, was to fire one of the officers, recently elected Winston Ching. Sirabella also cancelled all of the executive board meetings, totally undercutting the democratically elected leadership of the Alliance of Rank and File, thus creating another dictatorship run by the International Union.

The membership was outraged by the action, especially the maids and the Zim's workers who had received a great deal of support from ARF members and Winston Ching in particular. The remaining ARF members fought the trusteeship and a federal judge ruled it invalid, but instead of reinstating the elected officials who had been fired, he ordered that there should be a new election.

In the meantime the hotel workers--who had been ARF's strongest base of support--had reached the breaking point over their wages and working conditions and were clamoring for change and a better contract (they had had the same contract for 36 years!) They had to work eight-hour days without breaks, had no sick leave, no vacations and were treated like slaves and animals. In 1980 they voted to strike, and at the height of the summer season they walked off the job in a very militant strike. By this time Charles Lamb, now collaborating with the International, had been voted in as president. In spite of his promises to improve working conditions, he sold out the maids with a very poor contract and they saw little improvement in their wages and working conditions.

After the Hotel Strike many of the Alliance of Rank and File members felt burned out after seeing years of their organizing efforts go down the drain. They'd been elected in a democratic election only to see that election overthrown by the International. One of their former members, Charles Lamb, collaborated with the International and ran as the International's puppet candidate in the new election and won! Finally, after leading a militant and effective strike at Zim's, the union officials like Charles Lamb sold out the hotel workers and the Alliance of Rank and File could do nothing to change it.

Many of the activists kept on pushing for change. For decades restaurants in San Francisco had been unionized and worker's contracts were negotiated with the Golden Gate Restaurant Association. In 1984 the Association decided to bust the union in San Francisco. They hired two big law firms to assist them. The Association proposed a new contract with so many take-aways that the workers went out on strike. But the strike was not well supported by the union. Picketers got $50/week and a bag of groceries. Restaurant owners threatened foreign workers with calling the INS, and many-- fearing deportation--went in to work. After the strike was over the scabs got the better shifts, many senior employees who'd supported the strike were forced out. Many restaurants got rid of the union altogether by selling the restaurant to another family member then reopening as a non-union restaurant. Today the number of union restaurants has dwindled to very few, and the Hotel and Restaurant Workers Union now represents mostly hotel workers. Since the Trusteeship all of the elected officers have been hand-picked by the International, and the dreams of rank-and-file control of the union have faded away. Many former ARF members are still playing important roles in Local 2 struggles, and still get support from rank-and-file labor activists from other unions when a crisis arises.