Originally published under the title "Lawrence Halprin and the Public Realm: Can the United Nations Plaza Unite San Franciscans?" 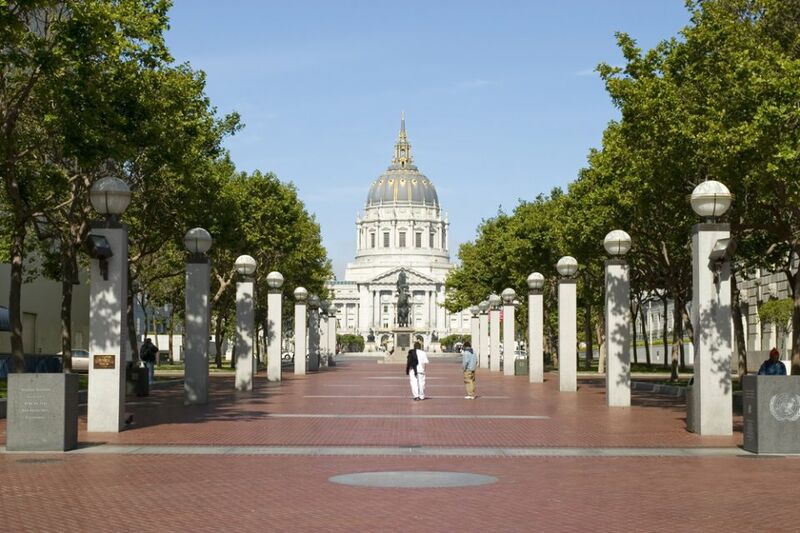 Designed as a fitting gateway to San Francisco's Beaux-Arts Civic Center, United Nations Plaza has become a place where homeless persons congregate and illicit behavior is the norm. The city’s newfound prosperity can support services for the homeless that will allow them to be a welcome part of a diverse mix of people enjoying this elegantly designed outdoor space that links important parts of the city’s center.

This story about San Francisco's United Nations Plaza, designed by landscape architect Lawrence Halprin, was motivated by a visit to The Cultural Landscape Foundation’s Halprin exhibit, at San Francisco’s Palace of Fine Arts in 2017.

United Nations Plaza is important historically and as an urban landscape design. Beginning his career in the San Francisco Bay region in the late 1940s, Lawrence Halprin was influenced by the Modernist city planning ideas of Walter Gropius and Marcel Breuer and by the idealism of the Works Progress Administration's park and parkway programs (pdf) under President Franklin Delano Roosevelt. Halprin tried to moderate the effects of post-World War II urban abandonment by creating social and pedestrian spaces. In the 1970s, Halprin and his team created a series of public spaces designed to be comfortable for pedestrians along San Francisco’s Market Street, the main commercial thoroughfare and the spine of the city’s rich transit network. The 2.5-acre United Nations Plaza responded to the sad state of Market Street’s distressed mid-section by creating a gateway to the city’s Civic Center, a Beaux-Arts civic icon inspired by the City Beautiful movement at the turn of the 20th century. 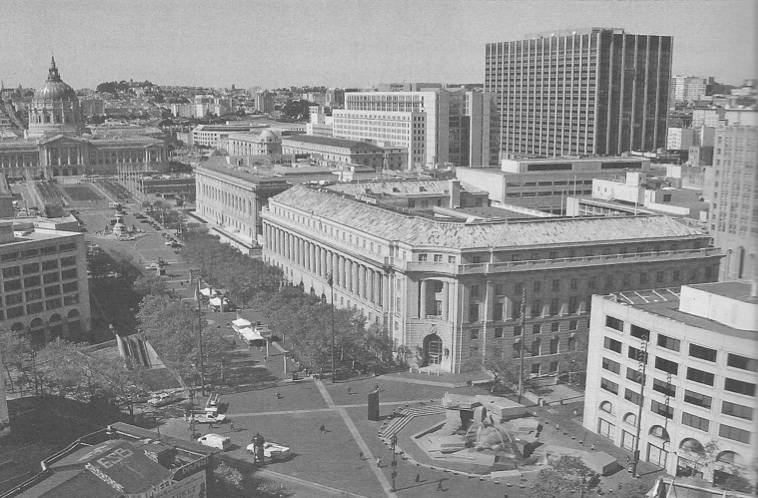 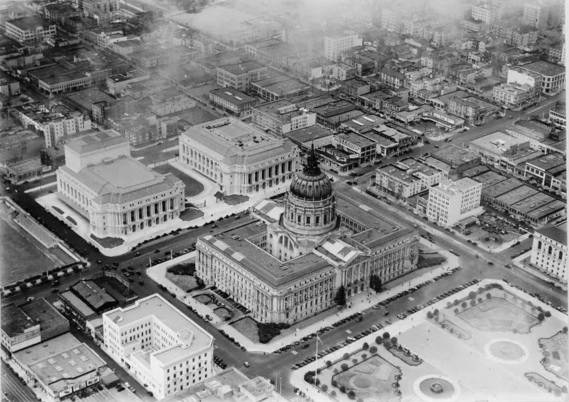 The San Francisco Civic Center in 1933.

Photo: taken from Goodyear Blimp, courtesy of the Library of Congress

The plaza was dedicated in 1975 to celebrate the 50th anniversary of the signing of the United Nations Charter in the Civic Center’s Veteran’s Building. The plaza was built at a time when Market Street was being reconstructed to accommodate multi-level underground tunnels for the city’s streetcar system and the Bay Area Rapid Transit system, with a station for both at the plaza. Tree shaded columns inscribed with the names of the United Nations member countries are at the plaza’s western end; a sunken fountain sculpted from large asymmetrically stacked Sierra Nevada granite slabs representing the seven continents of the world is at its eastern end. Water jetting from the slabs represents the oceans, with the computer-programmed water level in the fountain’s 100-foot-wide basin intended to simulate the tides. The goal of this elegant allée, or tree lined pathway, connecting Market Street to City Hall was to bring government workers, concert and theatergoers, transit users, and area residents together in a space designed for ceremonial gatherings as well as everyday outdoor relaxation. 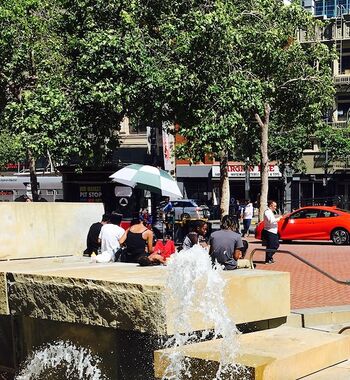 Three miles long and 120 feet wide, Market Street cuts the city at a diagonal, linking the water to the hills, the Embarcadero to Twin Peaks. In the pre-World War II era, Market Street was one of the world’s great streets, with a financial district at the waterfront transitioning to a shopping district, and then to the city’s fabulous theaters and its entertainment venues. By the 1950s and 1960s, Mid-Market was blighted. Theaters that escaped demolition were showing porno films and featuring live nudes. To the north, the Tenderloin had become a tawdry district of single room occupancy hotels, street prostitution, and open drug dealing. 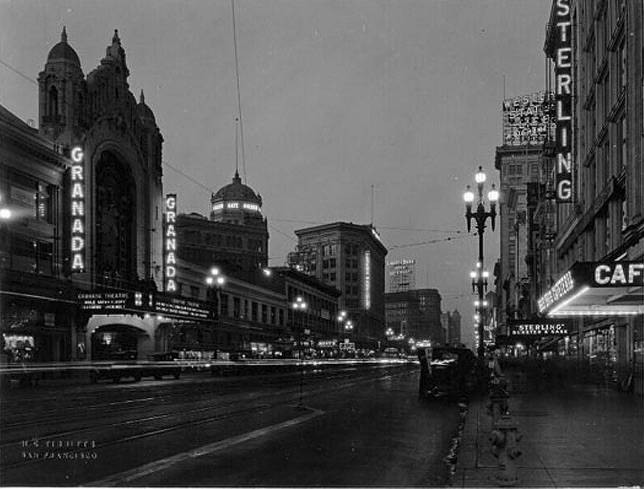 The sociology of the city undermined the goal of creating a public place to be enjoyed by diverse users. William H. Whyte based his solution for co-existing with persons whose public behavior can be off-putting on lessons learned from extensive observation of people in New York City’s streets and plazas: outnumber them by making a public space as welcoming as possible to all. United Nations Plaza was never overly furnished, because it was intended to be a pedestrian pathway from Market Street and the BART station to the many activity nodes within the Civic Center, but removing the 24 existing benches and erecting barriers around the fountain as a response to further deterioration in street life in the 1990s did not make the space more welcoming. In 2005, when San Francisco was chosen as the site of World Environment Day to recognize the 60th anniversary of the signing of the UN Charter, Mayor Gavin Newsom had the barriers around the fountain removed. There are still no benches in the plaza, but a farmer’s market, a gift gallery market, and food trucks attract crowds most days of the week. 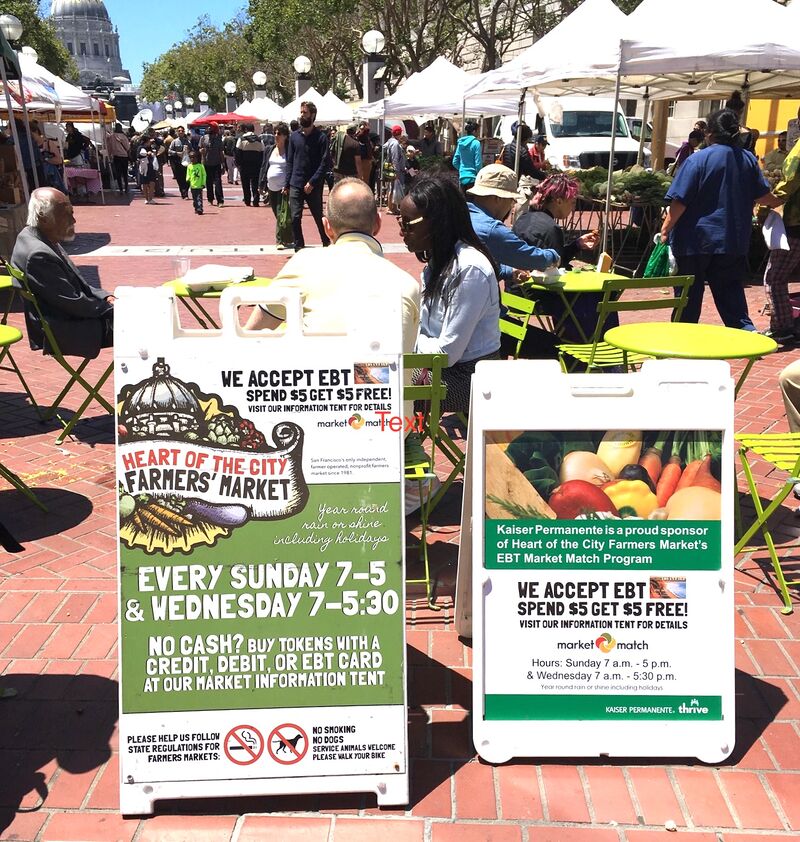 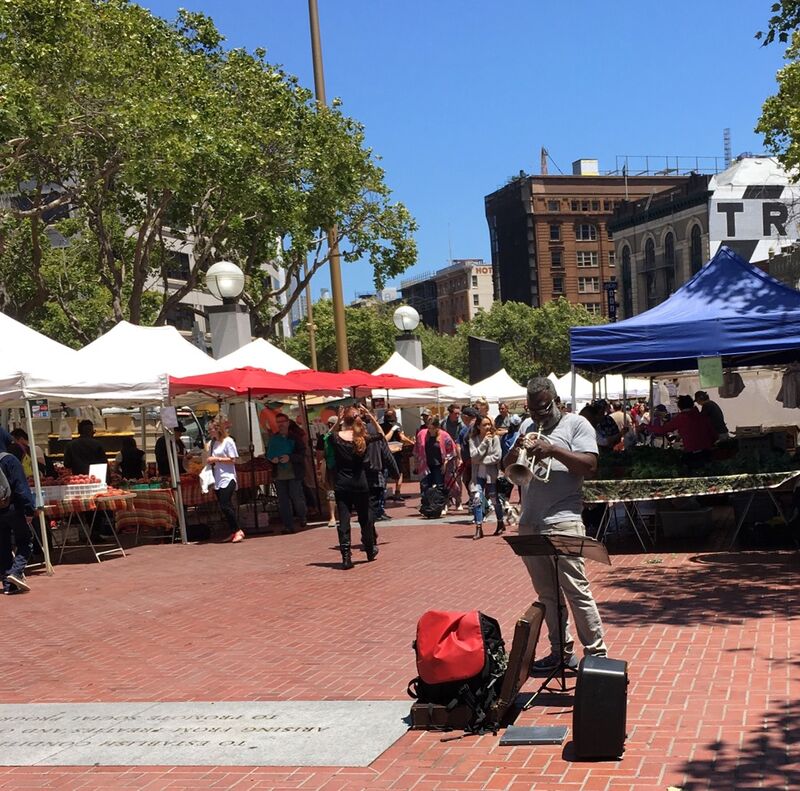 Now, with optimism born of economic vitality and more abundant fiscal resources, the city is investing in Mid-Market Street. In 2011, the city lured Twitter with an exemption to San Francisco’s payroll tax. Tech companies like Yammer, Spotify, Square, and Zendesk are also in the neighborhood. Supported by the city’s creation of a Mid-Market arts district, arts organizations such as the American Conservatory Theater (A.C.T.) are reclaiming vacant and underused buildings. New market rate and affordable housing is coming on line. The city is working on its Civic Center Public Realm Plan to implement improvements that will make the area safe and appealing for residents, area workers, and visitors. 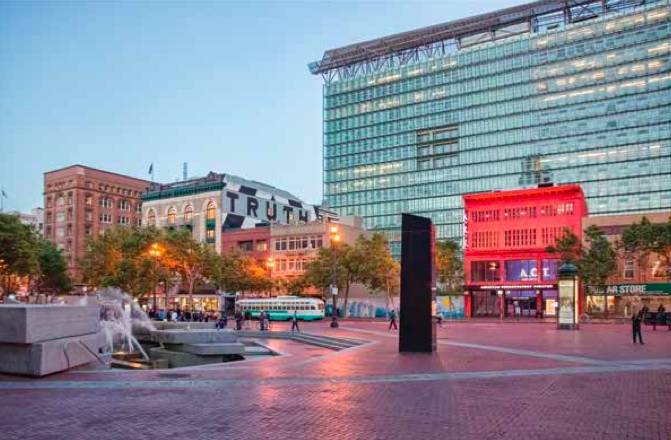 Image by Christina Dikas, courtesy of the Cultural Landscape Foundation.

Tech workers, new residents, and arts patrons may add the numbers necessary for United Nations Plaza to be a city place for all. But people must have a place to sleep, bathe, use the toilet, and, if necessary, inject drugs. Until persons using the plaza are supported in their basic human needs, only those without other choices will spend unnecessary time in the plaza. The city has created a Department of Homelessness and Supportive Housing and has increased the amount of money budgeted for homeless services. Three Navigation Centers where beds and all available services are brought together in neighborhood settings, one near the Civic Center, are open, and three more are scheduled to open this year. The Pit Stop program operated by the San Francisco Public Works department provides public toilets, sinks, used needle receptacles, and dog waste stations at the plaza daily from 9 am to 8 pm. 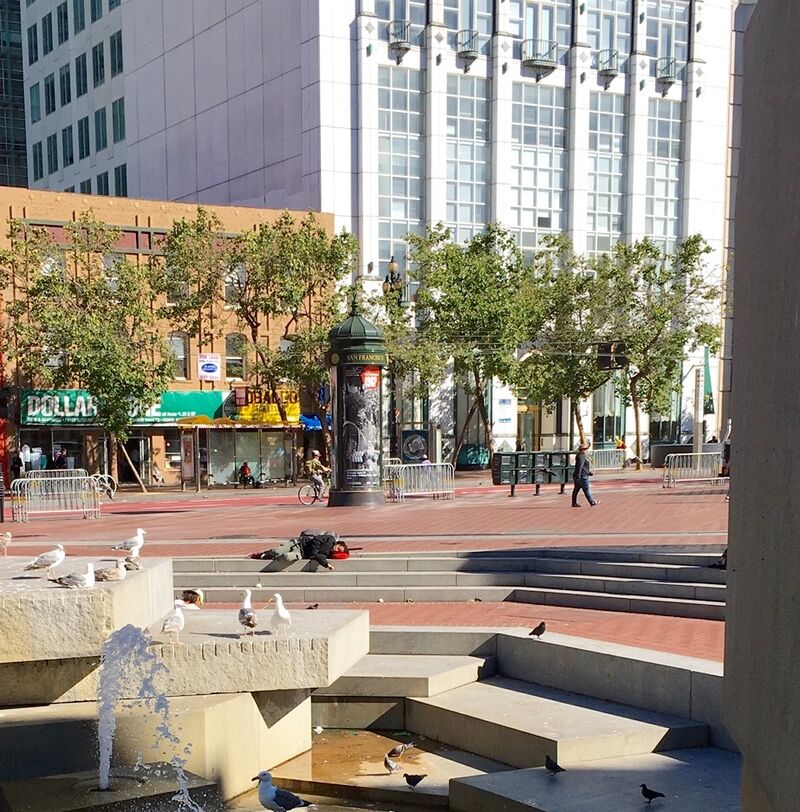 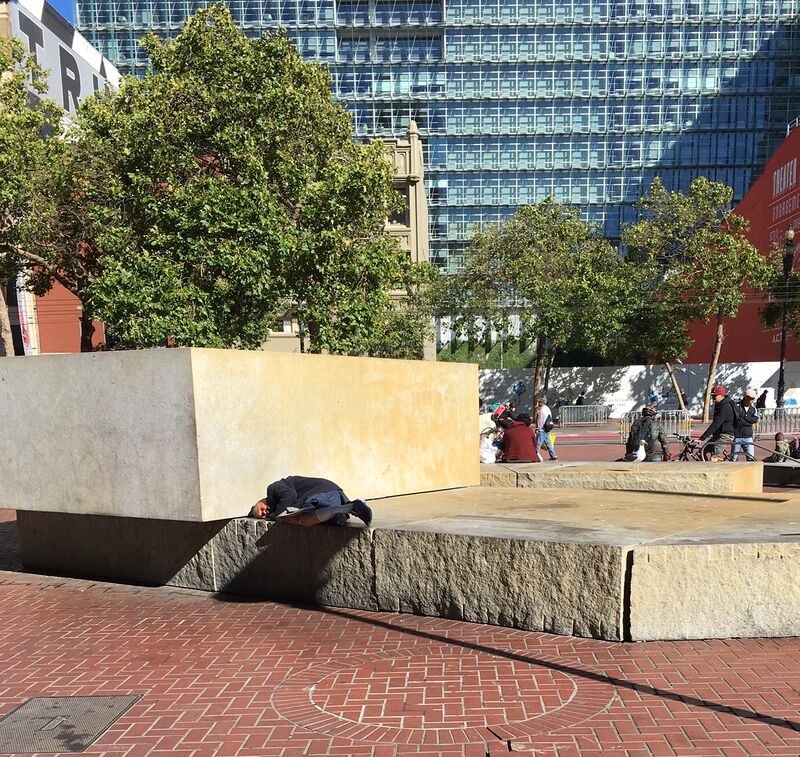 Halprin succeeded in his goal of bringing the beauty of California's landscape into the city center. After more than 40 years of consternation over the social life of the plaza, there is some reason to be optimistic that the city's newfound prosperity can turn the tides for a plaza with a fountain designed to simulate the tides. The city is sincerely committed to supportive housing for the homeless and affordable housing for persons with modest income. The new, young, tech-savvy work force appears to be able to inhabit spaces with others who are not just like themselves. United Nations Plaza serves as a pedestrian pathway with classic vistas and a space for commerce that supports the small guys—the men and women who sell farm produce and handicrafts from around the world. In the heart of San Francisco, the Civic Center serves as its heart; it is a place to protest on behalf of the rights of all Americans and to celebrate their victories. 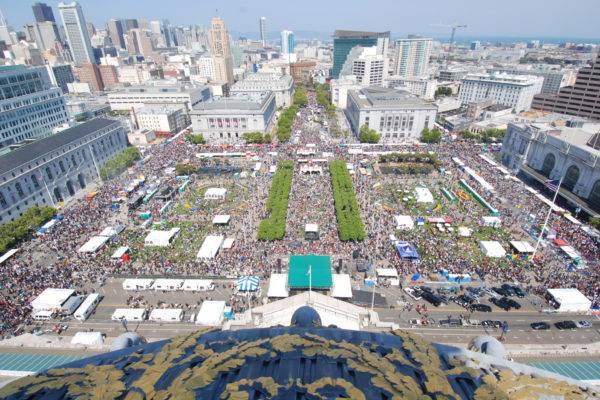