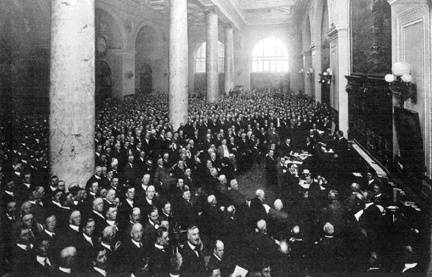 Mass meeting of 2,000 merchants, business and professional men of San Francisco, July 10, 1916, on floor of the Merchants Exchange, leading to the formation of the Law & Order Committee of the SF Chamber of Commerce. Within months the new committee had received over $1 million to pursue its campaign against organized labor. Image: San Francisco History Room, SF Public Library, San Francisco, CA

On July 10, 1916, the San Francisco Chamber of Commerce held a mass meeting of over 2,000 merchants to organize business resistance to union power. Specifically, though never stated directly, the Chamber created a Law and Order Committee to break the wave of labor insurgency in 1916 and bring to San Francisco the open shop conditions that prevailed in Los Angeles.

July 10 was also the deadline set by structural steel workers for a strike if their employers didn't grant the 8-hour day by then. Fifty-four of 64 companies agreed before the deadline, but a consortium of the remaining ten companies entered into an agreement, including the posting of bonds from $1,500 to $10,000, to resist and lock out the unions. The Chamber's Law and Order Committee quickly gathered funds, over $1 million by the end of 1916, and entered the steel strike on behalf of the ten holdout companies (who were responsible for over 90% of San Francisco's structural steel).

Workers in San Francisco had seen their average 16% wage increase since the '06 earthquake far outstripped by the 39% rise in the cost of living during the same period. By July 1916, longshoremen on the SF waterfront were on strike, as were bay and river steamboat operators, auto mechanics, and culinary workers were threatening to strike. Tom Mooney and Warren Billings, in association with a clandestine committee of streetcar workers, were trying to unionize the employees of the United Railroads municipal streetcar system.

Frederick Koster, president of the San Francisco Chamber of Commerce, called the July 10 meeting to outline a plan to "control the intolerable situation on the waterfront," but the real goal was a frontal assault on union strength and the closed shop. When the Preparedness bombing took place on July 22, the tense class war atmosphere helped rally support to the Chamber of Commerce. On July 25, the struck steelworks announced their intention to reopen using scab labor with the support and armed protection of the Law and Order Committee. But only three weeks later four of the 10 struck companies broke rank and signed 8-hour agreements with the unions. Years later in 1920, a lawsuit led to testimony that the four companies had been coerced into participating in the lockout. The Law and Order Committee had threatened that "arrangements had been made with railroads, banks and other companies so that any employer who did not join in the organization would find his materials sidetracked, delayed and missent; banks would call his loans, and he would be driven out of business." (SF Chronicle 7-1-20, p. 17, cited in "The Battle for the 8-hour Day in San Francisco" by Steven C. Levi, California History winter 1978/79, Vol. LVII, No. 4)

Mayor James Rolph got involved, and though taking a neutral position, he nudged the steel companies toward signing the 8-hour deal. By late 1916 no deal had been made, even though the Law and Order Committee had succeeded earlier that fall in breaking the Longshore strike and a lumber strike. The Chamber of Commerce had increased dramatically its membership and was now the largest in the U.S. But Mayor Rolph remained independent and was openly critical of the vigilante-like Law and Order Committee. When Rolph arranged to mediate the dispute during its appearance on the construction of a new wing of the General Hospital on Potrero Avenue, the Law and Order Committee placed armed guards under discharged former police chief George Littown (who was implicated in the Ruef era graft scandals) to protect the Dyer Brothers Steel Company job site. The city ordered the armed guards off the premises and seized the job from the scab-bound Dyer Bros., and set about finishing the job with public money and union labor.

When this effort to break the steelworkers' strike failed, the Law and Order Committee withdrew and by January 1917 all the companies had signed 8-hour deals with the unions, preserving the closed shop. The Law and Order Committee's reputation was sinking as its links to the frame-up of Tom Mooney and Warren Billings were gradually revealed, until finally in August 1919 the Chamber of Commerce formally dissolved the association. 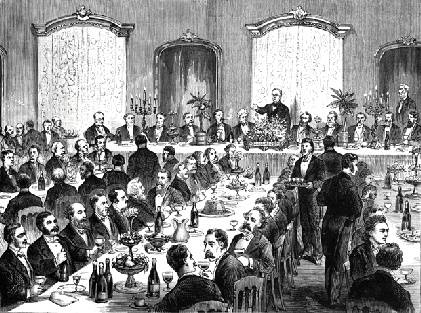