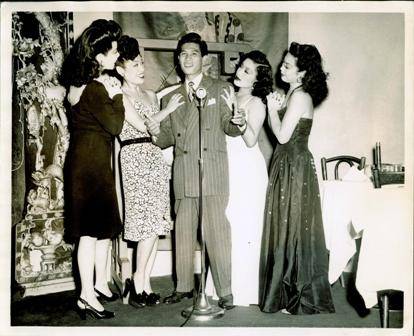 Larry Ching was born on the Hawaiian island of Kauai in 1921. His mother Muilan Naiwi was an opera singer who pursued her studies in Europe, leaving Larry to be raised by his father. After graduating high school, he joined the merchant marine, sailing to all the major ports of call around the Pacific Rim. One of his regular stops was San Francisco, and he never missed a chance to visit the nightclubs in Chinatown.

The nightclub scene was really starting to hop just at the time that Larry arrived. Both the Forbidden City and the Club Shanghai had just opened when Larry took a $40-a-week job as a bartender at Chinese Village. He honed his singing style behind the bar and boasted later, “I became the first singing bartender in Chinatown.”

In 1940, Forbidden City owner Charlie Low hired Larry to appear in the “All-Chinese Floor Show” at his nightclub. Larry – with his suave demeanor, smooth singing style, and easy good looks – quickly became one of the club's most popular entertainers. He performed six nights a week, singing the most popular tunes of the day accompanied by the top-notch band led by Monte Monteverdi. 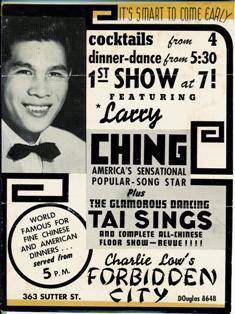 Dancer Stanley Toy said of his friend, “"I'd be talking to a pretty girl and then Larry would start to sing, and it was all over for me. If she wanted to dance, Larry would step out with her, but if it was an old, fat, ugly one, he'd lead her over to me and say, 'Stanley, you're the dancer!'"

Charlie Low, the master of marketing, billed Larry as the “Chinese Frank Sinatra,” a title the singer intensely disliked. Many Chinese nightclub performers were marketed this way, matching them up with a popular white act to entice white audiences. The message sent sometimes felt as if the “Chinese” acts were meant to astonish white audiences, who might not believe that an Asian person could sing like Frank Sinatra or dance like Fred Astaire. But some San Franciscans looked past these labels, valuing the Asian performers for their own talents and charm. San Francisco Chronicle columist Herb Caen turned the label on its head, writing that “'Frank Sinatra is really the Italian Larry Ching."

There was, of course, more overt racism to be confronted. Living and working in San Francisco throughout his life, Larry had the support of a strong Chinese-American community. But white audiences brought their prejudices into the clubs with them, and sometimes did not check them at the door. Larry, for one, struggled to stay cool when bigots attacked him. "Several times I lost control of my temper when some drunken customer called me 'Chinaman,"' he recalled. Occasionally he would get in a fight, but most of the time, he said, "I just had to take it." 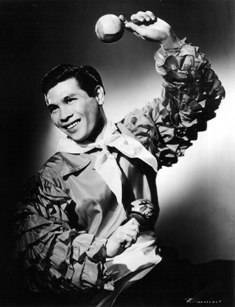 Larry Ching performed at the Forbidden City for more than ten years. During that time, he had the opportunity to meet many celebrities who trooped through the club, including Bob Hope, Bing Crosby, Duke Ellington and Lena Horne. He also met his wife, Vicki Lee, who performed in the chorus line there, in 1947. They had two sons, Michael and Philip, and raised Vicki's son David from a previous marriage. They both performed at the Forbidden City until Charlie Low sold the club in 1961.

His stepson David Gee recalls the story Larry told about choosing not to leave San Francisco for the “big time”, “Hoagy Carmichael offered him a job to go to Hollywood and be his front man, in other words, opening act for his show. And the only reason he didn’t go was my mother didn’t want to go. So he stayed back. But he could have made it in Hollywood, had he gone with Hoagy.”

Larry's work experience after the end of the nightclub era was quite typical – unable to find work as an entertainer, Larry got a job as a truck driver for local newspapers. He did this work until his retirement in 1985.

Larry was featured in Arthur Dong's 1989 documentary, “Forbidden City,” which brought attention to the long-forgotten Chinese nightclub scene. After having been offstage for over 20 years, Larry started singing at benefits and small gigs. In 2003, he and producer Ben Fong-Torres released Larry's debut album, " 'Til the End of Time." The album features classic love songs and standards from his native Hawaii, as well as a handful of his recordings from the 1940s. Larry died just two weeks after the release of the record.

Images courtesy of the Ching family.