As we have said, there were no homes at this period in San Francisco, and time was too precious for any one to stay within doom to cook victuals. Consequently, an immense majority of the people took their meals at restaurants, boardinghouses and hotels--the number of which was naturally therefore very great; while many lodged as well as boarded at such places. Many of these were indeed miserable hovels, which showed only bad fare and worse attendance, dirt, discomfort and high prices. A few others again were of a superior class; but, of course, still higher charges had to be made for the better accommodation. At best, all were inconveniently crowded, heated and disagreeable. The whole population was constantly moving, and always visible, which added greatly to its apparent numbers. If only people did not sleep in public, they at least worked, ate, and amused themselves in crowds. But even at night, they lay from half a dozen to two score in a room, on the floor, in rows of cots, or contracted and filthy bunks fastened to the weather-boards from floor to ceiling, in which were immense swarms of fleas and other troublesome vermin. At some lodging-houses, and hotels every superficial inch-on floor, tables, benches, shelves, and beds, was covered with a portion of weary humanity. 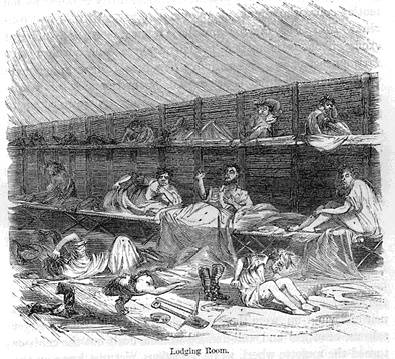 Lodging in a cheap boarding house 1849

While wages and profits were so high, and there was no comfort at their sleeping quarters, men spent money freely at different places of riotous excess, and were indeed forced to pass their hours of leisure or recreation at drinking bars, billiard rooms and gambling saloons. Such places were accordingly crowded with a motley crew, who drank, swore and gained to their hearts' content. Every body did so; and that circumstance was a sufficient excuse if one were needed, to the neophyte in debauchery. To vary amusements, occasionally a fancy-dress ball or masquerade would be announced at high prices. There the most extraordinary scenes were exhibited, as might have been expected where the actors and dancers were chiefly hot-headed young men, flush of money and half frantic with excitement, and lewd girls freed from the necessity of all moral restraint. A concert or a lecture would at other times help to entertain the weary spirits of the town. But of all their haunts, the gambling saloons were the most notorious and best patronized.