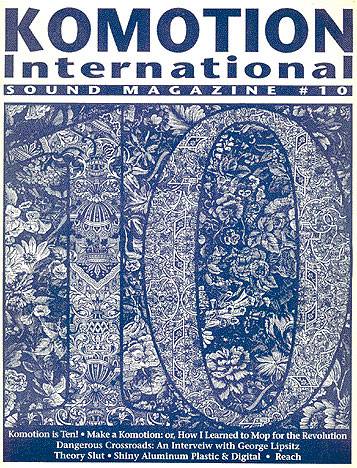 We're standing outside keeping an eye on a group of kids who'd earlier tried to crash a Citizen Fish show. They were hurling insults and gobs of spit when Dave MDC comes up and engages a couple of them in conversation imploring them to respect what we're doing, blah, blah, blah. Finally his fuse burns down and punches start flying. The two Komotion people (myself and Greg of the Bedlam Rovers) try to cool out the violence but it quickly erupts into an all out brawl. Li'l Mike pokes his head out the door and -- I'll never forget this -- says, "Is everything all right? ... Holy shit!" and slams it shut. (We had earlier agreed that the door had to be kept closed at all costs to maintain the appearance that nothing was going on inside) A cop car arrives as the fight involving about 20 people spills into 16th street. I rush over to the cops who've jumped out of their car with nightsticks raised to intercept this new threat. One of them says to me, "Are you in charge?" while behind us a melee ensues. I say as calmly as I can, "Officer, we're just having a little party inside and these guys came down to give us a hard time.

I think everything's under control ... " Just then a body slams into me and I'm thrown into the arms of the cop, who, believe it or not, starts laughing! He shoves me aside and wades into the crowd with his partner and starts herding the suddenly obedient gate-crashers down the sidewalk away from our building. I vividly remember thinking, "These pathetic little cretins were just calling us fascists and when real fascists arrive, they fold up and whimper down the block like whipped dogs." To our utter amazement the cops don't even look inside. The show continued without incident (I heard it was great) and, though we had to remain outside guarding the door the remainder of the night, it ended quite smoothly. The two hundred-plus folks left quickly and quietly offering their thanks and support (they'd heard about what was happening). My stomach was in knots but I was quite moved.

Among the many questions this raised were two that we had never been forced to deal with before. The first was the fact that it had been the police, our enemies, who had actually come to our aid in handling a problem caused by people supposedly our friends. The second was to become a perennial controversy and it remains one to this day: who are these people and why do they come here -- or -- does anybody really get what we're trying to do?! These questions were never fully answered. Shows continued apace and got even wilder (without the violence, thankfully). We managed to keep dancing through the mine fields of culture, commerce, officialdom and opposition. But this particular incident followed only too soon after the first actual shutdown of our operation. We had dodged the bullet but a clock was ticking.

It was in this charged climate that a particularly significant event was organized. I cannot improve on the description contained in Newz8Reviewz (Sound Mag #6) so I will quote liberally: " ... August 7, an event titled 'What's Our Mission?'

"For many of us at Komotion this night exemplified what Komotion strives for. The show, in the opinion of most I talked to, had a unified positive vibe. It started with R.I.P., a powerful expressive video dealing with crack in SF projects, as well as a second video on homelessness and squatting in SF. Next was spoken word with Peter Plate, Devorah Majors, and Alejandro Murguia. Then we had music by Malambo Kombo, Kofy Brown MC and J-Church. The money made went to La Casa de Las Madres, a shelter for battered women and children.

"We occupy a place, only five blocks from the Mission that was the original Spanish settlement here, which has enabled us to interact with an incredible hodgepodge of social groupings, not to mention wild individuals! Having been here this long has actually made us part of this larger community in ways none of us could have predicted. So, while it certainly doesn't "belong" to us, it is very much "our" place."

At that point in time it was seven years and counting Komotion had been in existence. The success of "What's Our Mission" rejuvenated us in more ways than one. It galvanized a spirit that had dissipated somewhat as our ranks grew in number but changed in experience and interest. It revitalized a commitment to the kind of experimental programming that had given us purpose and pleasure from the start. It yanked us out of a drift toward shows that were only to pay the rent (hence a reliance on rock of one sub-genre or another) and it reaffirmed our conviction that what we were doing continued to be relevant even as oppositional forces splintered and flew apart in the face of increasingly virulent attacks from the powers that be.

The next two and a half years things moved in many directions at once. Dancing reentered the building in a big way from Friends and Family to Club Freaky, from Raves to Queer House Parties. Recording and magazine publishing took on lives of their own involving more and more of the energy of specific teams within the collective as a whole. Our capacity was being stretched to the limit both in numbers of attendees at shows and in terms of time and energy available to do all the work required for each project under our roof. Furthermore, numerous bands who had been absolutely crucial in terms of their participation in the life of the collective were either growing in popularity (and touring more), moving out or simply ending. The Looters were no more. The Rovers and A Subtle Plague were going to Europe more often. Strawman was headed in the same direction. President's Breakfast was constantly evolving, oscillating between great activity to little or none. Lots of people were coming into the studio to record and, in some cases, to get involved, but the demands of their own projects prevented them from really taking on the kind of responsibility that any operation on the scale requires.

Also, life and death had taken a surprising toll. When Big Jim died a void opened that was never filled. He'd contributed so much to the spirit of the place no one could really measure the damage brought about by his passing. Numerous other key people, too frequently battered and embittered by the music business, had gone out into the wider world to seek their calling in fields beyond the clutches of A&R men and program directors, agents and promoters, managers and critics. No one person at any one time made a decisive difference. (In fact, at times as many as forty people were actually involved in organizing the monthly activities of Komotion.) Nonetheless, a point was reached where coincident with the final visit of the Fire Marshal (October 94) we had undergone so much stress from growth and conflict that something had to give.

Chance had often been our ally. But though many were the gracious souls who offered and gave precious skill and labor (and still do!) there was not to be any savior at this crossroads. With amazing consistency we had been pulled from the abyss by happenstance: a random meeting that led to a major donation or studio project that would cover our asses 'til the next crisis; a particularly successful event that would defy all logic and inspire us to carry on. Not this time. The ticking clock hit midnight and the alarm went off jarring us into the early morning of another day; another kind of day. No more shows. No more benefits. Perhaps no more Komotion.

Months of discussions, proposals, experiments, searches for new spaces, etc., all led to the conclusion that something different than we had ever undertaken was before us. The studio continues to thrive. The magazine you're reading now has brought together a new community of writers and artists who need its pages just as musicians needed Komotion's stage. We've launched a record label which has only begun to find its way through the traps and snares of the "Industry." Something has ended but something else has arisen from the wreckage.

Pressing on into the dimly lit future, as full of problems and promise as the past ever was, aspects of what made us do what we did and become what we've become need emphasis. Start with the name: Komotion International. Always about turmoil, always about opposition to privilege, always about challenging everyone's preconceived notions -- including our own. Always about dance and music and celebration and exploration. Always seeking, through cooperative effort, to create relations among people that are not exploitative. Skanking not ranking. And then there's the International part. Not nationalist, "multiculturalist," patriotic or any other name that may be assigned in the scramble for territory and position. (Or, for that matter, rights under the Constitution.) Borders and boundaries, labels and categories serve to divide and conquer the hopes and aspirations of the sufferers of the world, amongst whom we find ourselves. We want liberation. And by any means at our disposal. Revolution? Depends on how you define it. But if it means people at the bottom of society doing whatever they have to, to rid themselves of their oppressors, we support it. On the other hand, if it means "Here comes the new boss same as the old boss," then later, man. We've been lied to enough.

There is more to come. In whatever way we mutate to continue growing it will be to kindle this spirit and to nourish these ideals.