Listen to an excerpt from "Jung Sai Garment Workers Strike of 1974: 'An Earth-Shattering and Heaven-Startling Event'" read by author Harvey Dong:

Impressed by the resoluteness of 135 striking Chinatown garment workers, the Chinese Times wrote an editorial in its July 27, 1974, issue entitled “Chinese Women Workers of the Great Chinese American Sewing Factory Demonstrate Against Exploitation.” The editorial stated, “Unexpectedly, these once subservient che yi ah shen ah mu (sewing factory aunties), once considered ru gao yang zhi fu (as subservient goats and sheep) are demanding their rights. They have been shouting, clapping, shouldering picket signs and demonstrating against the exploiting class. This is a shi po tian jing (earth-shattering and heaven-startling) event and has created a new page in Chinatown history.” 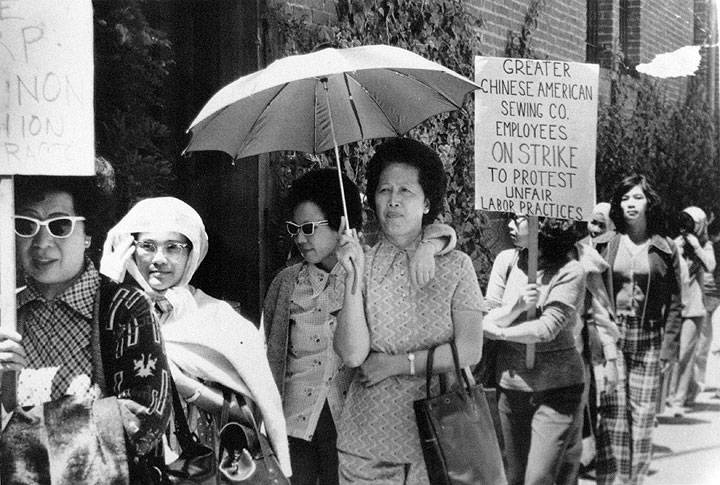 Located at 646 Washington Street in San Francisco, the Jung Sai factory was a large Chinatown plant owned by Esprit de Corps, a manufacturer and designer of contemporary clothing for young people. In Cantonese, Jung means Chinese and Sai means West but the factory name was translated in English as “Great Chinese American” (GCA). The combination of the two characters, Jung and Sai, projected a meaning of symbiotic cooperation between the Chinese employees and Western management. But to the workers, the term “Jung Sai” represented harassment, intimidation, speed-ups, lack of breaks, and low wages. To the women, “Jung Sai” was a metaphor for the one-sided power of Western manufacturers over Chinese immigrant labor—an imbalance that had to change. 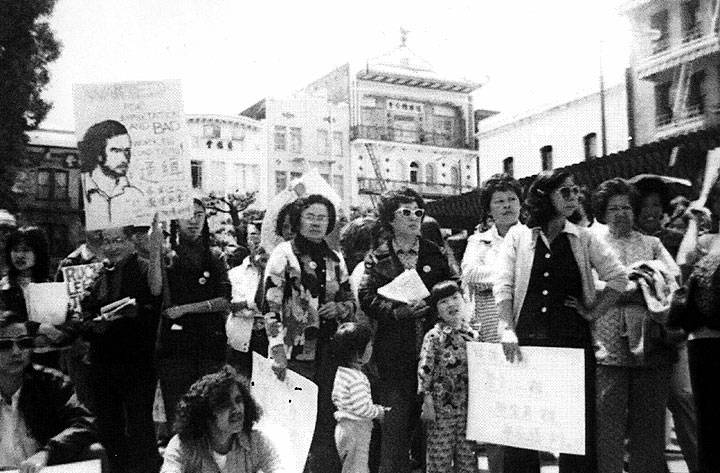 135 strikers from the Chinatown Jung Sai garment factory rallied at Portsmouth Square in 1974.

The workers’ subsequent strike redefined that relationship. Whenever Jung Sai was mentioned after 1974, community residents associated the words with workers’ resistance. What began as a single-issue unionization strike in one factory evolved into a multi-faceted campaign against exploitation and oppression of Chinese immigrants.

by Harvey Dong, from his essay "Jung Sai Garment Workers Strike of 1974: 'An Earth-Shattering and Heaven-Startling Event'" in the anthology "Ten Years That Shook the City: San Francisco 1968-78" (City Lights Foundation: 2011), edited by Chris Carlsson.