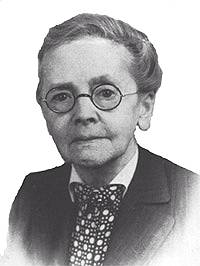 Julia Morgan was a Bay Area native, born in San Francisco on January 20, 1872 and raised in Oakland. Her father Charles B. Morgan was a mining engineer from New England who first sailed around the Cape to San Francisco in 1867, returning back East to marry Julia's mother, Eliza, convinced that their future was brighter in the Golden State. Julia was the second of five children born in California to Charles and Eliza, three boys and two girls.

Julia attended Oakland High School, graduating in 1890. With a strong mathematical interest she enrolled at U. C. Berkeley, in the College of Engineering. In her senior year Bernard Maybeck, then 32, was hired to teach descriptive geometry and he initiated a series of informal architectural seminars for his favorite students. He became a positive influence on Julia and others, encouraging them to study at the prestigious École des Beaux-Arts in Paris which he had attended ten years earlier. Julia went to Paris in 1896, learned French, and passed her entrance exams in the fall of 1898, becoming the first woman ever admitted to the architectural division within the École. She chose the atelier of Benjamin Chaussemiche, 1893 Grand Prix de Rome winner, considered to be one of the finest of the younger French architects. After three years hard work Julia earned her diploma in February 1902.

Morgan returned to the Bay Area in 1902 and worked initially for John Galen Howard at U. C. Berkeley, assisting him on the construction of the Greek Theater. But her ambition was to open her own practice. She took the State licensing exam and was certified to practice as an architect in her own right in 1904. She opened her first office at 456 Montgomery, a building demolished in the earthquake of 1906. In 1907 she moved into the Merchants Exchange Building (465 California) initially with Ira Wilson Hoover as a junior partner, but from 1910 listed simply as Julia Morgan, Architect.

Her first major project after the April 18, 1906 earthquake was the reconstruction of the badly damaged Fairmont Hotel, which had been designed by the Reid Brothers and was very close to opening at the time of the earthquake. Morgan supervised its repair for owners Herbert and Hartland Law so that it reopened on the one-year anniversary of the earthquake.

Morgan designed over 700 buildings in her 50-year career, many of which were Arts and Crafts houses, particularly in Berkeley, Oakland and Piedmont. She was highly regarded, especially by women, which led to many commissions for women's clubs, residence halls, and YWCA's (five in San Francisco alone, including the interior of the YWCA for the 1915 Panama-Pacific International Exposition).

From two existing structures she very creatively removed upper stories. The first was at 1055 Green Street on Russian Hill where she did so for a client in 1916. The second was her own property in Pacific Heights, which is the subject of this month's article. In July 1923 she had bought 2231 Divisadero Street, an Italianate Victorian built in 1877. Six years later, in April 1929, Morgan had the opportunity to buy the adjacent property to the south, at 2229 Divisadero, which had also been built in 1877 as part of the initial development of that block. Morgan combined the two buildings, taking the upper story off 2229 Divisadero to allow more light to 2231, which by then was being overshadowed by the six-story apartment building at 2233 Divisadero. She opened up the interior, moving the living area to the rear overlooking the garden. A garage was added and one set of stairs from the sidewalk now gives access to the combined property. The current owner bought the property in October 1957 from Morgan's estate and has retained its character and appearance.

Morgan enjoyed a career-long association with three generations of the Hearst family. Phoebe Apperson Hearst was a patron and an early client. Phoebe's son, William Randolph Hearst, commissioned Morgan for many residential and commercial projects, the most famous of which were his estates at San Simeon and Wyntoon, and W. R.'s son George had Julia convert his house in Hillsborough to a Western model of the White House. Morgan's work at San Simeon is well known and may be viewed first hand by visiting this State Historical Landmark.

Morgan closed her office in the Merchants Exchange Building in 1951 requesting that her files and blueprints be destroyed, on the grounds that her clients had their own copies. She would never have anticipated that 40 years later a lawsuit would develop as a result of the lack of documentation that she designed a particular house in Oakland. A suit was filed, however, and an initial summary judgment in favor of the sellers and agents was overturned at the Court of Appeal in 1994, significantly extending the State's real estate case law. Brokers are even more careful now than they were before in representing that 'famous' architects designed or remodeled properties they are marketing.