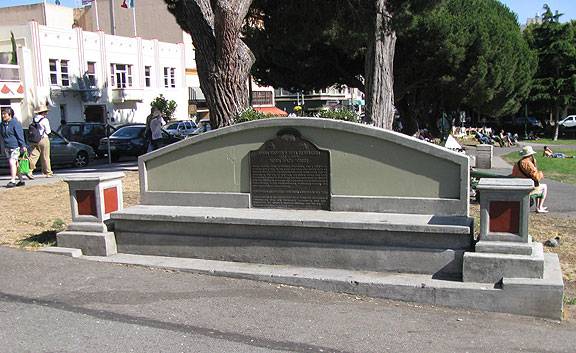 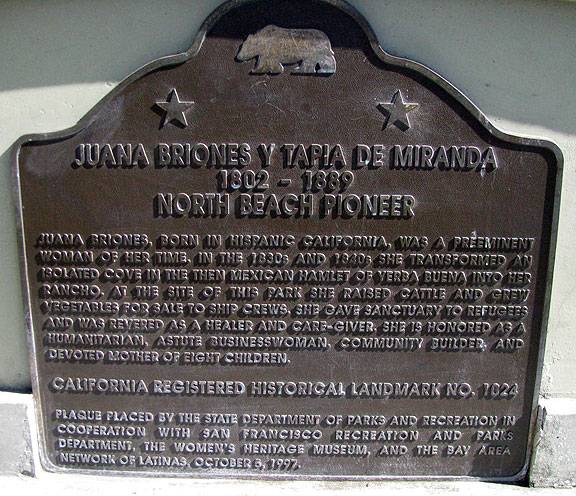 Juana Briones, in 1835, fled her abusive husband, and arrived with her seven children, to a little cove that would become North Beach. The first woman to settle in the rough village known as Yerba Buena, built her adobe house in 1836 on what is now the Northwest corner of Washington Square becoming one of the first three settlers of North Beach and one of the first women landowners of California. Briones established a ranchero in today's Square, raised cattle, sold produce to crews from the nearby trading ships and cared for her children. She was well known and respected for her astute business skills, her hospitality, courage, independence and generously applied healing skills. Several accounts comment on her kindness and humanitarian spirit for assisting sick and deserting sailors who often jumped ship because of the harsh working conditions they were forced to endure. Juana Briones lived about 40 years in San Francisco and then moved to what is now Palo Alto, where she lived for another 47 years. She died in 1889. 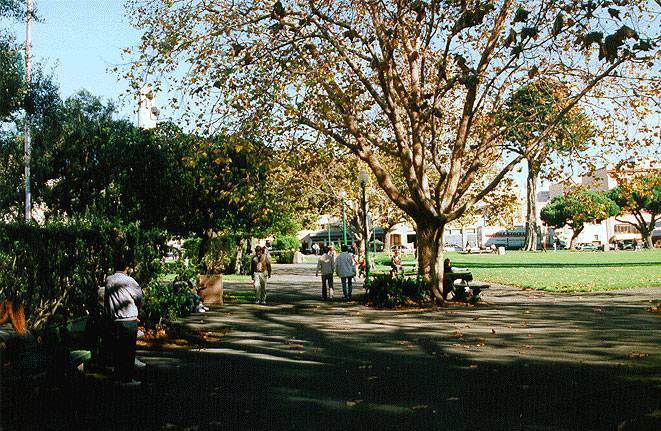 In July of 1989, the Women's Heritage proposed that a plaque be placed in Washington Square to commemorate Juana Briones. The State Historical Commission, at a time when less than 1 percent of California's historical landmarks honored women (and none in San Francisco did) did authorize the registering of a plague, contingent on the City Commission allowing them to place it in Washington Square. Surprisingly, despite Briones' history as a pioneer of North Beach, the Recreation and Park Commission denied the request. Almost immediately following this request community and political groups became involved to fight for the plaque. Diverse groups such as BANeLa (Bay Area Network of Latinas) and the San Francisco Historical Society supported the effort to honor Briones. This commemoration took on a significant political purpose, in light of the appalling lack of plaques dedicated to people of color. Briones would be the first Latina to receive such an honor. After nearly eight years of struggle, and 160 years after Briones made her home here, a plaque was placed in the square to honor Juana Briones in the Fall of 1997. Unfortunately, anonymous critics have taken to defacing it, perhaps because it is an ugly concrete slab, perhaps because they object to commemorating Juana Briones, no one knows at this writing.

The square contains several other monuments and statues, including that of Ben Franklin with a time capsule buried beneath it, the Victorian statue commissioned by Lily Hitchcock (patron of the famous Coit Tower) to commemorate San Francisco's volunteer firemen. East of the square is an Art Deco building with the colors of the Italian flag. On the northeast corner of Union and Stockton is the Dante building, that used to be filled with mostly Italian businesses.