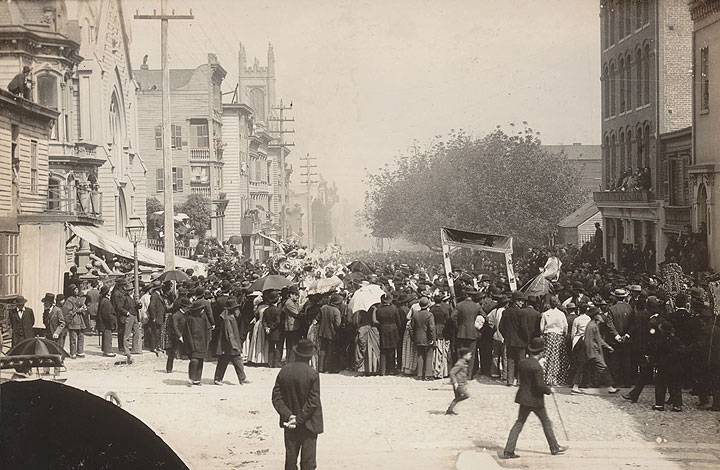 Joss houses—or Chinese temples—were, like restaurants, routine stops on the Chinatown tourist's itinerary. Joss houses were mentioned as early as 1860 as sites of potential interest for whites curious about Chinese religious practices. Almost forty years later, William Doxey informed readers of his guide that "to many visitors, the joss-houses of Chinatown are the most interesting sights this oriental section of an occidental city includes." "The word joss," he went on to explain, "is a corruption of the Portuguese word deos (God); hence, idol." E.G.H. was interested enough in Chinese religious practices to visit joss houses twice, once in the company of Chin Jun, and once with Mrs. Law. Writing in the early 1880s, Disturnell revealed there were a number of joss houses for a tourist like E.G.H. to choose from and explore. "One of the largest and most expensively fitted up," he explained, is the Kong Chow, 512 Pine Street… Other gorgeously fitted up temples are the Hop Wo, 751 Clay Street; Ning Yang, 230 Montgomery Avenue; Yeong Wo, 730 Sacramento Street; Yan Wo, St. Louis Alley; Tong Wah Meu, Jackson Street near Stockton; and two, the Sam Yup and Tin How Meu, on Waverly Place between Clay and Washington Streets." (35) 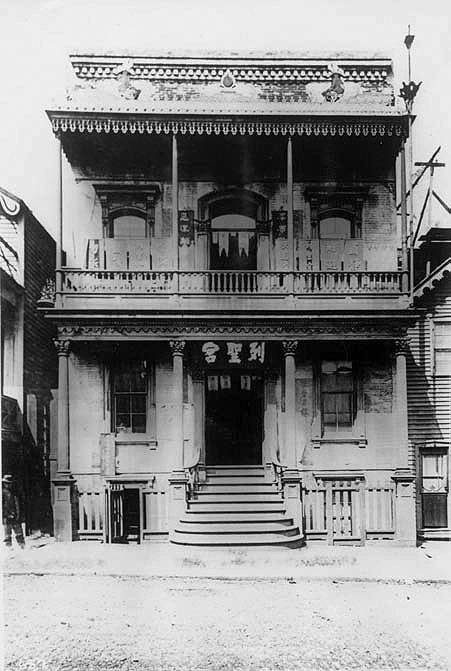 As white visitors encountered these places of worship, they fixated upon several components of Chinese religious practices as potent registers of the social, and sometimes racial, differences between whites and Chinese—frequently drawing stark contrasts between what they saw as civilized, Euro­American Christianity and the barbarous heathenism of the Chinese. This often began with descriptions of the interior spaces of Chinese places of worship that stressed the ways in which, in the words of Mabel Craft, joss houses were "superb in a garish way but to the last degree unchurchly according to occidental standards." Some of tourist literature's favorite words for describing what was found in the interiors of joss houses were "dingy," "grotesque," and "hideous." "They were all much alike," explained Iza Duffus Hardy, "dingy carpetless apartments up one or more flights of stairs." A. E. Browne, visiting San Francisco on a trip "across the Continent" with a Raymond and Whitcomb Party, recorded in her travel journal that while the shrines and altars were "ornamented by some very beautiful teak wood carvings… the images were unlike anything in human form and were grotesque and horrible." In an article he contributed to the Overland Monthly, D. E. Kessler described seeing "the looming figures of three mighty 'gods,' bizarre and bedizened with stiff brocades, their hideously carved, expressionless heads vaguely dim in the upper murky shadows."(36) 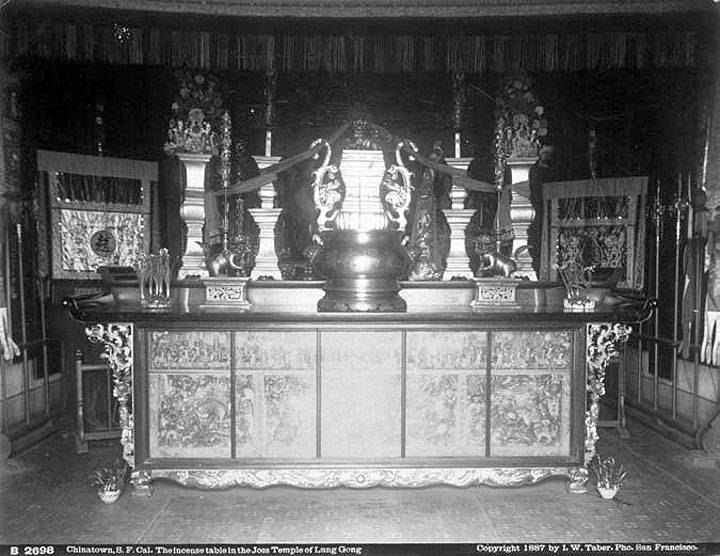 The incense table in the Joss Temple of Lung Gong, 1887. Tourist literature generally displayed a lack of understanding of Chinese religious practices, characterizing them as barbarous heathenism.

The contrasts drawn between Chinese and Christian religion did not stop with observations about the differences in places of worship. Specific religious practices and tendencies also came under scrutiny. What was viewed as the stereotypically pervasive greed and venality of the Chinese that sullied their religion was seen as especially egregious. When a writer for Cornhill Magazine explained to his readers that "pious" Chinese were "expected, at certain periods, to feed 'Joss' by liberal offerings of food and drink," he also noted, conveniently overlooking the prevalence of the Christian collection plate, that these "of course, ultimately go to the priests." This writer further related that when he asked why the drinks were sold in glasses that held "little more than a thimbleful" this question elicited "the truly Confucian reply, 'Fillee often, payee often."' J. W. Ames informed his readers that he had a hard time discerning whether the man he encountered in a joss house was "priest or proprietor." Although he was aware that the priests supported themselves and their establishments through the sale of votive candles, incense, and other articles required by worshippers, he declared that from what he saw he believed the religion of the Chinese was "simply a mercantile venture throughout."(37)

Within this formulation of the corruption of Chinese religious virtue by pecuniary impulses, the irony of the fact that it was the white tourists who were some of the liveliest participants in the commerce that took place in joss houses seemed lost on most observers. Even when it was not, however, the Chinese—not the tourists—bore the brunt of the criticism. The tourists might have been silly, but the Chinese—especially the priests—were represented as dangerously dishonest. J. W Ames, so thoroughly convinced of the commercial nature of Chinese religion, told his readers that "if you like, barbarian as you are, you may purchase the whole establishment, idols, giants, screens, sacred bells and all"—the "shrewd old priestly fraud will gladly sell if you only offer enough." D. E. Kessler disclosed that to tourists—especially a "giggling coterie of ladies accompanied by an official white guide—joss sticks will be sold, prayers will be made for certain dollars, 'good luck' fetishes may be secured, [and] the future will be divulged… by the crafty, repellent priests in charge." While Kessler, like Ames, reserved greater criticism of the inclinations of the priests than the tourists, both also tapped into an undercurrent of hostility that they believed ran through these encounters. Ames referred to white tourists as "barbarians"—the term whites often used to refer to the way they believed the Chinese saw them. Kessler represented the Chinese priests as "the oily despisers of 'white devils'" who separated "the foreigner and his dollars" with "an inward glee and an outward subservience."(38)

Another feature of Chinese religious practices that seemed to really grab the attention of white observers was the fact that the Chinese had no clearly demarcated times for worship. As Mabel Craft explained to her readers, "no bell is rung, at no stated hour do the eyes of the worshippers turn toward a shrine. No congregation gathers for united praise and prayer, or sits to listen to an exposition of doctrine or duty." San Francisco resident, writer, and historian John S. Hittell described for readers of his guidebook what he called the "remarkable lack of reverence and formality" that characterized "the Chinese mode of worship." "They enter the temple as they would enter a lodging-house," he explained, "chatting and smoking, and with covered head." "Without uncovering, or ceasing their conversation," he continued, "they approach their favorite deity, go through the 'chin-chinning process' (bowing three times)…leave their offerings, … and go about their business without further ceremony."(39)

For Craft, Hittell, and many other observers, the meanings they took away from such religious practices—whether or not they truly understood what they were seeing—correlated directly to certain social and racial traits of the Chinese. "The religion of the Chinese is individualistic and intensely practical," Craft concluded, "like everything else about him."(40) Joseph Carey summed up the core thrust of white observations in joss houses when he wrote, "it is in religious services and ceremonies and beliefs that we get a true knowledge of a race or nation." According to his observations, the Chinese religion showed that the Chinese as a race were primitive, barbaric, and child­ like when compared with American Christians. To drive this point home, Carey described an encounter with a joss house attendant "who was selling small, slender incense sticks" and who told him that "you could burn them to drive away the devil" and that they also happened to be "good to keep moths away." "Doubtless in the Chinese mind," he then told his readers, "there is a connection between moths and evil spirits." But, he explained, such "puerilities" belonged "to the childhood of the world and not to the beginning of the twentieth century."(41)

For men like Carey who had a special interest in spreading Christianity among the Chinese—he was a Doctor of Divinity—and others who worked directly among the Chinese and had made conversion their mission, the very existence of joss houses was a constant reminder that the missionaries' efforts had been largely unsuccessful and served as yet another sign of the supposed unassimilability of the Chinese to American ways. Chin Jun's reply to E.G.H. when she asked if he was a Christian-thinking perhaps that his reticence in answering her questions about Chinese religious practices had to do with the fact that he no longer performed them—was telling. Chin Jun "had been one for a month, but then gave it up." The reluctance of Chinese to convert to Christianity seems to have bred a certain amount of anxiety about reverse­ conversions—in which Christian places and sometimes people were converted to Chinese ways. Some writers—in a strange twist on emergent yellow peril logic that conjured up images of the growing threat to the nation posed by ever-expanding numbers of Chinese immigrants—went so far as to express their fears that the strange religious practices of the Chinese would actually degrade the progress of Christianity or even worse, Christian civilization itself. G. B. Densmore related his dismay—and what was nonetheless a patently false claim—that "where we have converted one Chinaman to Christianity, their influence has degraded ten white men to practical heathenism." Similarly, Reverend Otis Gibson, who actually did missionary work among the Chinese in San Francisco, decried the fact that "the Chinese have opened their heathen temples, and set up their heathen idols and altars in this Christian land; and instead of our converting their temples into Christian churches, they have absolutely changed one of the first Protestant churches of this city into a habitation for the heathen."(42) 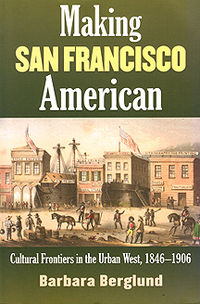