It's an Oily World Out There 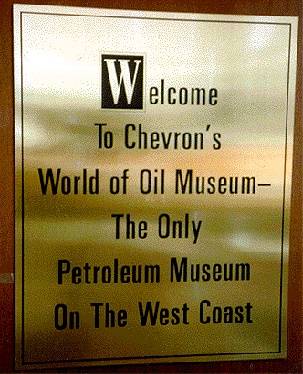 World of Oil Exhibit, Chevron Building, 555 Market Street between First and Second. This display of oil company propaganda will be a whole lot more entertaining if you do your conspiracy homework before you go. According to legal records from the 1940s prosecution, the oil companies, along with the auto-makers, conspired to destroy public transit in Los Angeles by buying up the streetcar lines and having them torn up and sold for scrap.

The oil industry may have had a hand in setting up Saddam Hussein for Desert Storm? George Bush encouraged his Kuwaiti oil-sheik buddies to steal massive amounts of oil from Iraq's underground reserves. Then Bush had the State Department and C.I.A. assure Saddam that the U.S. would wink and look the other way if Iraq invaded Kuwait. Why? Big oil wanted a war -- a perfect excuse to create a massive, permanent U.S. military presence in the Mideast, thereby securing the majority of the world's oil reserves for Conoco, Amoco, Phillips, Chevron and company.

And guess who owns the Somali oil fields? That's right: Conoco, Amoco, Chevron, and Phillips have exclusive concessions to two-thirds of future Somali gas and oil discoveries. Conoco's headquarters in Somalia became the de facto U.S. embassy after the U.S. invaded that country.