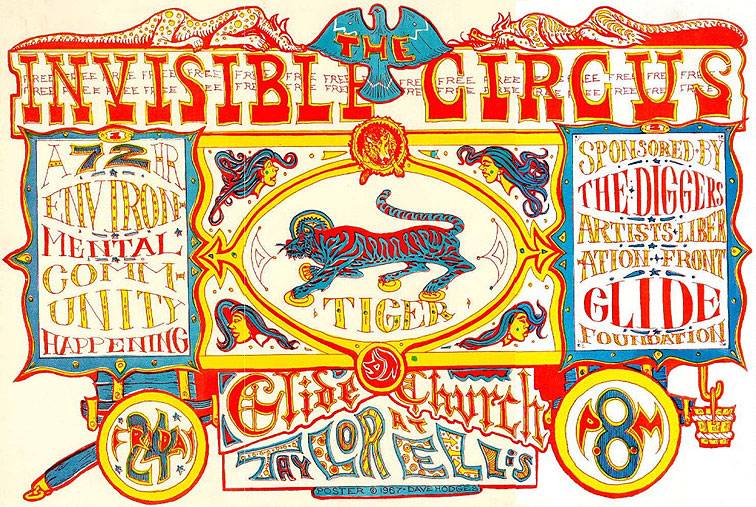 The Invisible Circus was San Francisco's digger underground answer to the Trips Festival that had happened the previous year. The Diggers staged this happening at Glide Church, where the Artists Liberation Front had held one of the first Free Fairs the previous fall.

Originally advertised as a "72 hour environmental community happening," the event started Friday night and finally dissolved into the dawn's breaking light on Sunday morning. Nevertheless, the stories about those 36-plus hours became legend in San Francisco's hip community for years.

Chester Anderson and Claude Hayward brought the Gestetner equipment that constituted the free printing presses of the Communication Company, and set up shop in one of the church offices. From there, they issued bulletins and news flashes every few minutes. The resulting body of printed sheets comprises an instant archive of the event, of the free space created within the walls of this liberated Tenderloin neighborhood sanctuary. 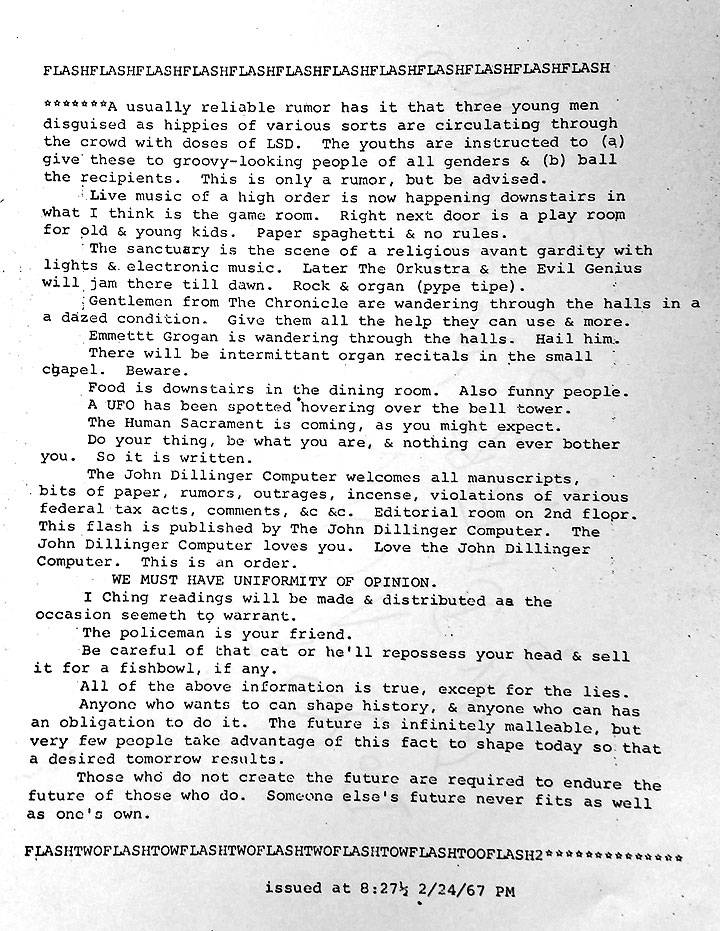 One of the many printed communiques that emerged from the Communication Company during the Invisible Circus.

Chester was fond of telling about one such sheet, a story which typifies the spontaneous nature of a digger event. He had taken a breather and went for a drink to a bar across the street from Glide. There he overheard a heated discussion between two of the bar's patrons. Chester, the ever-vigilant correspondent, whipped out his notepad and jotted notes of this conversation. He then repaired to the Communication Company temporary facilities and typed up his notes, ran off a few copies of this instant news bulletin, ran back across the street and astounded these very patrons with copies of their conversation memorialized in print.

Meanwhile, every cubicle of Glide was happening. The elevator to the basement opened to a hallway filled with styrofoam. Wading through this fill was like a dream sequence of being stuck in place while trying mightily to move. In another room, there was a panel discussion on pornography. When it came time for the police vice squad officer to speak, one of the diggers opened up a glass display case from its hidden access panel in the next room, and laid his penis on the shelf. The audience broke apart in hilarity over the irony of these two juxtaposed images, the staid cop discussing in a quite serious tone the dangers of porn, while the anonymous flasher performed his silent interpretation of "do your own thing" behind the podium. The cop never caught on.

Original Digger Kent Minault describes the sequence of events from the Digger provocation at the outset of the Human Be-In, to the founding of the Artists Liberation Front, to the amazing and Fellini-esque events at the Invisible Circus.