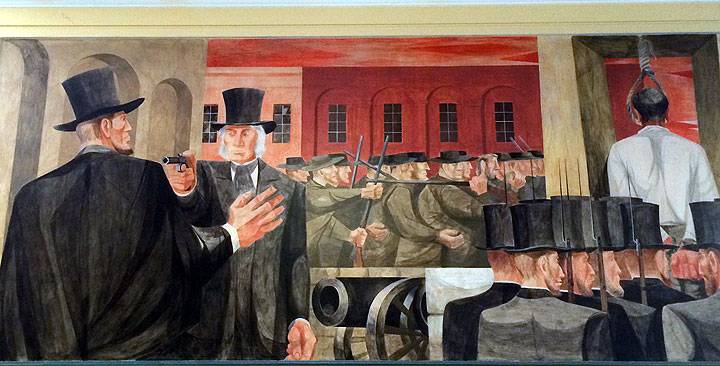 1850s political culture was based on honor and virtue, and when a gentleman felt his honor challenged, it called for a duel to settle matters.

Murals in public buildings provided the artists with the most natural medium for expressing their American Scene/New Deal ideas. The new art was not only to be by and about Americans but also for Americans, and both artists and administrators agreed that art should be democratically accessible to the people rather than restricted to the salons of the rich.(16) Most artists seem to have viewed wall painting as an interesting and legitimate alternative to easel work, particularly because murals were a way of returning to the public the art that it was financing. Artists rarely attributed any great philosophical implications to the mural programs, but accepted them as projects that would enliven public places with art which reflected the spirit of the sponsors, the artists, and the viewers. Unlike their East Coast colleagues who unsuccessfully plumped for a permanent federal art program, most Californians appear to have accepted the projects as temporary. Only two project officials, Joseph Danysh in Northern California and Stanton Macdonald Wright in Southern California, supported the position of Los Angeles Times critic Arthur Millier who denounced the private market as an "interpretation of individualism which conceived of society primarily as an arena of commercial exploitation."(17) Danysh criticized easel paintings as created by the isolated artist in his traditional attic and purchased, if at all, by a wealthy collector to be hoarded as an investment,"(18) and Macdonald Wright eagerly welcomed "a picture that, due to the new social consciousness, is not a collector's item, but one that harks back to a day in which decoration was publicly displayed on walls and thus became the property of all who were able to benefit by its inspiration."(19)

Little historical precedent existed for the upsurge of mural painting in the early thirties. America had no strong tradition of mural decoration in public buildings, and painters from the American Academy at Rome had dominated what little mural painting was done in the years prior to the New Deal. The School of Rome was academic, but according to one depression-era critic, it "the academy of a particularly strangulated, debased and flat archaiasticism--the dilution of models already diluted."(20) Unable to use the sectarian symbols of Christianity, academic muralists had attempted to replace them with symbols of civic virtue, but, observed the same critic, the images were "as devoid of real meaning as the ideas which they attempted to convey."(21) Reflecting this despair with American mural painting, Nelson Rockefeller and Lincoln Kirstein's catalog to a 1932 exhibition of mural designs at New York's Museum of Modem Art dismissed most existing American murals as unimportant and urged American artists to follow the lead of the Mexican muralists.(22)

Portrayal of the 1934 Maritime Strike, though historically inaccurate (no headlines screamed "Strike Won!" at end of strike!)

Nowhere was Kirstein's advice more closely followed than in California. The influence of the Mexican muralist Diego Rivera was particularly pronounced in the works of many of the state's artists. With David Alfaro Siqueiros and José Clemente Orozco, Rivera had revived the almost lost technique of fresco, or painting with watercolors on wet plaster, in his murals of the early 1920s, and the idea of painting on the walls of buildings soon attracted the attention of United States artists. Maxine Albro, Clifford Wight, Marion Simpson, Bernard Zakheim, and Victor Arnautoff, all prominent California New Deal muralists, had worked with Rivera either in Mexico or in California, where he executed several commissions.(23) Rivera's government-sponsored Mexican murals, his highly decorative style, and his use of themes relating to the common people provided an irresistible model for California artists seeking to develop their own folk-nationalist style.

The influence of the leftist Mexican painter on New Deal art in California has given it an unjustified reputation for political radicalism, however.(24) With few exceptions California artists accepted the body of Rivera's art and rejected its soul--its revolutionary message.(25) Despite occasional confrontations and the ever-present spirit of Rivera, New Deal art in California was overwhelmingly noncontroversial. Rather than painting Marxist sentiments into their murals, the New Deal artists expressed an indigenous cultural nationalism which emphasized the strengths of American society both in the past and in the present. It is one of the great ironies of the federal art projects that their painters affirmed traditional American values in the visual style of a Mexican Marxist.