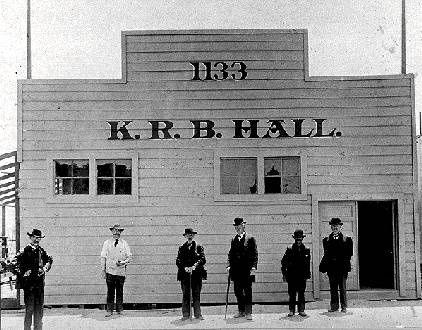 Irish immigration to the United States bloomed in the 1840s and 1850s due to the potato blight and economic depression in Ireland. Hundreds of thousands of Irish people left their homeland, and many came to California during the Gold Rush. Irish immigrants made up the majority of San Francisco's working class, constituting 13% of San Francisco's total population and over 21% of the labor force in 1870. By 1880, approximately one-third of the city's population was of Irish descent.

Their gradual ascent up the social ladder served as a model for later immigrant groups. When the Irish first arrived in San Francisco, German immigrants were the other major ethnic group. The Germans came with more resources and did better economically. The Irish immigrant community, however, soon became the prominent influence in city politics. This was due to several factors: because they were native English speakers; because they understood the U.S. political system (based on the British system they came from); and because of their sheer numbers. In 1867 San Francisco's mayor was an Irish Catholic, Frank McCoppin. The Irish political mobility was also aided by the fact that unlike the East Coast, California had much less entrenched bigotry against the Irish. The same was true for sentiments about Jews, and later, Eastern European immigrants. This provided more opportunities on the West Coast.

The Irish also used their ties and connections to gain power in the unions and subsequently exclude non-Irish workers. With the demise of the Gold Rush and the completion of the transcontinental railroad, both Irish and Chinese workers became unemployed. With competition for jobs greater, Irish-led unions stirred up resentment and discrimination against the Chinese, with Dennis Kearny, leader of the Workingman's Party of California, raising the cry of "The Chinese must go!"

The Catholic Church was vital to the Irish community. By the early 1900s, a full 75% of the Catholic clergy were Irish immigrants. Mission Dolores became a predominantly Irish church after 1906 with the Irish influx into the neighborhood.