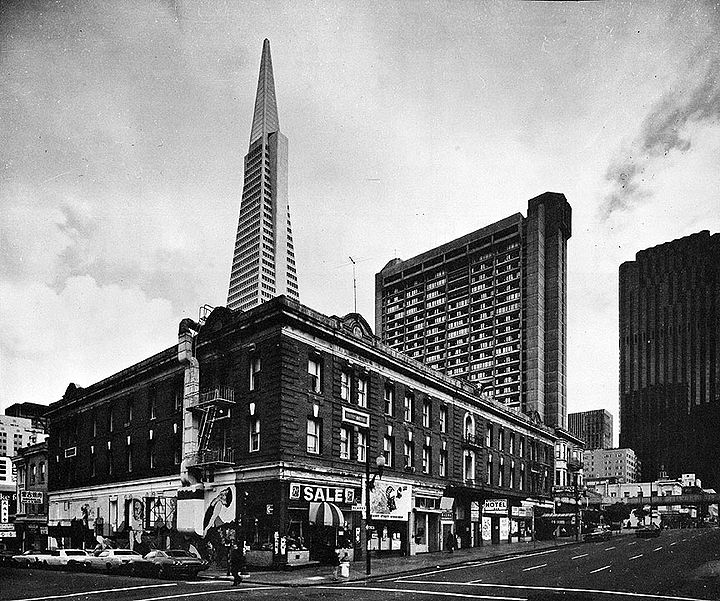 The International Hotel on Kearny Street was the last part of Manilatown. 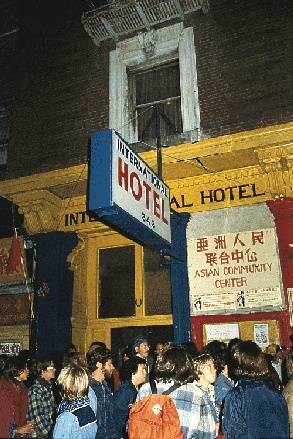 After battling eviction proceedings for over nine years, this community of manongs and poetry was brought to a violent end in the early morning hours of August 4, 1977. At around 4 a.m., over 300 riot-equipped police and sheriffs deputies cordoned off the surrounding streets, encircled the Hotel, and began their assault on 3000 community activists and protesters.

The police came down Kearny Street, with horses and police cars—"it was like the Roman legions," recalls De Guzman. The police did not go through the front door. Instead, they used extension ladders on fire trucks to climb up to the top floors and fight through a group of I-Hotel defenders. Sheriff Richard Hongisto, who had spent five days in jail for refusing to enforce the eviction court order, led the assault. Hongisto, who would run unsuccessfully for mayor in 1992, was featured in the pages of the San Francisco Chronicle and San Francisco Examiner using a sledge hammer to break down tenants' doors.

De Guzman, then the president of the International Hotel Tenants Association, described what happened: "Once the police and sheriffs got into the building, they broke into the tenants' rooms. Then they started breaking things up, stealing, taking what the manongs had, broke the toilets that way there were no toilet facilities, so the tenants could never return." The Examiner featured a photograph of De Guzman being dragged out by deputies in riot gear.

Meanwhile, in front of the hotel, over 2000 community activists and protesters had locked arms in a nonviolent attempt to prevent the police from entering the building. Shouting "We won't move!" I-Hotel defenders lined up nine rows deep as the police started their frontal assault. The police were brutalizing people outside in front of the hotel, said De Guzman. They would run their horses up front and hit people with their clubs. They just tore people up, hitting them on the head, and jabbing them with night-sticks.

Escorted by two I-Hotel activists, Felix Ayson, a 79-year-old Filipino who could no longer walk or hear, was one of the last people to leave the I-Hotel. As he left with the assistance of two hotel supporters, Ayson told an Examiner reporter: "I think my end is very near from this beautiful world."

The eviction of the International Hotel tenants made the national news, and cost the City over $3 million and a lot of bad publicity. The eviction outraged the nation. Concerned over the forced eviction of poor elderly citizens, Senator Frank Church of the Senate's Committee on Aging sent a delegation to investigate the incident.

Nearly 20 years after the forced eviction, the City of San Francisco, with the help of federal funding, will begin construction in the summer of 1997 of a $20 million, 15-story, 104-unit building. After years of continued advocacy by I-Hotel community activists, this New I-Hotel will provide affordable housing for senior citizens, newly arrived immigrants, and low-income San Franciscans. The proposed building will also have a Filipino Community Center, Museum and Exhibition Hall, and a four-story St. Mary's Chinese Elementary School.