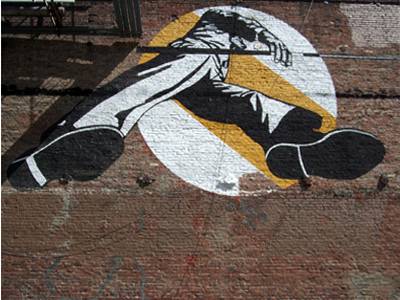 Though it has sat empty and forgotten for years now, the walls of 61 Golden Gate are still adorned with the signage of the late Hollywood Billiards. A peculiar perspective from beneath the feet of a giant, who, cue in hand, moves with a confident swagger, and stands forever; captured in the midst of a single , vast stride.

The building itself stands on a wedge of street where Golden Gate haphazardly intersects Market, just inside the gaping mouth of the Tenderloin. Sitting towards the narrow end of the wedge, the property faces out onto both streets. 61 Golden Gate was the entrance to the pool hall on the second floor, and 1046 market was the entrance to the strip club downstairs that shared the building.

This wasn’t no family billiards. (Family Billiards is out on Geary, anyway). 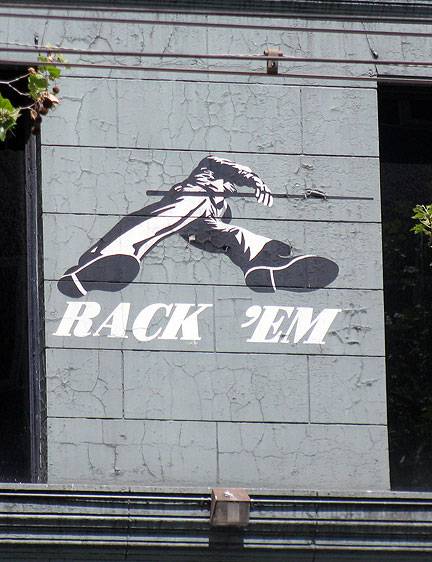 On a weekly basis, law enforcement tossed the place, and anyone who happened to be in there when it happened would be put up against the wall outside to be searched and humiliated in front of god and fellow criminal. Inside, the air was heavy with bad intentions. Shadows cast themselves across torn and tattered wallpaper, steadily creeping with the ominous silence of gathering dusk, lamenting their indelible presence there. Rust colored stains of various age told a story of violence in the dingy, mauve carpet, in this sink of iniquity, haunted by a darkness ever growing. It’s memories, distant echoes of anguish.

I loved this place.

It has been closed forever since the night of December 10th, 2003, when it died a violent death.

It was three of us on the table, and the night that would be the last for Hollywood Billiards seemed at first like any other. The music was bumpin', and the place was full, but not packed, the crowd consisting mostly of representatives for the local Asian gang, as it usually was at night. Nothing seemed odd, I didn’t smell trouble.

In fact, I thought, as I was chalking my cue and watching a couple of guys throw down the ro-sham-bo, (that’s rock scissors paper for those of you who didn’t grow up in the sunset), the atmosphere pretty relaxed for once! Almost.. jovial.

Suddenly doesn’t describe how things changed. Fuck, neurons don’t fire that fast! I had barely turned around to go back to my game, when those two started swingin'.(I couldn’t help but think “Damn! Rock beats face! Ooo!”) Fisticuffs in Hollywood Billiards was par for the course so we weren’t concerned til a few seconds later, when 10-15 people were goin' at it, an official brawl.

From there it just got worse. As we scrambled to get outta the way, I watched the situation escalate from people throwing punches to people throwing bar stools, and my pool cue, forgotten in my hand, was snatched and recruited for the war effort. It was then I remembered that earlier, I had given the counter man my ID, as deposit for the balls, and there was no way I was leaving without it.

It was pandemonium. Complete chaos. And as I‘m making my way to the counter, it gets worse. I hear from behind me, over the general din, this kree-azy kung-fu war cry that had no business coming out of anyone but Bruce fucking Lee. I couldn't not laugh. But when I turned and saw the ninja in question actually leap up onto a pool table, with a cue for a bo staff, and start wailing on people with the grace of chow-yun-fat, I had to take a moment to appreciate both his skill, and the absurdity of finding beauty in all of this.

I never heard the first shot fired, but I saw it hit the man not 5 feet in front of me. He went down hard, clutching the back of his leg, yelling, almost understated,

Now it is serious. There is gunfire. We will be shot. The police will be here, I am holding. I will go to jail. The counter guy still has my id, and one of my friend has disappeared. 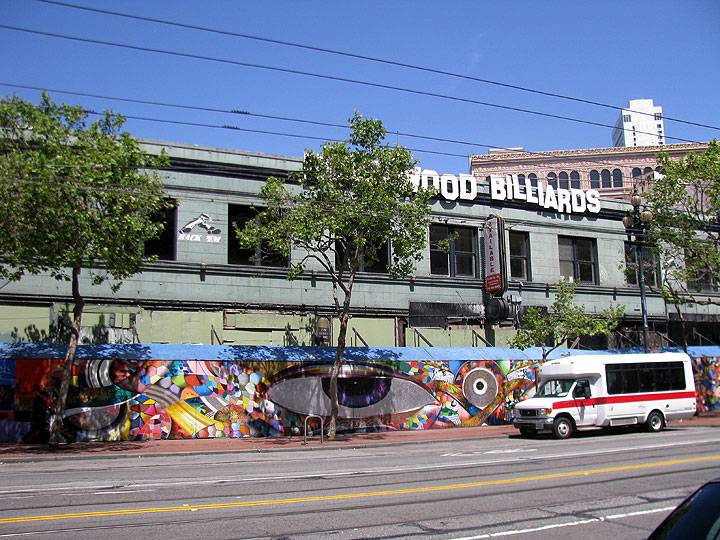 Hollywood Billiards on Market Street between Jones and Taylor, 2011.

And all of a sudden, I am calm. Zen. I interfere the counterman before he escapes, and he returns my ID.

“Game’s on the house,” he tells me. I run to catch my friend before he tries to get out through the back door, grabbing him by the scruff and telling him firmly

“NO! We are leaving together, through the front.”

And we do. Calmly, quietly, all three of us, walk right out the front door not 30 seconds before the police storm right in. We walk past the body of the man shot out front, and say nothing til we reach the car. We found out later that another victim was found dead in the room just behind the door through which my friend was trying to leave.

1 dead, 3 wounded. A violent end to a violent place. But It was a historical night for us, truly one of the better stories we have. The telling of which is always made better when presented along with our souvenir from that night. The 8 ball.

It was taken off one of the tables by my friend, to be used if needed as a weapon. It sits on my desk now, as I write this, for inspiration, and of course good luck. 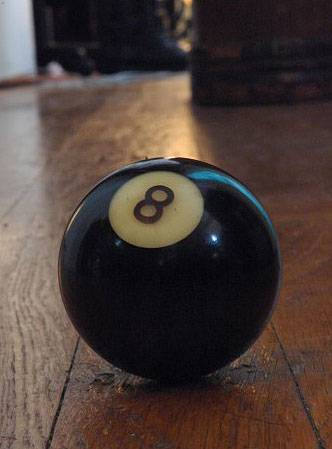