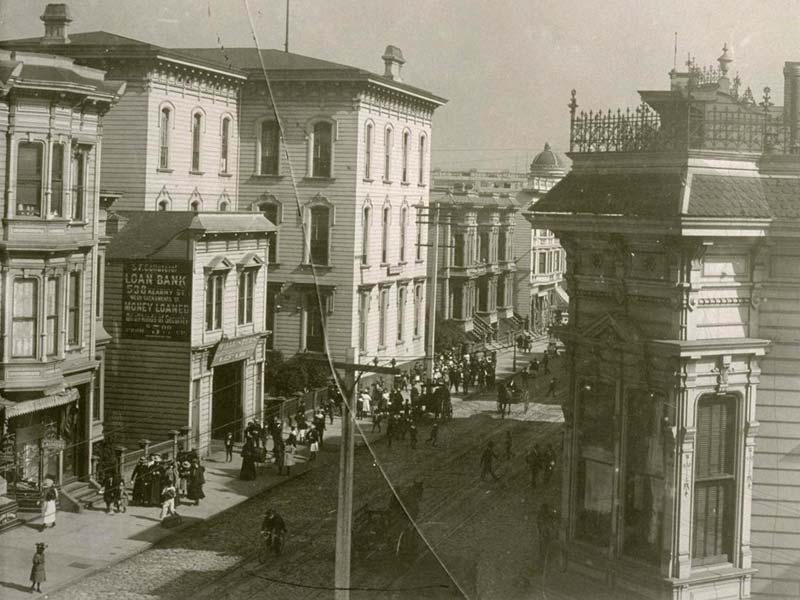 By 1909 a number of neighborhoods across San Francisco began holding large public events in an effort to bring the city together and remind its residents and the rest of the country that San Francisco was vibrantly back in business.

“Electricians having worked all night and the various committees up to the last minute, Hayes Valley is at last in readiness for the opening of its carnival this morning.” —San Francisco Chronicle, Wednesday, February 22, 1911

Here are some of the activities, events, and characters that made up the Hayes Valley Carnival. With the crack of a rifle, the four-day Hayes Valley Carnival began at 9:30 a.m. with the Pan-Pacific marathon foot race which started at the beach at Fulton Street featuring seventy runners, including the best amateur marathon runners from across the city. When the five and a half mile race ended at Hayes Street and Van Ness it had been won by Hayes Valley school boy John F. McKittrick, age 14 from the John Swett grammar school. McKittrick was awarded the Harvey I. Mulcrevy cup and hearty congratulations from Mayor P.H. McCarthy who greeted him at the finish line.

“Varicolored flags and pennants stretched across principle streets of the district and all along Hayes Street the buildings are decorated with bunting.” — San Francisco Call, Sunday, February 19, 1911

The carnival’s parade started at 10 a.m. February 22, 1911 at Van Ness Ave. and Oak Street, proceeding along Van Ness Ave to Golden Gate, to Fillmore to Sutter, and then a countermarch to Fulton, down to Laguna, over to Hayes and back to Van Ness. The parade through Hayes Valley consisted of float featuring the perspective King and Queen of the Carnival and the 300 children from local schools who had competed to be named George and Martha Washington. The procession was accompanied by a brass band and the native son's drum corps from across the city.

The parade was headed by the Grand Marshal followed closely by a platoon of mounted police and then the queen’s float in which Miss Rose Cohn the queen, was accompanied by her three ladies in waiting. The king’s’ float came next with King Henry Hock attended by his prime minister Rudolph Ulmer and three gentlemen in waiting and one court jester. The king’s float was followed by a carriage carrying grade schoolers Clarence Rayne and Evelyn O’Keeffe representing George and Martha Washington.

In addition to fire departments from around the city, the parade was rounded out by a large representation of drum and fife corps from local lodges of Eagles, Foresters of America, Native Sons, Molders’ Union, and Columbia Park Boys.

After the parade, the king and queen were driven to the Ocean Shore were an exhibition games between the Buffalo and Elcho Athletics, the former winning 7 to 2. The rest of the afternoon was taken up with a reception by the carnival’s royalty in the pavilion at Gough and Hayes Streets and visits to the carnival’s many attractions and sideshows.

The first evening was commemorated with Mayor McCarthy presiding over the coronation of the king and queen of the carnival preceded royal ball at the Hayes and Gough Street location with dancing and general gaiety ending in the early hours of the next morning.

The next three days were full of carnival attractions like live animal exhibits, a high-wire act, games, and a beautiful baby contest for the prettiest baby boy and girl, the thinnest baby, and a prize for the fattest baby. The baby contest was judged by people from North Beach, Mission, Noe Valley, Sunset, and Richmond. Prizes were supplied by Hayes Valley businesses. A concert by the Harmony Singing Society at the coronation at Hayes and Gough, a procession of specialty automobiles decorated for the occasion, vaudeville acts, and an evening Mardi-Gras at Laguna and Fulton Streets rounded out the four days range of activities.

According to the San Francisco Call, the motorcycle race that took place as a feature of the carnival was the first race to take place within the city limits of any major city in the country.

A Queen and King’s Raffle

To spur community involvement and to raise money to pay for the carnival’s costs a raffle was put in place to choose king and queen of the carnival. There was also a raffle for the school children who were competing to be George and Martha Washington. No record of how much a raffle ticket cost but by December 1910 42,000 tickets had already been sold. By the end of the raffle over 100,000 tickets had been sold. On February 18, 1911, when the votes were tallied Alberta Kragen and Clarence Rayne were named George and Martha Washington. Firemen Henry Hock and amateur opera singer Rose Cohn were crowned king and queen of the carnival, not without some difficulty for Miss Cohn.

The four days of the carnival ended with a masked ball under the pavilion at Hayes and Gough Streets erected for the crowning of the king and queen]. The king and queen’s reign was formally ended as were the fours of the day carnival.

War Clouds Over The Queen

Though Rose Cohn had been declared the winner her nearest competitor Rose O’Brien, hired a lawyer to contest her Cohen’s victory. O’Brien claimed that Cohen was not a resident of Hayes Valley and thereby didn’t deserve the honor. In an effort to make peace, the carnival committee offered O’Brien a small float of her own to be accompanied by an escort of five pages and an elaborate wardrobe. Their offers fell on deaf ears. A court threw the lawsuit out and Rose Cohen was crowned.

In the carnival’s aftermath, a few interesting things happened to some of the participants. About a year and a half after he was crowned king of the carnival 27-year-old firemen Henry Hock was kicked in the groin while currying one of the fire department’s horses. He recovered fully.

The Man Who Would Be King

One of the most extraordinary developments reported during and after the carnival involved Hock’s Prime Ministers, Rudolph Ulmer. Ulmer, a wholesale liquor distributor at 497 Hayes Street had competed to become king of the carnival but his wife Mary Ulmer was not having any of it. In public statements, she made it clear that “No husband of mine will parade the streets like a clown, besides our house needs new furniture and carpets.” To ensure that Mr. Ulmer would not succeed in becoming king Mary Ulmer set about a course of buying 1,000 raffle tickets for his closest competitor to ensure that her husband would be denied the crown. Mrs. Ulmers said that while it was true that she bought 1,000 tickets for her husband’s opponent he still lost by 17,000 votes so how was the loss her fault?”

Mr. Ulmer filed for divorce almost immediately but according to the San Francisco Call, 1912 the judge in the divorce case refused to grant the Ulmers a divorce, his reason were not disclosed. In the fact, it took another court ruling and, a different judge before Ulmer were finally granted a divorce with Mrs. Mary Ulmer moving to Vallejo.

Other than a note about the divorce of the Ulmer’s all other details about the Hayes Valley Carnival seem to fade into history. Perhaps the breadth of international attention for the Pan American Exposition of 1914 made these sorts of carnivals in Hayes Valley unnecessary.