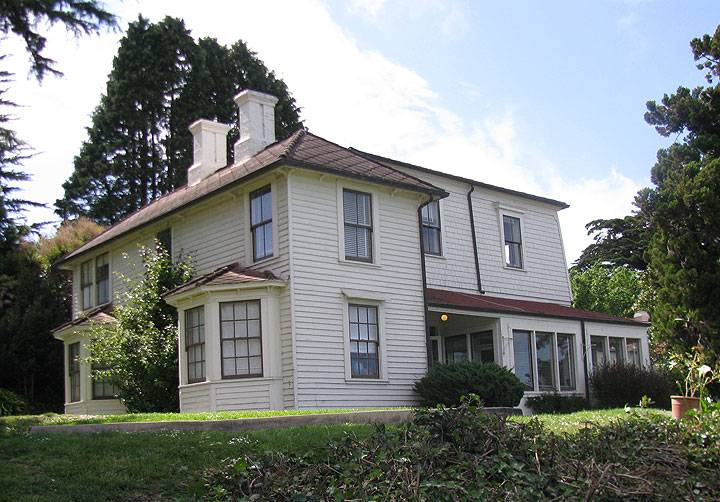 The Haskell House (Fort Mason Quarters Three), at the foot of Franklin Street. The historic Haskell House, which dates back to the 1850's, has hosted a succession of military men since it was confiscated by the Union army in 1863 and turned into officers' quarters. (The Haskell family wasn't entirely happy about the terms of confiscation; Leonidas Haskell, a major on General Fremont's staff during the Civil War, kept unsuccessfully suing to get it back until his death on January 15th, 1873.) 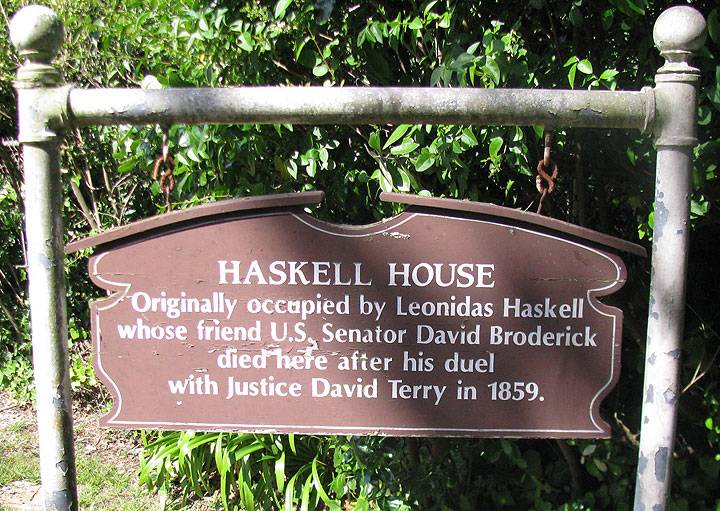 Over the years, the house has developed the reputation of being haunted. Colonel Cecil Puckett, who lived there during the late 1970's, said "I feel that something or someone follows me about the house at times ... I even feel that it watches me in the shower." (Could the ghost be gay? Don't ask, don't tell!) Capt. Jim Knight (ret.), MTMC Western Area deputy commander who spent two years in Haskell House, when asked if the house was haunted, said "There's no doubt about it. We didn't see or hear anything, but sometimes we'd be in the kitchen and the lights in the dining room would go on by themselves. Or we'd be downstairs and the john in the bathroom upstairs would flush by itself."

The next tenant, Capt. Everett Jones (ret.), didn't believe in ghosts -- at first. "After we moved in we had a couple of parties there and we joked about a ghost being in the house. One Saturday morning after a party, I was in the kitchen putting things away and heard a big crash. Upon investigating, I found that a picture with a picture hook and a nail an inch-and-a-half long had crashed to the floor. It didn't look like the nail had pulled out; it looked like someone had pushed it from behind.

"There was a similar incident later when five pictures fell off the same wall. And my daughter was sitting on her bed one morning and one of those bolt-on light fixtures fell off without warning ... That all happened in the first six months after we moved in -- we stopped joking about the ghost after that."

Since then, the weird goings-on have continued. A painter working on the windows was actually pushed out a window by an unseen force. Plants have tipped over by themselves. Shadows have moved across empty rooms. Ghost hunter Sylvia Brown says she has "seen" a whole mosaic of spirits flitting about the house. The first, she said, was a man in a long black coat with a top hat who paced back and forth; then she saw a group of ghosts of frightened, disoriented black people cowering in the cellar.

The ghost in the top hat could be Haskell, pacing around trying to figure out how to get his house back from the U.S. military. (With the end of the Cold War, he may finally have a ghost of a chance.) But some say the truth is even more bizarre: The hatted ghost is the shade of U.S. Senator David C. Broderick, and the black ghosts in the cellar were underground railway passengers hidden by Haskell and Broderick.

In the 1850's, California was torn between pro- and anti-slavery forces. The result was a tight stand-off: Though nominally a free state, California had the toughest laws against blacks outside of the South. Just after winning statehood, California lawmakers decreed that any black person in the state could be brought before a magistrate and claimed as a fugitive. In the ensuing proceedings, the victim was not allowed to testify, and so the magistrate would inevitably hand over a certificate of ownership to the captor. It was a de facto "open season" on black people, even those who were not escaped slaves. Many sympathetic whites were reluctant to help, since a fine of five hundred dollars and two months imprisonment awaited anyone who gave assistance to a fugitive slave.

Senator Broderick, like his close friend Leonides K. Haskell, was an outspoken opponent of slavery. (Broderick and Haskell may also have collaborated in helping runaway slaves.) As Broderick was the most powerful political honcho in San Francisco, his anti-slavery diatribes did not endear him to the powerful pro-slavery faction in California government.

It was in Haskell's home that Broderick received a challenge to fight a duel with rabid pro-slavery activist David S. Terry, a transplanted Southerner and Justice on the State Supreme Court. Broderick and Haskell spent most of the next six days together, Haskell trying to talk Broderick out of the duel, Broderick insisting on going through with it. Haskell felt that Broderick's ill health disqualified him from dueling. The night before the duel, Haskell later reported, Broderick stayed up all night at the Haskell house, lying on the floor, drinking coffee, and talking in a profoundly disturbed manner.

After he was killed in the duel, Broderick's death made him an anti-slavery martyr, and the "free-state" forces rallied to lynch Terry and take permanent control of the reins of power in San Francisco. By the outbreak of the Civil War, California was solidly in the Union camp, thanks partly to the "heroic" death of Senator Broderick.

Does Broderick's spirit linger on -- literally -- at Haskell House? If you lurk about the grounds at midnight, don't be surprised to see a ghostly figure in a top hat pacing through the walls. 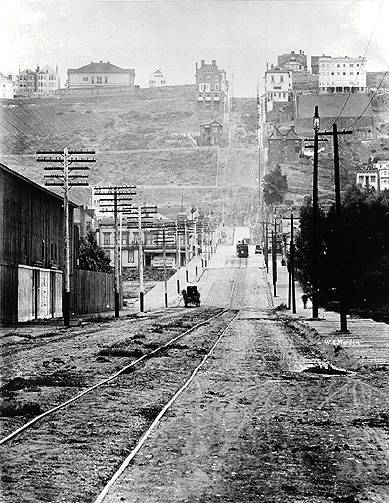 Looking southward at Pacific Heights, this is Baker Street about 1895.