by Jack Wood and Bill Simpich

Originally published in It's About Times, the Abalone Alliance newspaper, April 1982, under the title "Dropping In On The Nuclear Corporadoes"

San Francisco's financial district received unwanted exposure of many of its investment portfolios on March 22. Antinukers escorted tourists through the corporate jungleland, disrupting business as usual.

Wells Fargo's law firm, Brobeck, Phleger and Harrison, left their offices at 11 am, apparently fearing an invasion by protesters. Merrill Lynch's office, usually at its busiest between noon and 1 pm, locked its doors. Westinghouse and GE sealed off their offices, the DOE set its sixth floor elevator button on override and the Embarcadero Center hired fifty extra security guards for the day. 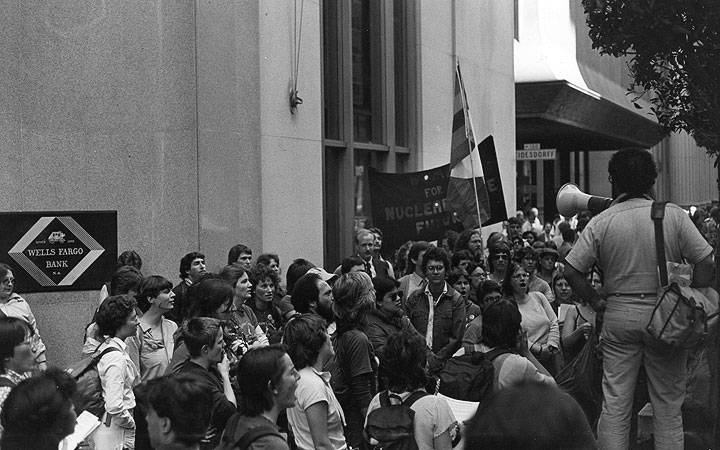 Of the 52 members of the Hall of Shame that were visited, eleven of them were chosen by affinity groups and organizations as targets for direct action. The winners were: Wells Fargo (by a wide margin--they are among the top five shareholders in 32 of the 36 biggest corporations involved in nuclear technology), the Department of Energy, Kerr-McGee, GE, Utah International (a subsidiary of GE), Bank of America, Westinghouse, DuPont, Union Carbide, Bechtel and PG&E. Virtually all of these institutions received visits, both inside and outside their four walls, from activists, many of them bearing tailor-made leaflets. To the runners-up: Better luck next time!

There were four arrests during the action. Three of these occurred when activists met with a Union Carbide vice-president in his office and decided to stay and put in some overtime. "Myth California" brought the total to four when she took her nuclear-powered appliances to the PG&E Visitor's Center and attempted to locate an electrical outlet in the lobby. All four were charged with the infraction of "refusing to leave a business when asked" (rather than the misdemeanor of trespassing) and spent the night in jail.

The police took no chances on this action. Channel 9 (KQED) reported that the police had snipers on some rooftops, as well as officers on horseback and motorcycles. The bomb squad, the hostage squad and backup units were also on hand. The extensive preparations made for the arrestees were sorely underutilized.

The police were not visible during most of the tour. They beat an abrupt retreat after an encounter with the first group of tourists, school children on an official outing. When the kids came upon a large contingent of blue-uniformed public servants, one young tourist asked them, "What are you doing here?" 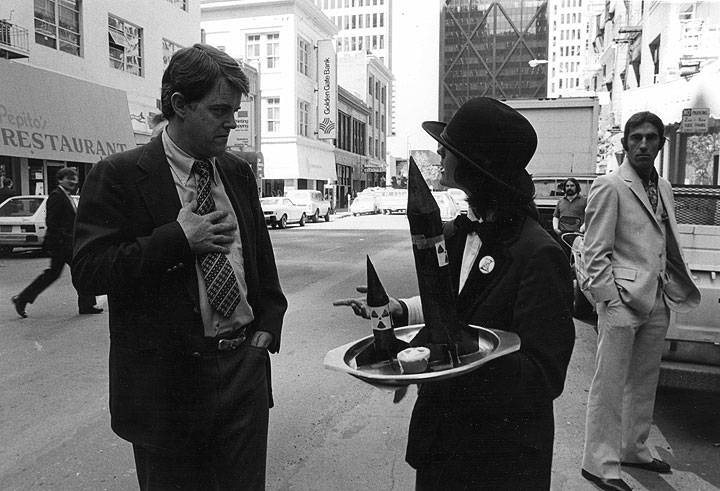 Waitress trying to find out who ordered the missiles in downtown San Francisco, April 1982.

Throughout one part of the tour, two waitresses with platters full of fresh nuclear weapons searched in vain for whoever in the world ordered these things. Although no one claimed the delicacies, they were all informed that they were paying for it anyway.

Of all the stationary tour guides, perhaps the funniest was the member of Love and Rage affinity group doing the rap on DuPont. He worked the crowd without a megaphone, like a Wobbly ranting and raving from a soapbox. He prefaced his remarks about their plutonium reprocessing plant on the Savannah River with, "Behind every great fortune lies a crime!" and followed with a brief presentation on the sovereign state of Delaware.

The organizers felt that two major goals were met. One was illustrating the tight web of concentrated control within the nuclear industry, and that the multinational corporations and the government are equally to blame. Another was demonstrating the connection between the nuclear weapons and energy issues.

The action also proved the antinuclear movement can effectively act in the heart of the city as well as in the depths of the woods of Diablo Canyon. But much greater work must go into outreach to ensure more diversity in the composition of the participants. The countercultural trappings of the antinuclear movement can stifle as well as enhance creativity of expression.

Special thanks must go to Bechtel and PG&E for their timely announcement the day of the action that Bechtel will take over management of the Diablo Canyon plant. It underscored why Bechtel got as much attention during the action as PG&E.

There is great interest in the Hall of Shame becoming an annual event: Maybe next year the action can include a focus on funding human needs as well as exposing corporate crime. Also, new questions keep popping up. For example, who is the landscape architect for the MX missile? 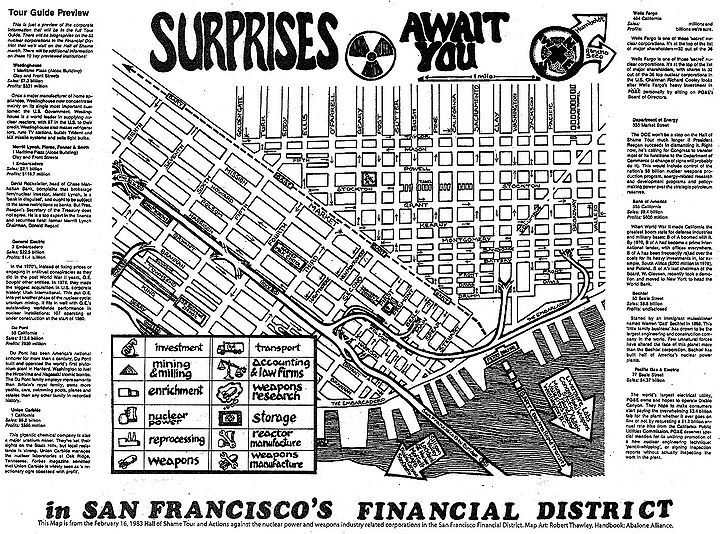 A map and guide to the Hall of Shame Tour the following year, 1983.