Originally published July 12, 2020, by the Western Neighborhoods Project at OpenSFHistory.org 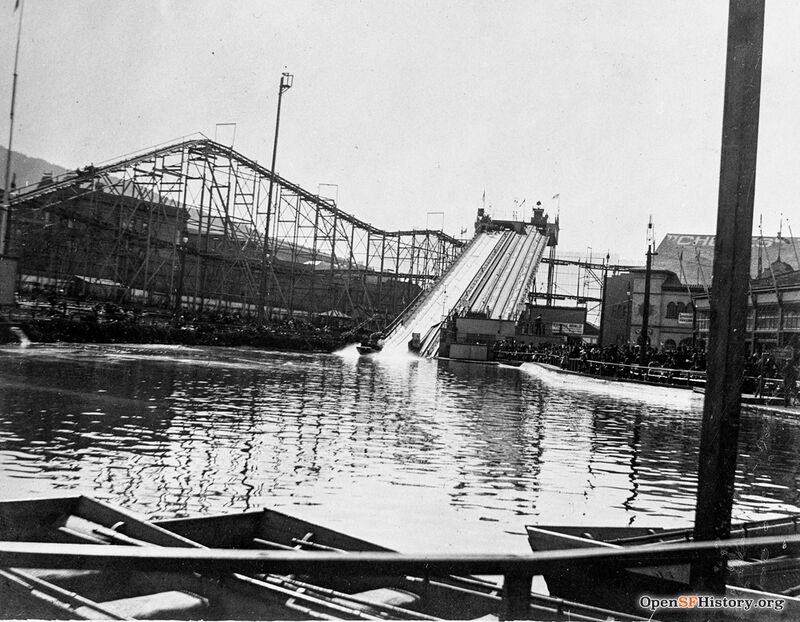 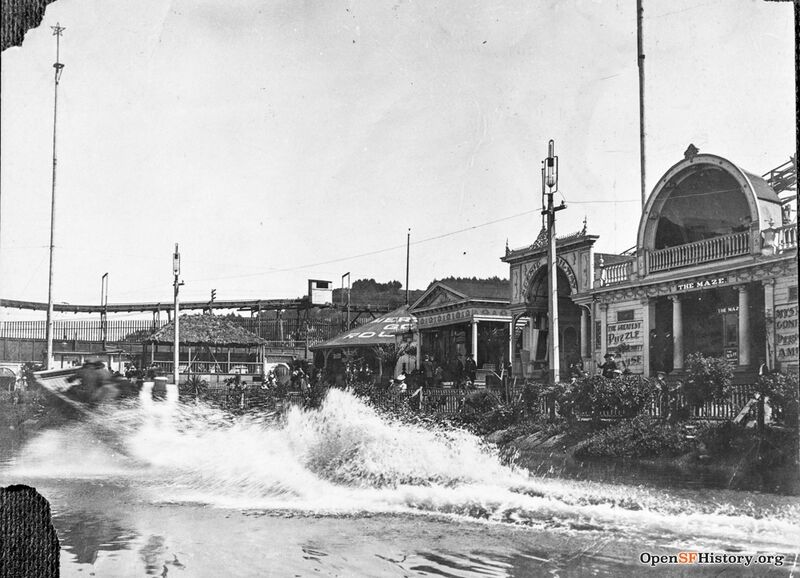 Haight Chutes crashing into the water, scenic railroad in background.

With summer upon us, thoughts turn to spending time in or on water, be it swimming pools, lakes, the Bay, or the ocean. 125 years ago though, fun on the water for San Franciscans meant heading to the Haight Street Chutes. The Chutes was an amusement park that included a water ride that may seem fairly tame now. Passengers were loaded on a boat at the top of a ramp, then the boat slid down the ramp into a small man-made lake.

The Chutes were created by Paul Boyton in Chicago in 1894, called Paul Boyton’s Water Chutes. A year later, he opened Sea Lion Park on the southwestern end of New York’s Long Island, which was a precursor to today’s Coney Island. Boyton started licensing his Chutes ride and San Francisco quickly got on board.

“Shoot the Chutes” opened on November 2, 1895. It was located on Haight Street, naturally, a couple of blocks east of Golden Gate Park, bounded by Haight, Cole, Waller, and Clayton Streets. This land was owned by the estate of John Baird, who had been the president of the California Powder Works, one of several dynamite factories in the Sunset District. Baird had died in 1880 and his estate was held in trust until his youngest child turned 21.(1) Therefore, the trustees in August 1895 entered into a lease with the Paul Boyton Chute Company which, in turn, assigned the lease to the Market Street Railway Company, which was then owned by Southern Pacific.(2) 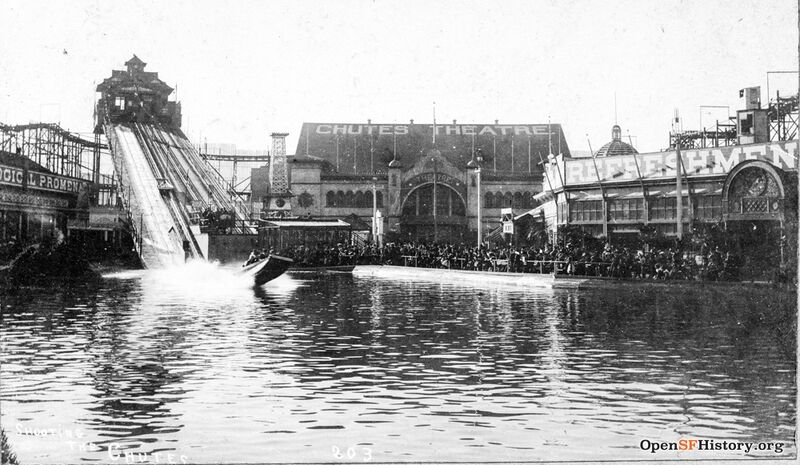 While Southern Pacific had the lease for the property, it was their attorney, Charles Ackerman, who owned and operated the “Shoot the Chutes.” At the time it opened, it was just the chutes ride and a food concession there. Opening day saw throngs of people packing the boats at the top of a tower to take the 300-foot long ride down to the pool below.(3) The 70-foot high tower had two tracks with carts to take people to the top, where boats were being launched every fifteen seconds. When the boats hit the bottom of the chute, the front end often shot up and sometimes even flipped over. It was all considered the fun of the ride.

A merry-go-round was constructed at the Chutes fairly early on, but the following summer, Ackerman began adding other attractions. Most prominent was the construction of the Scenic Railway, an train ride around the perimeter of the grounds. The Scenic Railway had some attributes of a roller coaster with dips and climbs, but mostly was a nearly mile-long ride around the park on elevated and lower tracks that ended in an 800-foot tunnel that had a lighted diorama of foreign lands inside.(4) For safety reasons, only one 6-passenger train was allowed on the track at a time. 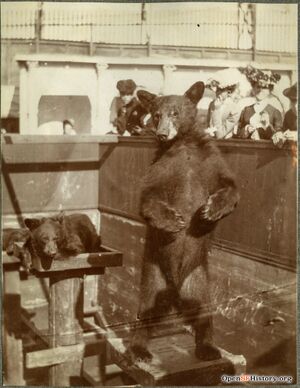 There was also a large building known as the Casino built next to the Chutes tower in 1896. The Casino building held vaudeville performances and soon added a roller skating rink, an emerging fad then. On June 27, 1897, Atkinson opened a 3000-seat theatre in the Casino called, appropriately enough, the Chutes Theatre. The theatre continued to showcase vaudeville acts, but was able to handle bigger crowds.

As a further attraction, Ackerman created a zoo with a variety of animals, including, lions, bears, jaguars and leopards, kangaroos, wallabies, monkeys and orangutans, a tiger, an alligator, and a hyena. When one of the animals died, it suffered the sad fate of being stuffed and mounted in the Chutes Museum. It is unclear when the zoo opened, but advertisements for the Chutes began to mention the zoo in March 1898. Those advertisements were sure to note when the carnivores would be fed.

In August 1898, those advertisements began promoting a Camera Obscura at the Chutes. At the top of the Chutes tower, Ackerman had a Japanese-style structure built with a Camera Obscura in it. When passengers got to the top of the tower, they went through the structure and got a panoramic view of the area around the Chutes before the ride returned them to the bottom. In addition to these attractions, there was also a shooting gallery, a second, English-style merry-go-round where the horses went up and down, a maze, an arcade, a ball toss, and a photo studio. Special attractions like balloon ascensions were also held there. 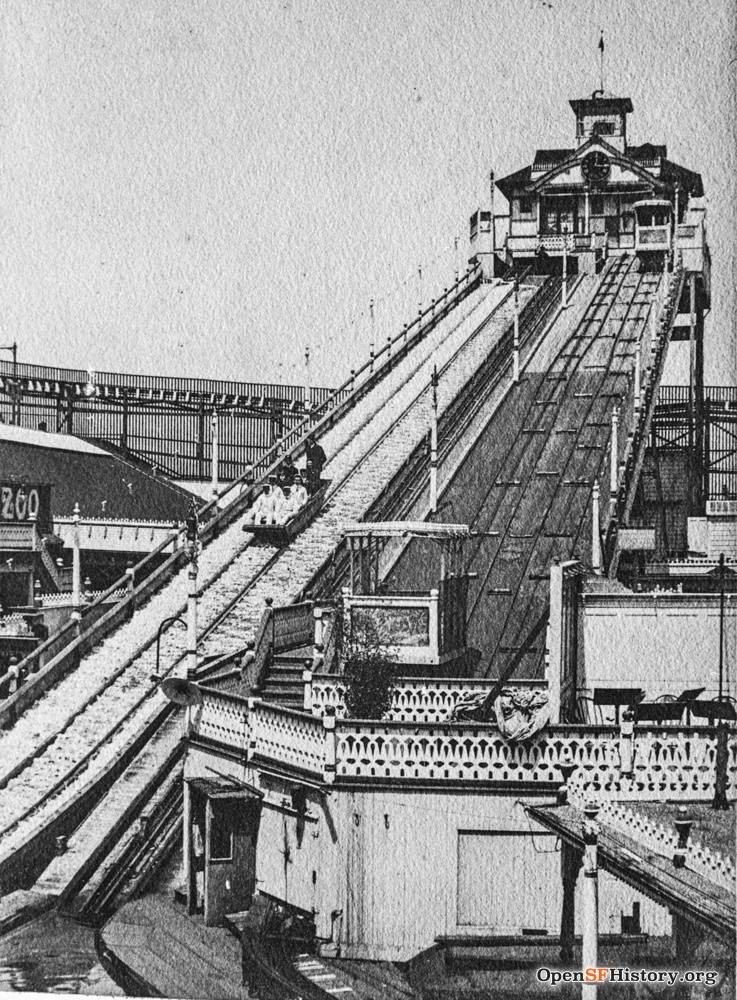 Haight Street Chutes with Camera Obscura on tower, circa 1900.

Visiting hours at the Chutes extended from the early afternoon into the late evening. Although the Haight Street Chutes were a success, it was living on borrowed time. In 1901, John Baird’s youngest child turned 21 and Baird’s estate began to be liquidated and distributed to his heirs. This resulted in the end of the lease for the Haight Street Chutes property. Putting their best spin on the situation, the Chutes announced that they had outgrown the premises and needed to move.4 Closing day was March 16, 1902. This would not be the end of the Chutes story though. We’ll have the next chapter soon.