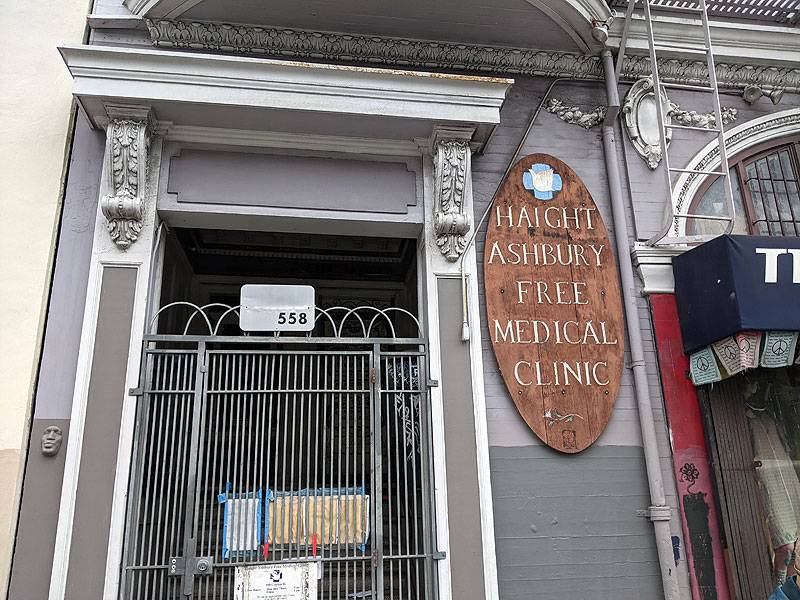 from “Health Care—A Right, Not a Privilege: Interview with Dr. David E. Smith,” Share International, May 1993 conducted by Jan Spence

Dr David E. Smith founded the Haight Ashbury Free Clinic in San Francisco in 1967. In the intervening years, the clinic has expanded to over 20 sites in the Bay Area, with 200 paid staff and 500 volunteers. Funding is primarily through city, state and federal government, although the clinics do receive some private funds.

Dr Smith is president and medical director of the clinics. His specialties are Addiction Medicine and Clinical Toxicology. He is also a writer, professor, lecturer, adviser and consultant in his field.

According to a statement by Smith: "The Haight Ashbury Free Clinics is a community-based non-profit health care agency dealing with many of society's most difficult problems, including primary health care, chemical dependency, AIDS prevention and treatment, and women's health issues. All of these services are rooted in the Free Clinic's philosophy that evolved when the first Clinic opened in June 1967:

— Health care is a right, not a privilege. It should be free at the point of delivery for all who need it.
— Primary health services should be comprehensive, non-fragmented, and decentralized.
— Medicine should be demystified, non-judgmental and humane. Health care should be delivered in a courteous and educational manner. When possible, patients should be permitted to choose among alternative methods of treatment.
— Health care skills, with an emphasis on preventive medicine, should be transferred to worker and patient alike. The worker and patient should be permitted to practice and share these skills.
— Health care should be delivered via a team philosophy, granting respect and authority to each team member's skills and expertise.
— Community and worker input should be established. Free medical clinics should be responsive to the people who use them and work in them.

Dr Smith goes on to say: "The 'Free' in Free Clinic refers more to a state of mind than to the absence of a cashier. Free means an entire philosophy of service in which the person is treated rather than his or her disease; it is an important distinction. In a free clinic the focus is on health caring for the whole person, on providing a service which is free of red tape, free of value judgements, free of eligibility requirements, free of emotional hassles, free of frozen medical protocol, free of moralizing, and last and least, free of charge."

Jan Spence: Refresh my memory. Tell me about the Haight Ashbury neighborhood in San Francisco in the 1960s.

Dr. David Smith: The new counter-culture community began to emerge. Many young people with strong political and anti-war feelings arrived with smiles, flowers and backpacks. It was predicted that at least 100,000 young people would flock to the Haight Ashbury district when school was out in 1967. There were also reporters, television crews and sociologists. It was the San Francisco renaissance in technicolor.

JS: What prompted you to open the Haight Ashbury Free Clinic?

DS: I had lived in the Haight Ashbury for 32 years. I was going to the University of California at San Francisco (UCSF) medical school, specializing in psychopharmacology—the study of the effects of drugs on the mind. And I was experimenting with LSD at UCSF. On returning home I would see the hippies and flower children in stages of bad 'acid trips' [LSD experiences]. The powerful hallucinogenic and consciousness-altering properties of LSD were being explored by a growing number of young people. The term 'psychedelic' was coined for what experimenters called its mind-expanding effects. Psychedelic became the label for a number of consciousness-altering drugs and for the people who had their consciousness altered by them.

On the opening day of the clinic, over 250 patients were treated, including more than 40 cases of venereal disease and 15 cases of hepatitis. The primary drug concern was bad LSD trips.

JS: Was that when the 'Clinic' became 'Clinics'?

DS: Yes. With the increase of drug use, we needed more space to provide counseling and crisis intervention for the psychedelic bad trips. None of the established health centers in the area met the needs of the Haight Ashbury's new population.

JS: I have read in one of your books: "Everyone told me that I was making a big mistake if I opened a Free Clinic."

DS: There was a hostile environment to the counter-culture. Treating addicts on an out-patient basis in a community-based setting was severely criticized. My malpractice insurance was cancelled.

JS: Today you are dealing with some of our society's most serious problems.

DS: We have a big program dealing with education and intervention with intravenous drug users. We have expanded into a network including jail psychiatric services; rock medicine, a medical service at rock concerts including the Grateful Dead, who played a big part in the history and culture of the 1960s era; The Smith House, a detoxification center for women; MAMA Project (Moving Addicted Mothers Ahead), where mothers will lose their babies if they don't get into drug recovery; and a drug education and prevention program in schools. We have 500 out-patients daily; the majority are drug related. We have 52 different recovery group meetings a week. Patients are learning to live a life without drugs.

JS: What, in your experience, causes people to take drugs?

DS : As I understand it, the cause of addictive disease is genetics plus environment. Anybody is liable to addiction. If there is drug availability, peer pressure, psychological stress, an individual may experiment with drugs. But some people, when they experiment, rapidly lose control and develop addiction. This is based on an interplay of pharmacological factors: the effects of the drug, the environment in which they take the drug, and the stress and genetic vulnerability of that individual. Those who are genetically predisposed to addiction react differently to drugs from those who are not.

JS: What are the spiritual dimensions of drug abuse and treatment?

There's also a growing awareness that there's a spiritual crisis in our society. Some individuals—in fact, many individuals—are seeking a drug solution to that spiritual crisis. That's the reason our recovery process, with its emphasis on the spiritual dimension of addiction, works so well.

JS: What approaches have you found that work best to help people get off drugs?

Addiction treatments can be divided into drug maintenance and drug-free approaches. Drug maintenance would be, for example, methadone maintenance. The drug-free approach would be a type of medical, psychological, and spiritual approach such as the one we use. People are taken into the clinic, evaluated medically, detoxified, given individual and group counseling, and directed toward a recovery group. We also use a range of medications including post-detoxification, anti-craving drugs that reduce the craving for drugs, as well as blocking agents that help block the relapse back into their drug addiction.

JS: What about alternative approaches such as acupuncture?

DS: We use acupuncture as a relapse prevention technique. It appears to decrease drug hunger. We can also use acupuncture rather than a narcotic as a pain medication. Additionally, we focus on holistic approaches: don't get too hungry, too angry, too lonely, too tired. Exercise. We have a holistic as well as a pharmacological approach to recovery.