Howard Thurman (1899-1981) was one of the greatest American preachers and spiritual leaders of the 20th century. As a prolific author, inspired speaker, and spiritual advisor to Martin Luther King, Jr., Jesse Jackson, A. J. Muste, and countless others, Thurman touched many lives with grace and quiet wisdom. His was a life of firsts: the first African-American dean of a white university, cofounder of the first multiracial and multi-denominational church in the United States (the Church for the Fellowship of All Peoples in San Francisco), and first African-American religious leader to meet with Mohandas K. Gandhi. His response to Gandhi's critique of Christianity blossomed forth in 1949 with his best-known book, Jesus and the Disinherited, which sought to answer the question: what does the religion of Jesus have to say to people with their backs up against the wall? This slim and remarkable book influenced many people with its blend of Gandhian principles of nonviolent social change and his own Christian pacifism and mysticism. It is said that Martin Luther King, Jr., carried this book in his briefcase throughout the turbulent 1950s and 1960s.

As someone who spent twelve years editing the papers of Martin Luther King, Jr., I am not immune to the entrancing rhythms and transforming rhetoric of the African-American social gospel. But Howard Thurman's sermon and writings are a world apart. The quiet wisdom of Thurman remains a pillar of strength for all who encountered him in person or through his writings. As his eloquent wife -- herself a noted activist, writer, and spiritual mentor, Sue Bailey Thurman once said, "he helped move the stumps out of the way for so many people." In the months before and after her death on Christmas Day 1996 I spent dusty hours cataloging several thousand books in Howard Thurman's former library at 2020 Stockton Street in North Beach. The inscriptions on many of the books testify to the great spiritual influence that Howard and Sue Bailey Thurman had on so many lives. As Jesse Jackson once said, "I shall forever cherish the moments seated at his feet and listening to his searing questions that continue to haunt me in search of my truest and most authentic self."

Howard Thurman may have been the pastoral leader of the modern black freedom struggle but his legacy of grace and love extends much further than that. As Martin Marty suggested, "it is as hard to squeeze him into local, temporal, or ecclesiastical categories as we find it hard to dislocate him from the places and traditions on which he drew in his preaching, writing, and influencing. Is he, perhaps, in the tradition of saints, Howard of San Francisco, of Boston, of the United Nations?" He drew from, and contributed mightily to, several bedrock traditions: African-American Christianity, Quaker mysticism, Gandhian nonviolence, principled pacifism, and an ecumenical appreciation for the spiritual truths of all religions.

His spiritual and prophetic voice have at times attracted New Age readers, but Martin Marty notes that the foundations of his work and life are so strong that he will escape "evaporation in New Age spirituality." Marty continues: "In that crowd, which confuses the soul-search of the sort Thurman undertook with gaseous and self-invented spirituality that is easily marketable and consumable, he lasts only momentarily and has only superficial ties and influences. He is too demanding, too historically rooted, too Jesus-centered to remain the guru of choice through the years." What are those roots?

Howard Thurman was born on 18 November 1899 in Daytona, Florida. His grandmother was a strong influence, a deeply religious woman who had been born a slave. In 1923 he graduated from Morehouse College as the class valedictorian, then attended Rochester Theological Seminary as one of two black students in the all-white northern divinity school. Once again graduating as valedictorian (and student body president) he shunned additional graduate training and became a pastor in Oberlin, Ohio, in 1926. From there word of his talents and abilities spread as he became one of the most popular preachers in the interracial student Christian movement of the 1920s. By the late 1920s he joined one of the many national boards that sought his guidance as he became the first African-American board member of the Christian pacifist organization, the Fellowship of Reconciliation.

In 1928 he returned to the South as professor of religion and director of religious life at Morehouse and Spelman Colleges, spending a summer with the Quaker mystic Rufus Jones in Pennsylvania. In 1932, two years after the death of his first wife, he married the writer and Christian student movement leader Sue Bailey and moved with her to Washington, D.C., where he became professor of Christian theology at Howard University and later dean of its chapel.

In 1935 the Thurmans traveled to India, Sri Lanka, and Burma as part of an all-black Christian delegation and met Mohandas K. Gandhi - the first dialogue between the Indian apostle of non-violence and an African-American religious leader. The criticism of Christianity expressed by Gandhi and others who had experienced the dark side of evangelical Christianity and its support for imperialism prompted Thurman to explore the radical social dimensions of the religion of Jesus. His fine book Jesus and the Disinherited, published in 1949, influenced many of the religious leaders of the black freedom struggle in the 1950s and 1960s. He would later sit on the boards of the Congress of Racial Equality and the NAACP and served as a spiritual adviser to several generations of civil rights leaders.

In 1943 the well-known pacifist and national secretary of the Fellowship of Reconciliation A. J. Muste asked Thurman if he knew anyone interested in helping establish the Church for the Fellowship of All Peoples in San Francisco. To great surprise, Thurman resigned his position at Howard and moved to San Francisco to become co-pastor of the first multiracial and multi-denominational church in the US. (The church was first housed in a Presbyterian church at 1500 Post Street whose Japanese congregation had been rounded up and sent to internment camps.) 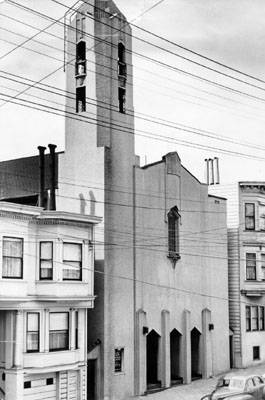 The Church for the Fellowship of All Peoples eventually found a home at 2041 Larkin Street where it still remains. The church is now a National Historic Landmark [though this was not verified at press time].) Thurman served there from 1944 to 1953, when he accepted a position at Boston University as professor of spiritual disciplines and resources in its School of Theology and dean of Marsh Chapel, thus becoming the first black dean of a largely white university.

Thurman's years at Boston University were among his most productive. He soon became popular, with regular radio and television appearances. His innovations in worship services and teaching contributed to his growing fame. But it was his growing stature as a deeply spiritual yet engaged preacher that led to his recognition in Life magazine as one of the greatest preachers in the United States. He was arguably the most thoroughgoing integrationist of his generation, a pastor who brought the integration ideal right into the institutional heart of black and white society: the church worship service. His experience as a pastor and spiritual mentor deepened in the exciting multiracial experiment that was Fellowship Church. He sought to make the church a refuge. It was important, Thurman wrote, that individuals who are in the thick of the struggle for social change would be able to find renewal and fresh courage in the spiritual resources of the church.

Thurman had a remarkable ability to help people in crisis find quiet support for their weary soul. Thurman's pastoral ministry . . . extended beyond the public sphere to personal encounters with individuals who found in his presence a cove to experience the literal truth of God. At the height of the Montgomery bus boycott in 1956, when Martin Luther King, Jr., was being hounded by death threats and the extreme pressures of newfound fame, Thurman invited King -- who knew Thurman from his years at Boston University as a graduate student though not as a close associate, to spend a few quiet hours with him in prayer. Thurman's attention to the spiritual dimensions of the black freedom struggle made him the recognized pastoral leader of the civil rights movement. 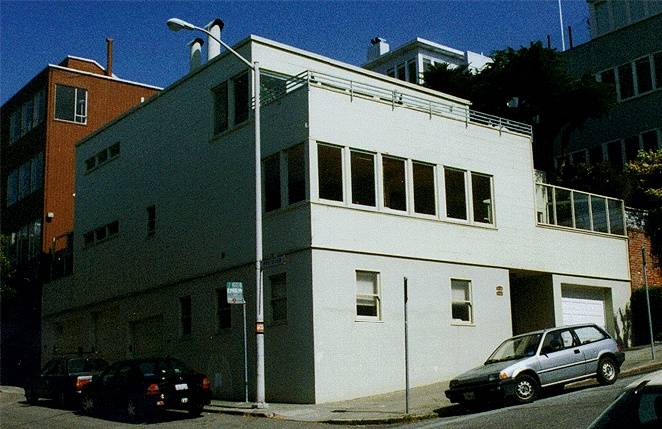 Howard Thurman, renowned but forgotten African-American theologian, lived here at 2020 Stockton Street from 1965 until his death in 1981.

In 1965 Thurman retired from Boston University and returned to San Francisco to establish the Howard Thurman Educational Trust. His home on Stockton Street housed his extensive private library and more than 800 audio recordings of his sermons and meditations. He died on 10 April 1981 in San Francisco, leaving his widow Sue Bailey Thurman and two daughters who still live here.