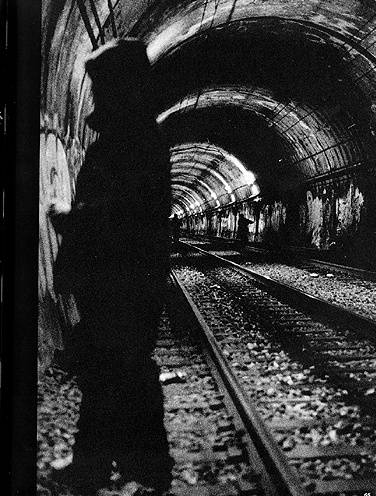 Graffiti artist at work in a MUNI tunnel

This article is an attempt to understand graffiti by tracing its genealogical roots through the past and into its present transformations. To the creators and enforcers of social order and normative value, graffiti is vandalism, an ugly and terrifying threat to social value, which not only frightens but cost US taxpayers billions of dollars a year. For graffiti artists, graffiti is a secret language of self--expression, an urban calligraphy of the oppressed and a screaming political expression of outrage against an unjust and alienating political--economic order.

Graffiti writers are urban shamans and the streets are our modern day caves! --Crayone

Crayone's self understanding of graffiti as shamanic art is certainly not universal among graffiti artists, but it does provide an interesting and suggestive interpretive frame to understand the history of the natural, symbolic and ritual forces at work in modern graffiti art. Cave art takes us back some 30,000 years to the time when humans first discovered the potential of the wall as an expression of self and its relationship with the Other. The world envisioned through the ecstatic rituals of the shaman was a vast interconnected social matrix of human-like powers and forces, some benevolent, some malicious and dangerous. Shamans were liminal beings who communicated with the gods and creatively transformed these social forces through ecstatic ritual trance and symbolic artistic expression. In the shaman's trance the Dionysian forces of creative (and destructive) inspiration were harnessed for the Apollonian beauty of cosmic and social harmony.

The radically social and communal world of the prehistoric shaman was significantly different from the impersonal and alienating world of urban streets, concrete walls and the social-economic stratification of modern day graffiti artists. The historical displacement of the shaman by the shaman-priest in early history corresponded with the rise of complex social hierarchy and economic-political stratification. The sacred and dangerous taboo became Law, the ordering principle through which the values of the emergent elite and their gods penetrated the minds, bodies, and behavior of the masses. The emergent meaning of "graffiti" takes on its historical identity in this context as an act of creative (and destructive) ritual transgression against an Apollonian hierarchy and repressive political--economic order.

Many of the graffiti artists interviewed for this article were liminal personalities who judged the system from the social and psychological thresholds of social order and normative consciousness. They saw themselves as revolutionaries outside the normative art market of the gallery system and the utilitarian values of the capitalist social order. They understood the surreal dreamlike images of their art as ideological statements and symbolic transformative instruments for initiating social change.

I create illegal graffiti because I see it as a political act against the structure of how things are--the whole idea of property ownership, people who think they can own property. How can someone claim to own a piece of land that was there way before they were and will be there after they're gone? What kind of right do they have to say 'I own this?' We all own this...Graffiti is a kick in the face of the Gallery/Museum system, where the artist is pimped like a whore for the capitalist system, made into another commodity for people to buy . . .This art is free for all to come and view----no one can own it, it belongs to all of us. --Eskae

In Eskae's commentary we can sense the communal values of the archaic shaman's world before complex political--economic stratification. It is this ideal world (real or dreamed) of social harmony that provides the powerful symbolic contrast with modern urban capitalist culture and its perceived injustices and inequalities. The art market is seen as part of this social and cultural construction of reality that is challenged by "free" graffiti art. Of course, graffiti is not free; it costs billions of dollars a year in abatement enforcement. But this misses the point. The power and beauty of graffiti is related to graffiti as a symbolic political statement and as a form of ritual empowerment; it is an ironic power that feeds from and transmutes the power inherent in the laws and institutions that legitimize the values of modern urban culture. In this sense the formal and creative beauty of graffiti art is related, and in some sense subservient, to the power of graffiti as ritual transgression. 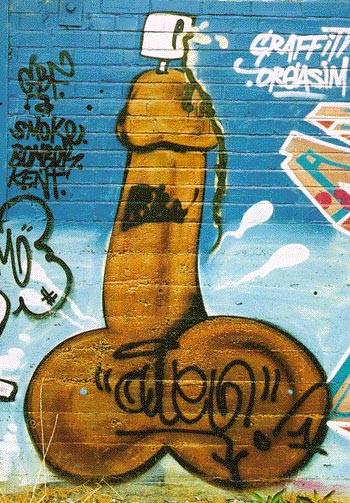 Foucault and Bataille recognized sexual taboo as the matrix through which the normative and institutional powers of the sacred--secular order and value penetrated social bodies (language/thought/speech/ behavior). But this power is paradoxical and ironic: the forces and values that generate law and taboo also provide the normative and "sacred" contexts for the power derived from their ritual transgression. Crayone's shocking statement, like his graffiti art, can be understood within this light as the energy and power of transgressive ritual play, a symbolic dialect(ic) penetrating and transmuting the normative forces of value and taboo.

"It's addictive. Its gets you high. But high on your own achievement. You created!" --Krypt

"I've heard statements when asked why they do graffiti that it makes them feel immortal. I believe the graffiti problem stems from a widespread lack of respect for public and private property." --Scott Shaw, Supervisor for the City of San Francisco's Public Works Department

The sacred--secular of the dominant capitalist culture manifests itself through the laws and "markets" that construct capitalist social order and value, especially the value of private property. But for individuals and groups on the fringes of normative society, power and sacred value manifest themselves through the symbols of a better world and the ecstasies of creative ritual transgression. For many Graffiti artists, the power and beauty of graffiti art is related to graffiti as a ritual and symbolic act of transgression against the normative capitalist value system and the alienating world it constructs and maintains. The targets of graffiti art, the "public" and private buildings, are symbols of the social body and normative capitalist identity. Graffiti artists knowingly and willingly "tag" and "bomb" the most sacred "things" of the capitalist's value hierarchy; the more sacred the symbol and taboo, the more "attractive" and empowering the transgressive ritual act. The recent initiation of more severe laws and penalties for graffiti, and the millions of dollars spent on graffiti abatement, has initiated an equal and opposite surge of graffiti energy--a power drawn from the symbolic and ecstatic act of ritual transgression. When graffiti artists were asked if they would continue to do graffiti if it were legal, the answer was a unanimous "no." The meaning and power of Graffiti art is the paradoxical play of Apollonian beauty and the creative and destructive power of ritual transgression--the intoxication of Dionysus.