Friends of the Urban Forest 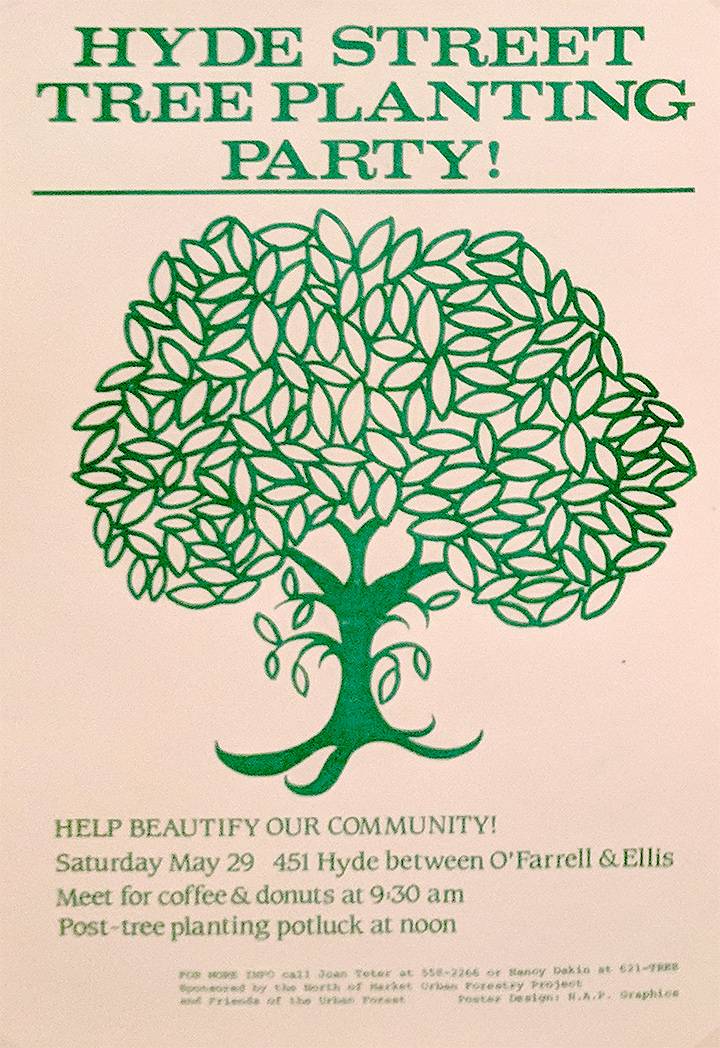 Early Friends of the Urban Forest campaign on Hyde Street, 1982. 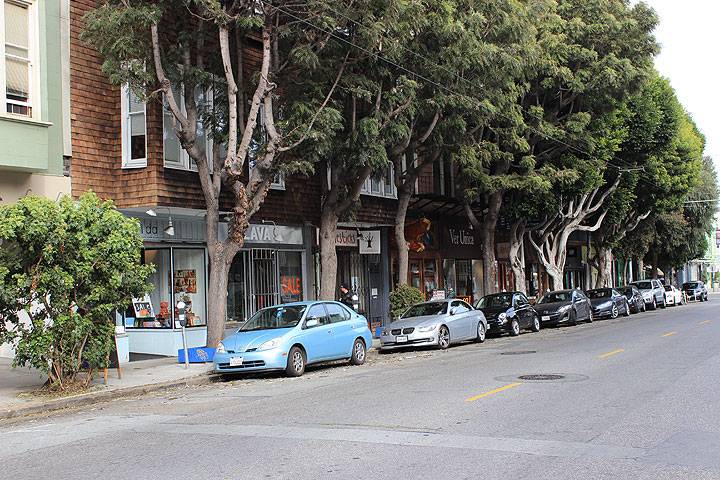 20-year-old street trees on Hayes near Laguna, planted by FUF in the 1990s.

To understand FUF comprehensively, we need to review the idea of “greening the city.” Nineteenth century city leaders, noting the growing separation of humankind and nature, set out to manage a re-harmonizing of the two. After various park planning efforts were undertaken and rejected, they settled on the large urban park space which became Golden Gate Park. As historian Philip Dreyfus notes, “The application of an industrial society’s managerial impulse to the creation of natural-feeling environments is certainly fraught with irony, but it had at least the positive legacy of leaving open spaces for future generations to enjoy.” (Our Better Nature, 67) Urban green space, fully man-made, is not the same as “real nature,” but ironically comes to be seen as natural as time passes. Between the 1850s and the early 1900s, upper-middle-class citizens believed that “parks increased real estate values and thereby benefited both private landowners and the public coffers, or that the aesthetic of parks was a morally transformative force that could soothe the ills of an urban industrial society.”(Dreyfus, 68) Despite the successes in creating tree-filled parks, in the 1960s there was a striking lack of trees on San Francisco’s streets. During the 1970s, the city government began some street tree plantings, but in 1981 the tree planting programs stopped in most of the city’s neighborhoods. The city’s tree-hugging residents then formed Friends of the Urban Forest, and this group conducted weekly Saturday morning programs “in which residents and volunteers collaborate to plant and care for street trees”. (Sullivan, 9) The city’s man-made green areas contribute to a unique and beneficial environment for both trees and humans. 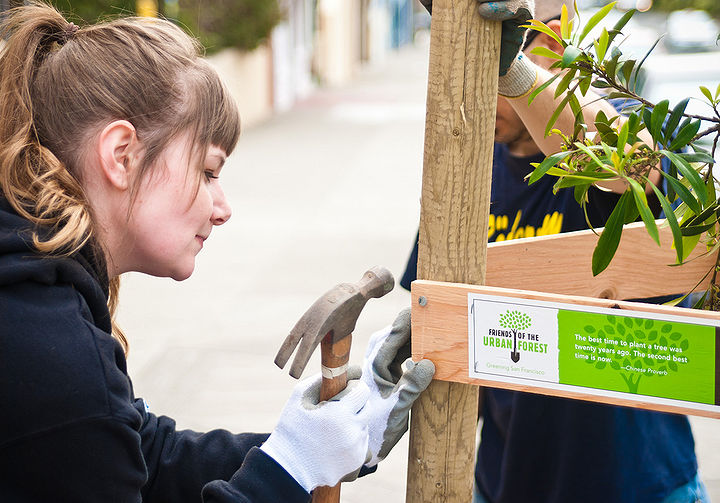 In 1978 the government issued the California Urban Forestry Act, and updated the Act in 2008. According to this legislation, “urban forestry” means the cultivation and management of trees in urban areas for their present and potential contribution to the economic, physiological, sociological, and ecological well-being of urban society, and “urban forest” means those native or introduced trees and related vegetation in the urban and near-urban areas including, but not limited to, urban watersheds, soils and related habitats, street trees, park trees, residential trees, natural riparian habitats, and trees on other private and public properties. The definition is embraced by FUF. The act also mentioned that “The department shall assume the primary responsibility in carrying out the intent of this chapter in cooperation with statewide and regional urban forestry organizations or associations and arboricultural organizations or associations, other private and public entities or persons, and appropriate local, state, and federal agencies,” which benefits organizations like FUF. (California Urban Forestry Act, 2008) 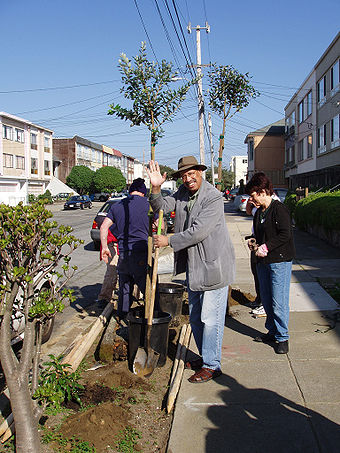 George and Christies Martha; photo: Friends of The Urban Forest
The tree-planting programs of FUF include the Neighboring Tree Planting, Tree Placement, Sidewalk Landscape, and Trees for Tomorrow (planting trees around schools). With all its success in street tree planting, FUF is increasingly focused on tree care, with the programs of Early Tree Care (follow-up visits for young trees), Emergency Tree Care, and TREEage (weekly rounds to treat damaged trees). The group now provides tree pruning and tree care visits for trees after 18 months and 3 years, and intends to care for all FUF trees through 5 years. FUF aims to bring people together for a better environment, and has special community engagement programs like Community Outreach, Corporate Workdays, sTREEt Team (promote upcoming tree plantings), Tree Tours, and Urban Forest Map (crowd-sourced tree census). 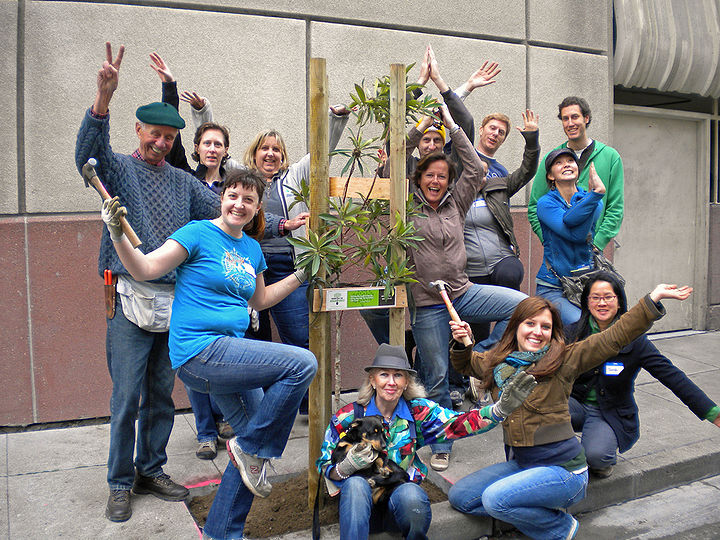 FUF declares its goal is to “promote a larger, healthier urban forest as part of San Francisco’s green infrastructure through community planting, tree care, education, and advocacy,” and effectively apply it in different programs. Of course this attitude should be encouraged, but the concept of “planting trees” as part of “human invented nature” is still controversial. According to a research of “Street Tree Populations” in 2001, the top five popular trees in San Francisco are purple-leaf plum, Japanese flowering cherry, New Zealand Christmas tree, small-leaf tristania, and strawberry tree. Of the top 20 trees, not one is a California native, and only the magnolia is native to the United States. (Sullivan, 84) Some people argue that the imported trees planted on streets are actually invading and eventually destroying the native ecology system. This problem is also discussed in Our Better Nature: “the popularity of invented nature, which contemporary urbanites share with nineteenth-century San Francisco, is no crime, but it nonetheless reflects something very unsettling about what nature becomes in an urbanizing world.” (Dreyfus, 96) Nature can be both created and destroyed by humans in the same way.

The loss of native vegetation in California has a long history. Change in the landscape is inevitable when economic prosperity is manufactured from natural diversity. (Faber, 1) European invaders were uncomfortable with the strange wilderness in California, and they rearranged the land into more familiar patterns. “Within two centuries, woodlands have been cut and replaced by orchards, highways, and cities; marshes have been drained and converted into farms and airports; redwood forests are now Douglas-fir forests, and Douglas-fir forests are now tanbark and madrone thickets; montane conifer forests have been converted into grassland; California prairie has become farms and cities; sand dunes have become city parks, neighborhoods, and golf courses. All this change was brought about with energy and optimism and anthropocentric energy that typified nineteenth century America.” (Faber, 2) The “mission” of FUF, planting street trees in favor of the citizens, although a little different in its means and goals, is actually filled with this “optimism” and “energy.” The destruction of natural vegetation, or man-made altering of plants in certain area, “produces drastic and often irreversible changes in the landscape that affect humans directly.” This view may be extreme, but it’s necessary to reconsider the native plants in San Francisco and look upon the “original” landscapes whose “diversity, resiliency, and sustainable productivity are greatly diminished.” (Faber, 4)

Urban Forestry, as FUF focuses on, seeks to remedy an unbalanced ecology brought about by rapid urbanization. And through trial and error over the past 20 years, FUF has helped San Franciscans learn which trees are best suited to the city’s unique conditions. The choices of street trees, however, could be more oriented to native and endemic species of the area. By overviewing the history, methods, and goals of FUF, we should value and encourage the efforts of this organization, and at the same time, expect more from them to keep the planting as native as possible.

Friends of The Urban Forest