Originally published in The Semaphore #207, the publication of the Telegraph Hill Dwellers Association

Francisco Reservoir as it looked in 1904. 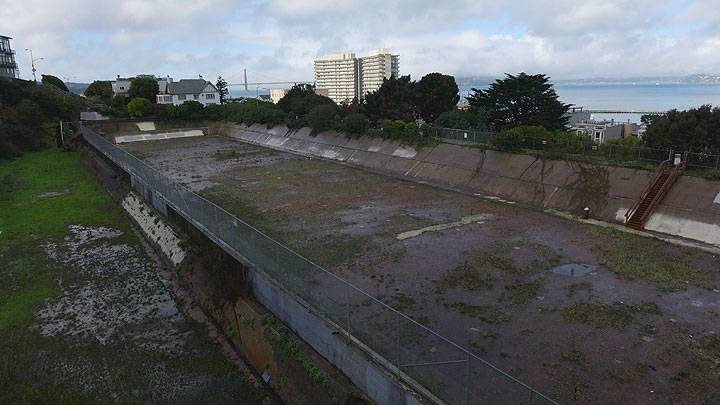 It took more than 60 years to achieve the once in a lifetime opportunity of turning the defunct Francisco Reservoir into a city park. The site has been a neighborhood eyesore for decades. Why did it take so long? Read on to find out. 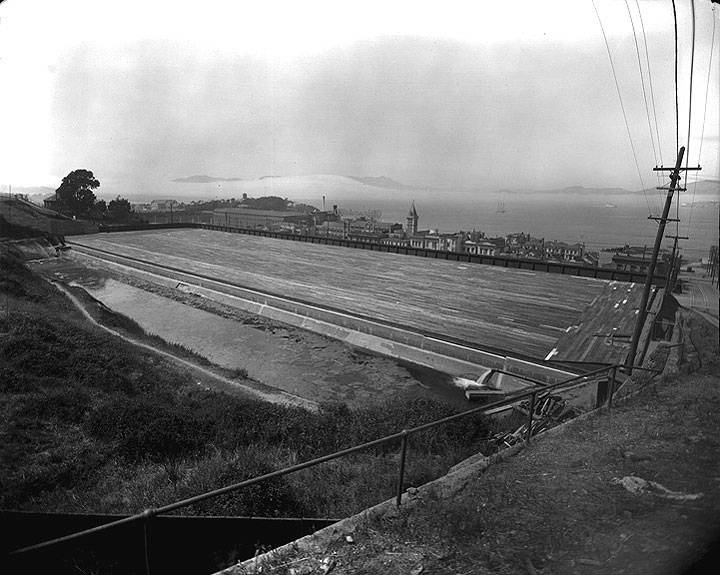 On July 22, 2014, the Board of Supervisors unanimously approved Agenda Item No. 34 to transfer the defunct Francisco Reservoir from the San Francisco Public Utilities Commission (PUC), to the Recreation and Park Department (RPD) in order to create a new public park for San Francisco. San Francisco District 2 Supervisor Mark Farrell’s proposal called for RPD to take over jurisdiction of the entire 4.25 acre Francisco Reservoir property for the purpose of creating the park.The appraised market value of $9.9 million will be paid over 12 years to the Public Utilities Commission from the San Francisco Open Space Acquisition Fund. The Memorandum of Understanding (MOU) that will document the transfer should be executed by the end of September 2014.

Four surrounding neighborhood associations had partnered together to form the Francisco Park Working Group, the lead organization that coordinated all community efforts. The group was made up of members from the Russian Hill Improvement Association, Aquatic Park Neighbors, North Beach Neighbors, and Russian Hill Neighbors. Their persistent, extraordinary effort will benefit San Francisco residents and visitors for decades with this once in a lifetime opportunity to create a park from “surplus” land. The parcel is even flanked by the Hyde Street cable car line, and this, along with the magnificent sloping site, makes for the quintessential San Francisco experience. The sounds of sea gulls, parrots, clanging cable cars will mix together perfectly. It is expected the next step will begin with a second phase of community-driven proposals leading to the final design of the new park.

The story actually began over 160 years ago, in the mid 1800s, when the population of San Francisco was growing exponentially, due in part to the fact that San Francisco was the main port of entry during the Gold Rush. A wooden flume from Baker Beach travelled along the coast near the Presidio, past Fort Point and Fort Mason to the pumping station at the foot of Van Ness Avenue. 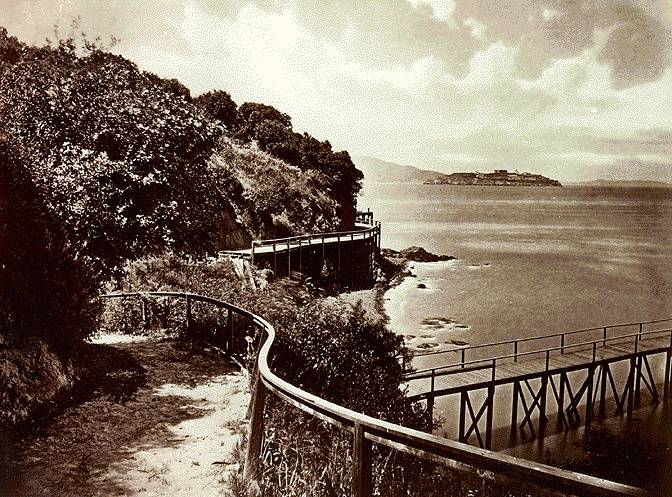 Black Point (now Fort Mason), 1870. Spring Valley Water Co. brought water through the flume that skirts the cliffs. Small farms run down to the shore. Alcatraz is in the distance.

It was in 1861, during the Civil War, that the San Francisco Water Works built Francisco Reservoir, constructed to hold 2.5 million gallons of water. And so it went until the 1930s when the city acquired property through the purchase of the Spring Valley Water Company which allowed for construction of a second reservoir. By the 1940s, the Francisco reservoir became obsolete with the construction of the new Lombard Reservoir, just up the hill, now covered by tennis courts.

In May of 1958, the water department officially declared Francisco Reservoir surplus and prepared to sell the parcel to developers. The developers’ plans were for two 20 story apartment buildings taking up most of the original site. During the 1960s, debate over development plans continued although local and vocal opposition was growing. 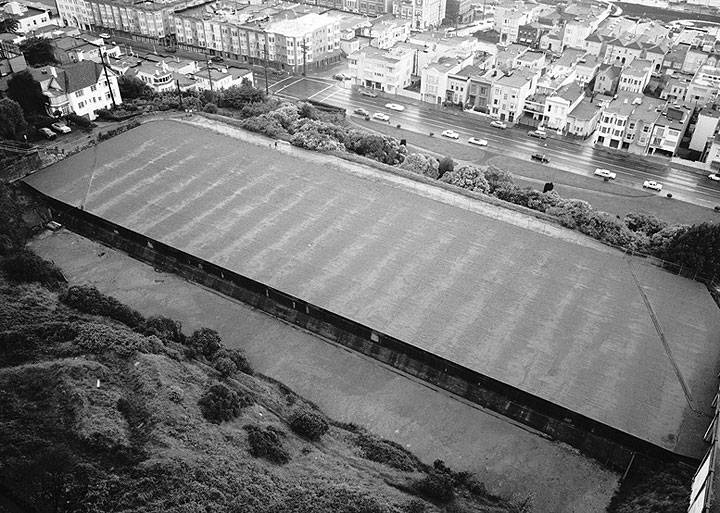 Looking down at the reservoir and Bay Street in 1962.

On Sept. 25, 1958, the Parks and Recreation Department sent a letter to Mayor George Christopher outlining why the entire property is necessary to “provide adequate recreation and park services for this densely populated district”. On Sept. 30, 1958, the PUC declared the property no longer surplus due to overwhelming resistance to commercial development at the site. And so it went, literally for decades, as citizens fought against developers for control of this grand parcel of urban land. To the horror of many, in 2006, the PUC decided, once again, to declare the property surplus and prepared it for sale.

The Francisco Reservoir Working Group was formed in June of 2011, and all was about to change for the better. From 2011 to 2014, the group worked tirelessly. The community effort finally paid off this year when the Board of Supervisors voted to approve the jurisdictional transfer of the Francisco Reservoir from the PUC to the Recreation and Park Department. 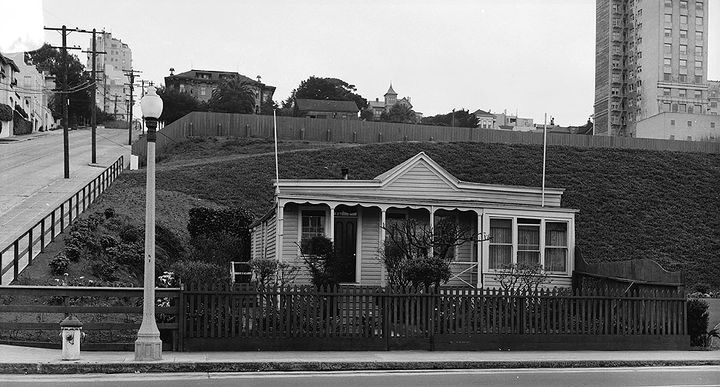 Reservoir keeper’s house at the corner of Hyde and Bay Streets, demolished in 1950 to make way for the current park.

Photograph courtesy of the Library of Congress, Prints and Photographs Division

Over the years, as a San Francisco native and life-time resident, I have visited the site many times. I have a secret parking space halfway up the hill, adjacent to the reservoir that always seems to be available when I need it. For many years the southwest corner of Hyde and Bay streets was the location of the reservoir keeper’s house. Historic records indicate the house was constructed between 1860 and 1865. It was demolished in the early 1950s to make way for the current park. The dwelling was one story with a small gable over the center and a glassed-in porch on the right side of a veranda. Although the reservoir keeper’s house is long gone, I am still greeted by a lovely view of the city by the bay when I exit my vehicle in the space magically reserved for me. Quite breathtaking this vista. Although I may lose the use of my secret parking space, in the next few years we all will gain a magnificent park.