Finding Wonder Women in the Tenderloin 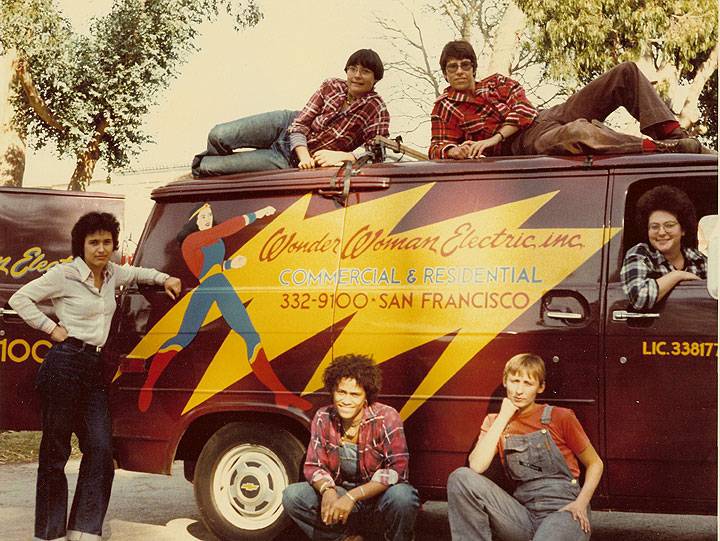 I needed to find an old-timer who had been there. So I set about describing this gritty watering hole, as best I could remember, to every old codger gay guy I knew. Nobody could remember having been there, or maybe they just weren’t talking.

I had a vague memory that the bar was associated with Charlotte Coleman, who owned a number of gay bars in San Francisco from the 1950s through the 1990s. During the 1970s Wonder Woman Electric worked on the electrical systems in many of her bars as well as in her home in Noe Valley. I learned that Charlotte, in her 90s, lived in an assisted living institution in Vallejo. Then I was lucky to meet an old friend of hers serendipitously. Roberta, in her 80s, regularly visited Charlotte and offered to drive me there to meet her.

In the meantime, I discovered a website, Lost Gay Bars of SF, with a map made by a guy named Mike Stabile that shows the locations of gay bars in San Francisco from the 1960s through the 1980s. I needed the name of the bar or the address to use this resource. I was stuck. But Mike responded to my questions in a Facebook message. He thought the bar might be Aunt Charlie’s Lounge on Turk Street, still there, perhaps the very last of the old Tenderloin gay bars. I googled Aunt Charlie’s and found an informative web page with interviews of some of the old timers. Could this be the bar I was searching for? It looked just as seedy as I remembered. And Aunt Charlie’s still has drag shows! I had to go there. 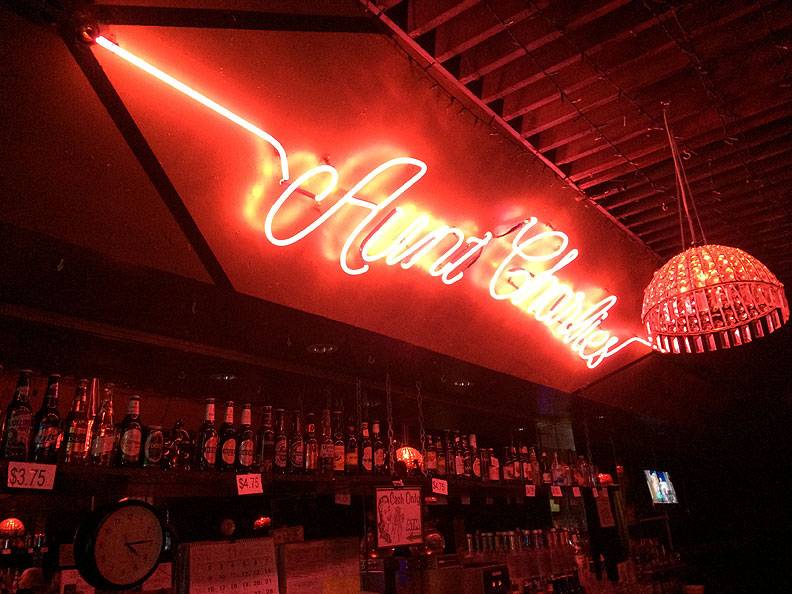 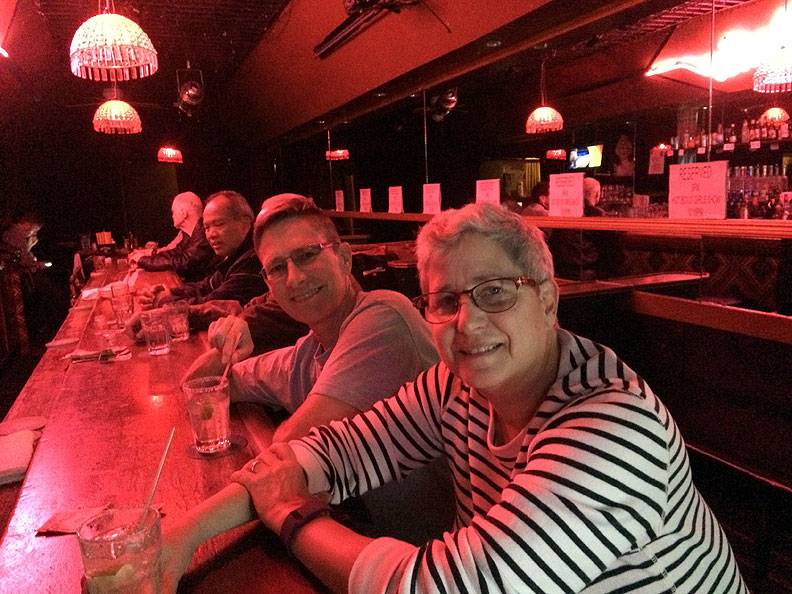 By the time I could arrange to meet Charlotte, her health had deteriorated and new visitors were no longer welcomed. But I did get Roberta on the phone and described the bar to her. Sure, she said, she remembered that bar. It was called the Blue and Gold and it was on Turk Street. It was a black and white bar, she said, meaning it was racially integrated. It was Charlotte’s most notorious bar, site of nearly nightly fights and disturbances. “They broke the toilet regularly.” But the Blue and Gold made far more money than any other bar, Roberta remembered.

Blue and Gold! I had the name! I had the street! Now I could use the Lost Bars map to locate the bar. I quickly found the address: 136 Turk. The description on the website said the piano bar opened in 1947 and closed in 1993. The Blue and Gold had been right across the street from Aunt Charlie’s Lounge. 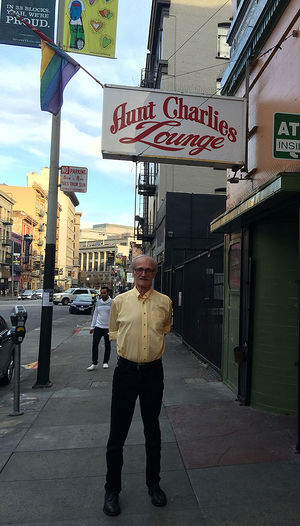 I chose a Saturday afternoon for a visit to Aunt Charlie’s, knowing that I’d be unlikely to stay up late enough to hit the drag show. The one hundred block of Turk Street still rates high on the funky list. But the bar’s regulars and bartenders welcomed us two old dykes and were happy to talk about the old days. Barry, who had tended bar at Charlie’s for decades, remembered the Blue and Gold, as well as dozens of other neighborhood gay bars, all closed. The building’s exterior had been covered in blue and gold tile, he said. (Nobody knows what the colors meant in 1947. A hangout for Cal alumni?) It has been painted over recently and it now houses the SF City Impact Rescue Mission. I noticed that the address is now 140, not 136, Turk. 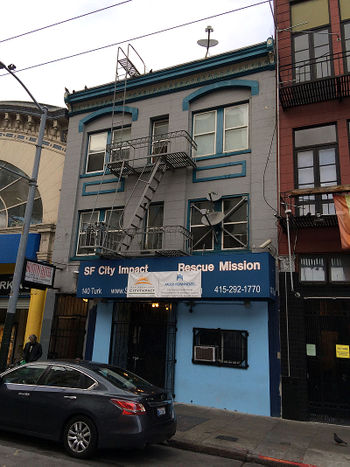 Original site of the Blue and Gold on Turk Street.

Feeling in a historical mood, we strolled the couple of blocks over to the new Tenderloin Museum, housed in the historic Cadillac Hotel. There we learned about the rich history of the Tenderloin neighborhood, including the gay and transgender scene in the 1960s. The Compton Cafeteria riot in 1966, “one of the first demonstrations against transgender and transsexual violence in San Francisco,” took place right up the street from the Blue and Gold. It was a fitting completion of my magical history tour.