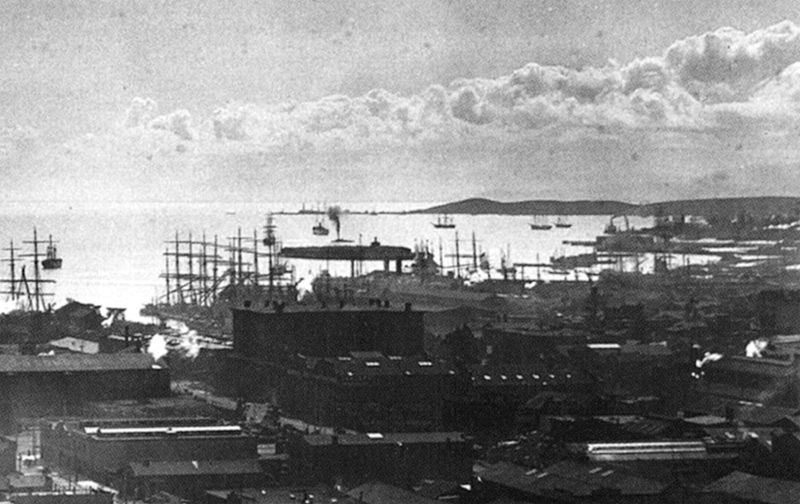 View south from Ferry Building, showing Mission Rock as low square-ish island in bay, and in distance Avisadero Point at end of Hunter's Point peninsula. Most of the water has been filled in in the last century.

After filling Yerba Buena Cove and the smaller cove at North Beach, the steam paddy worked for a dozen years filling up 450 acres – more than 2/3 of a square mile – of Mission Bay. By 1900, Mission Bay had been reduced to a few stagnant ponds. After the 1906 Earthquake and Fire, the city had to dispose of millions of tons of rubble to clear the way for rebuilding. Temporary rail lines were built to bring it downhill to the remaining waters of Mission Bay. By 1910, Mission Bay was gone, reduced to the narrow channel that first became known as the Hay wharf (since the Bay’s scow schooners unloaded cargoes of hay bales there) and later China Basin.

Along the city’s waterfront, the filling was limited only by the State Board of Tideland Commissioners’ 1869 ruling that set the city’s ultimate boundary where the bay’s waters were 24 feet deep at low tide – great for berthing ships but hardly resembling “tidelands.”

South of Mission Bay, the eastern half of Potrero Hill was gouged out by steam shovels and dumped into the bay in the 1870s, creating industrial flatlands where Union Iron Works built a shipyard, PG&E’s predecessor the San Francisco Gas Light Co. in 1872 built a plant to convert coal into gas, and sugar magnate Claus Spreckels built a sugar refinery. South of Potrero Hill was another extensive tidal inlet, Islais Creek – actually, an estuary of Islais and Precita Creeks, which once flowed into the bay here. It took a mile-long trestle, built in 1866, to bridge “Islais Creek.” Filling this estuary, however, was not so easy.

The square mile of wetlands and tidal mudflats at Islais Creek were initially considered worthless by the city government, which actually gave away the water lots here in 1861 to any buyer willing to pay $10 for the deed and notary fee. Nevertheless, the city gained an ongoing revenue source, since the buyers had to pay property taxes each year, with nothing to show for it for the next 45 years. After the 1906 Quake and Fire, however, the Federated Harbor Improvement Association announced plans for harbor development at Islais Creek and neighboring India Basin. They lobbied for a $1 million state bond issue (equivalent to about $20 million today) to buy back 173 acres of the same waterlogged lands that were deemed worthless in 1861. The bonds were issued in 1909, and the State Board of Harbor Commissioners used them to start purchasing the lots.

By 1925, however, there were still 63 owners and 549 parcels of tidal mudflats at Islais Creek. Harbor plans had gone nowhere because none of the owners, including the wealthy Southern Pacific and Western Pacific Railroads, wanted to pay up front for filling the area and building the harbor, which would require an expensive 2,200-foot-long seawall. So, they formed California’s first non-agricultural reclamation district to borrow the needed funds.

The sea wall alone required 475,000 tons of rock quarried from adjacent Potrero Hill and Bernal Heights. The 280-acre wetland area covered by the reclamation district took 10 years to fill, since the project relied on rock excavated in other nearby construction projects, such as the building of Bayshore Boulevard (finished in 1929). By the mid-1930s, the 280-acre area west of Third Street was filled in, and a new deepwater port opened: Islais Creek Channel, the only part of the estuary that wasn’t filled. 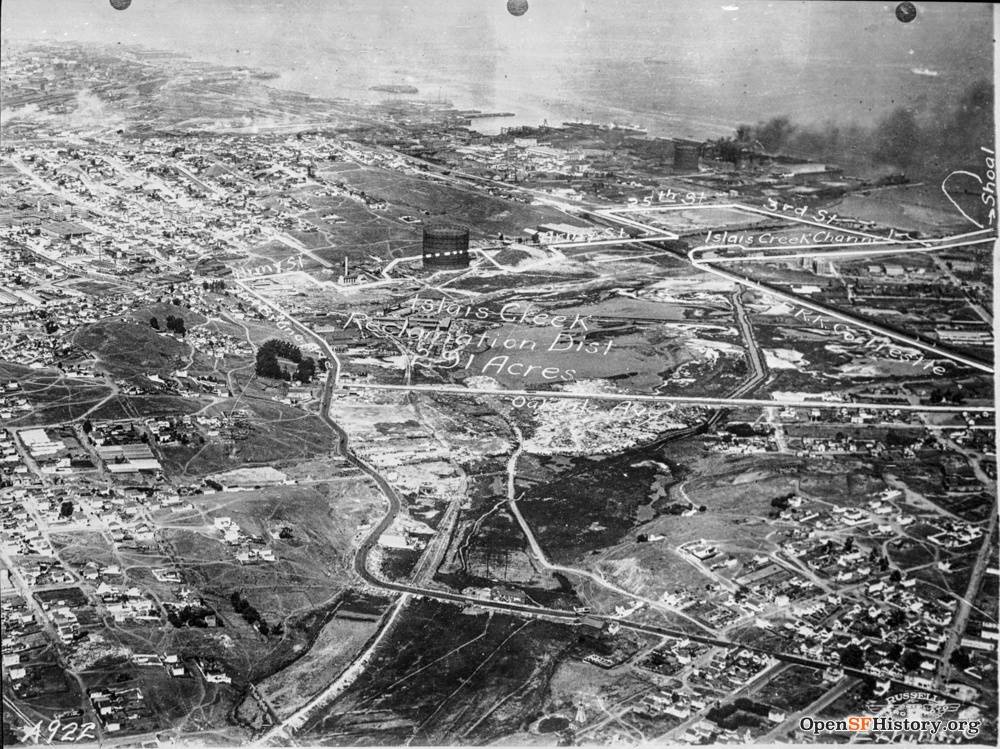 1920's image of the Islais Creek Reclamation District which has become the industrial zone between Bayshore Blvd. and 3rd Street.

In the 1940s, the frontier of bay filling shifted southeastward to India Basin, where the U.S. Navy in 1940 bought the end of a narrow, rocky peninsula, Hunters Point, to take control of a small drydock there. The Navy also bought the underwater properties surrounding Hunters Point. From 1940 to 1944, the Navy filled about a square mile of waters there to create the Hunters Point Naval Shipyard. And just west of Hunters Point, right on the San Mateo County line, bulldozers were gouging Bayview Hill in the 1950s and dumping it into the bay, creating a new flatland on which Candlestick Park and its surrounding parking lots were built by 1958. It was just in time to provide a home for San Francisco’s first major league baseball team, the Giants, formerly the home team of New York. Baseball fans soon learned to come to the park bundled up, because the summer winds at Candlestick were fierce.

In the late 1950s, another bay fill project started on the east (bay) side of Third Street, on both sides of the Islais Creek Channel. This was a San Francisco Port Authority project to fill 68 acres of open waters for Pier 80, a new port for containerized cargo. Financing came from a $50 million bond issue approved by voters statewide in November 1958. This massive project, started in 1963, began with removing four million cubic yards of bay mud under the 68-acre site, and replacing it with 4.3 million cubic yards of more stable sand and rock. Most of the mud removed was used to fill in waters a mile to the south, at India Basin. The rest was loaded on barges and dumped outside the Golden Gate.

By time Pier 80 finally opened in 1967, nearly all the containerized cargo coming into the bay was already going to the Port of Oakland for unloading. After all the expense and effort of building it, Pier 80 was never used to its full capacity. Just south of it, the city’s final fill project was a narrow artificial peninsula jutting into India Basin, intended for the western end of a proposed new Bay Bridge, which San Francisco voters rejected in 1972. After that the site was abandoned, and over the next three decades the city’s only salt marsh grew on it. Today it’s known as Heron’s Head Park, named after its shape on the map. 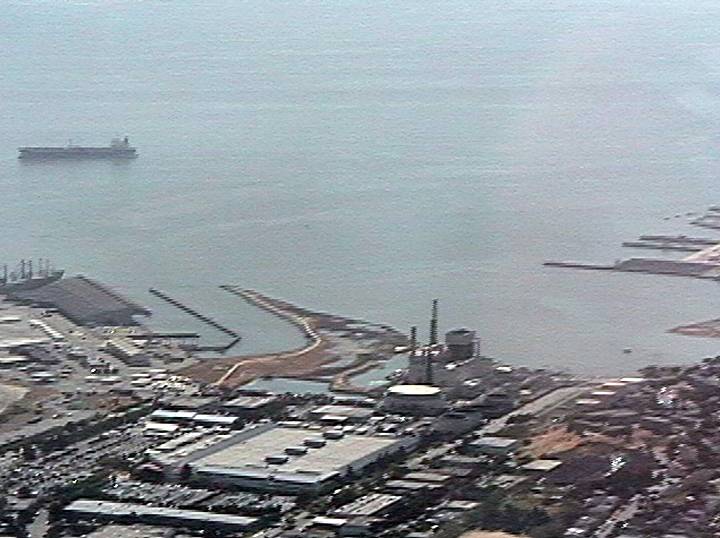