Filipinos in the Tenderloin 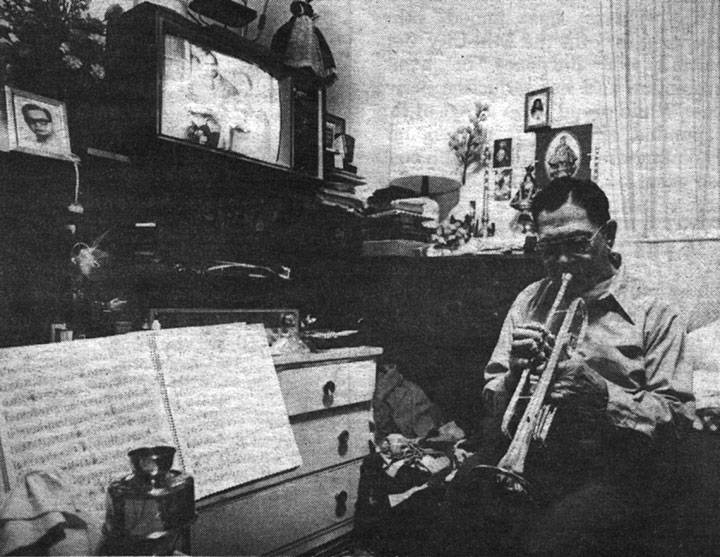 Eighty-six-year-old Guellmo Kidit sat on a stool in his cozy O'Farrell Street apartment beneath walls adorned with pictures of the Virgin Mary and remembered back to his early days in America. Arriving as a teenager from the Philippines in 1921, Kidit worked for the next 40 years as a cook for asparagus pickers in the Central Valley.

"It was hard work," he remembers. "I worked for 10 cents an hour or a dollar a day and would get up at 2 in the morning to bake a cake."

During the off season Kidit lived in a residential hotel on Kearny Street in San Francisco, moving from there 20 years ago to his current O'Farrell Street apartment. Today he joins hundreds of other Filipinos making the Tenderloin their home. Filipinos have been called the "silent minority" in multi-ethnic San Francisco, even though they outnumber other Asian groups in California.

In the Tenderloin they range from retired pensioners who have been here since the twenties to families and World War II veterans arriving in the last decade to apply for citizenship.

The recent dramatic events (the overthrow of dictator Ferdinand Marcos) in the Philippines have focused public attention on the island nation and the Bay Area's large Filipino population. Filipinos in San Francisco have traditionally lived in "Manilatown," a now-destroyed slice of Chinatown centered on Kearny Street, and the South of Market. But more and more are being forced into the Tenderloin because of soaring rents in other areas.

For many Filipinos, particularly the newer immigrants, the Tenderloin scene can be hard to adjust to.

"They're not used to the crime, the drinking, the type of people on the streets because they come from a more conservative environment," says Isabel Ugat, whose deceased husband was Filipino.

Others have no trouble fitting in. Tomas Zamola, a retired seaman, says: "The Tenderloin's alright—it's getting pretty good now. There's understanding between people, we get along together here."

Cecilia Balunset, 16, said the Tenderloin seemed "kind of scary at first—all those bums." But after meeting other youth at the Tenderloin Recreation Center she began to relax and feel more at home.

Filipinos have been arriving in this country in waves of immigration since the Philippines was colonized by the United States in 1898. After Japanese and Chinese laborers were excluded by law in the 1920's, Filipinos were recruited to take their place in Hawaiian sugar plantations and California's Central Valley.

During the Depression, fear and dislike of foreigners, including Filipinos, increased. One San Francisco Municipal Court judge, Sylvain Lazarus, commented in a 1936 case involving a Filipino:

"It is a dreadful thing when these Filipinos, scarcely more than savages, come to San Francisco, work for practically nothing, and obtain the society of these (white) girls. Because they work for nothing, decent white boys cannot get jobs."

A report by a Los Angeles Chamber of Commerce official in the 1930s denounced the Filipinos as "the most worthless, unscrupulous shiftless, diseased, semi-barbarians that ever came to our shores."

As nationals but not citizens, Filipinos were barred from certain professions, couldn't vote or own land, and had difficulty getting marriage licenses. California's 1901 anti-miscegenation law, amended in 1933 to include Filipinos, forbade racial intermarriage into the 1940's.

Ellis Street resident Tomas Zamola, a strapping, sturdy man in his late 70s, came to the U.S. in the '20s and worked as a sailor in the merchant marine.

During the off season—when they weren't working on merchant ships, in Alaskan canneries, or picking produce in California's fields—Zamola and hundreds of other Filipinos stayed in residential hotels in Manilatown, a lively, close-knit community whose businesses—cheap restaurants, barbershops, nightclubs and pool halls—catered to the needs of an overwhelmingly young and male population.

Felix Ocampo, who immigrated at the same time, spoke of good times living with his pals in Manilatown after leaving the service following World War II. "Those days I had a little money in my pocket and didn't care too much about working," he says.

Ocampo never married and Zamola met his wife late in life—just six years ago. "I consider myself lucky because I never married for a long time but then I met my wife in 1980," says Zamola. "Life's a gamble—sometimes you lose and sometimes you win."

Isabel Ugat, whose Filipino husband, now deceased, worked in San Francisco restaurants during the Depression, remembers the stories he used to tell her about those early days.

Even with college or business degrees, Filipinos were barred from most jobs in the city, except hotel and restaurant work, she says. And the Tenderloin was off limits as a place to live. "They would be turned down if they applied for a place," she says.

Ugat says that the laws forbidding intermarriage were particularly painful, dooming many men to a life of bachelorhood.

Only their camaraderie and sense of humor got them through, says Ugat. "My husband showed me a picture once of a tiny little car that 14 of them would pile into to go to dances or out to the country for a barbeque. They loved to get together to cook or gamble," she says.

Zamora says that there was discrimination against Filipinos during the Depression but he never let it bother him. "I was a happy-go-lucky type of guy. I could take it or leave it. If they don't like me, I don't care," he says.

Ugat's husband, like many other Filipinos, became active in the trade union movement, working to help organize Filipinos into the Hotel and Restaurant Union. Eventually people began to take the unions for granted, she says, but "my husband remembered before you had a union you didn't even eat right at work (because there were no breaks).

"Filipinos coming after the war didn't realize all the sacrifices people went through to get somewhere with the union," she says.

As work dried up during the Depression, Filipino immigration dropped off and stopped almost entirely after 1934 when a quota was set at 50 Filipinos a year.

After the Philippines obtained independence following World War II, immigration slowly picked up again as servicemen and their families came to the U.S. and became citizens.

The greatest influx of Filipinos has been since 1965 when the quota system was lifted. The Filipino population in the U.S. doubled as over 200,000 entered the U.S. during the next 10 years. In recent years, increasing numbers of urban professionals and skilled workers began to come, fleeing the political repression and stagnant economy back home. Many others enter the country illegally or overstay their visas, exposing themselves to run-ins with the immigration service.

In the last decade many families and retired veterans have arrived and squeezed into the cheap but small apartments and rooms of the Tenderloin.

Many families try to make ends meet by both parents working, sometimes at more than one job. The result can be that parents aren't able to spend enough time with their kids and troubles arise.

"We have seen some cases of neglect," says Ramone Calubaquib, youth director at Canon Kip. "The parents don't know what's happening with the kids at home, at school or on the street," he says.

Many Filipino youth in the Central City have dropped out of school or are in the verge of doing so. Teachers are less strict than in the Philippines and there's little guidance at home so kids turn to their peers for support. "If one drops out, everyone follows," says Calubaquib.

Gayle Justice, director of Canon Kip, says that the newly arrived youth get discouraged when they "see their parents, who were professionals back home, doing lower paid jobs here. They end up giving up," he says.

Other Filipino youth still try to aim high, but learn to use different routes than their classmates. Cecilia Balunset, 16, says that when she graduates from high school next year she plans to go into the military to finance college studies in photography.

Retired veterans seeking U.S. citizenship are also among the more recent arrivals. Like many of the 30 other Filipinos living in the William Penn Hotel on Eddy Street, Pastor Ramos, 72, fought with U.S. armed forces in World War II.

Ramos applied for citizenship in 1979 when he arrived in San Francisco but is discouraged by years of waiting.

Lina Fernandez, a social worker for the St. Francis Meals Program, says that the elderly Filipino vets awaiting citizenship is "a sad situation."

"They've been here for years. They say they've served the country during the war and feel they have to be given justice. The U.S. was looking for soldiers and they were ready to go," she says.

"I had to dig for my role models"

Filipinos have often been "neglected" as a group, says Ramone Calubaquib, because "we've always been pretty quiet and thus don't have the political muscle other communities have." One reason for this, he says, is that many of the single men who came over in the '20s and '30s didn't marry or form families until very late in life, if at all.

"Historically we haven't had the opportunity to develop our community by having families and family structures here," says Calubaquib.

Lumped together with Chinese and Japanese, the Filipinos' unique identity has often been overlooked, says Ed Illumin, a Filipino who works for the Human Rights Commission.

"I had to dig for my role models," says Illumin, who says that much of Filipino culture has become "Americanized" because of decades as a U.S. colony. As a kid, the people he looked up to were Filipino boxers and Victoria Mondalo, a South of Market-raised Filipina who won two gold medals in the 1952 Olympics.

Reactions of Tenderloin Filipinos to the ouster of Ferdinand Marcos were mixed. Most concurred that Marcos had been corrupt and that it was time for a change. But some weren't too sure about having a woman in charge.

"I hate Marcos—he took big money and stole from the Filipinos," says Kidit. "But a woman hasn't run the government before—what does she know?"

At the William Penn Hotel tenants didn't quite see eye to eye on the political situation back home. While Pastor Ramos felt it was "time for Marcos to step down and let the other side have a chance," fellow tenant Raymond Samonte worried that Aquino is a communist. But the disagreement remained friendly. "Here we just smile when we have differences" said Samonte. "Back in the Philippines (under Marcos) they would kill you for your political beliefs."

Many Filipinos are adopting a "wait and see" attitude, to see whether Aquino is able to come through with her promise of meaningful reform in the Philippines.

"All of us are happy that the dictator is gone," said lllumin. "But I don't let myself get fooled by what's going on there—there's still numbers of guerrillas in the mountains waiting to see if there's really going to be change."

But Emil DeGuzman, a Filipino who works at the Senior Escort Program, was clearly jubilant that the day that "many of us have worked for for over a dozen years" had arrived. The fact that Filipinos in America had the courage to demonstrate, lobby and picket has unified the community here, according to DeGuzman.

"Aquino's victory has given people a sense of the solidarity of the community here. It will give us the energy to continue on and fight other Issues such as the anti-immigration movement and racial discrimination," he said.