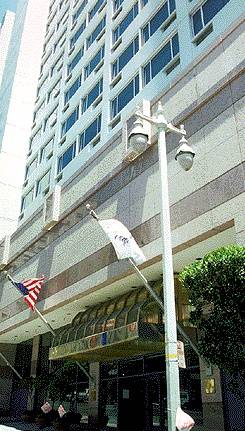 The Hilton stands imposingly across the street from Glide Memorial Church.

Joe Kaufman and other neighborhood activists formed committees to wage the fight against hotel conversions and the luxury hotels. They organized demonstrations and lobbied members of the Board of Supervisors and planning commission. When the projects came up for discussion at public hearings, residents packed the meetings, cheering as activists like Kaufman and Jean Mellor denounced the hotels, and booing as hotel lawyers discoursed on the planning code. The neighborhood's new newspaper, The Tenderloin Times, devoted extensive coverage to the fight against the hotels and brought the issue to the attention of Tenderloin residents.

In the end, the community campaign was unable to block the luxury hotels outright, but it did extract millions of dollars from the developers, money that was used to subsidize low-cost housing and fund community projects. At virtually the same time, the battle against hotel conversions was meeting with partial success: Neighborhood activists convinced the Board of Supervisors to pass a law banning the conversion of residential hotels to tourist use.

Both of these victories had significant flaws. By the time the anti-conversion ordinance passed in 1981, hundreds of units had already been lost. And even after the law's passage, city officials charged with implementing its provisions did little at first to enforce it. With sustained pressure, however, the ordinance helped protect the neighborhood's fragile stock of affordable housing.

In a similar vein, the mitigation measures agreed to by the developers of the new luxury hotels were unprecedented either locally or nationally. But the final accord was also a compromise, an accommodation to the power of the hotels and their allies in the pro-development administration of Mayor Dianne Feinstein. In truth, the neighborhood probably got as much out of the developers as it possibly could, given the political realities of the day.

The hotel struggle established the Planning Coalition as a neighborhood power and laid the foundations for an even more important battle. At the same time, however, the process of community organizing, negotiation, and compromise--coupled with the neighborhood's dependence on paid organizers and outside funding--established a pattern that would ultimately contribute to the unraveling of the neighborhood's political strength.