Not so long ago, San Francisco was home to about 100,000 Blacks, and the Fillmore district was a thriving Mecca of African American life. Today, the Fillmore is gone, wiped out by "Negro Removal" in the guise of "redevelopment," and the city's Black population has shrunk to 40,000. The last bastion of concentrated Black life, Hunters Point, is slated for ethnic cleansing designed to rob African Americans of not only a spectacular view of the Bay, but of any hope of remaining in the city.

"They want to kick you out so they can build housing they know you can't afford and allow rich San Franciscans to enjoy it. They don't feel that poor Blacks or other people of color deserve to have a view like that."
--Appolonia Jordan, San Francisco Bayview 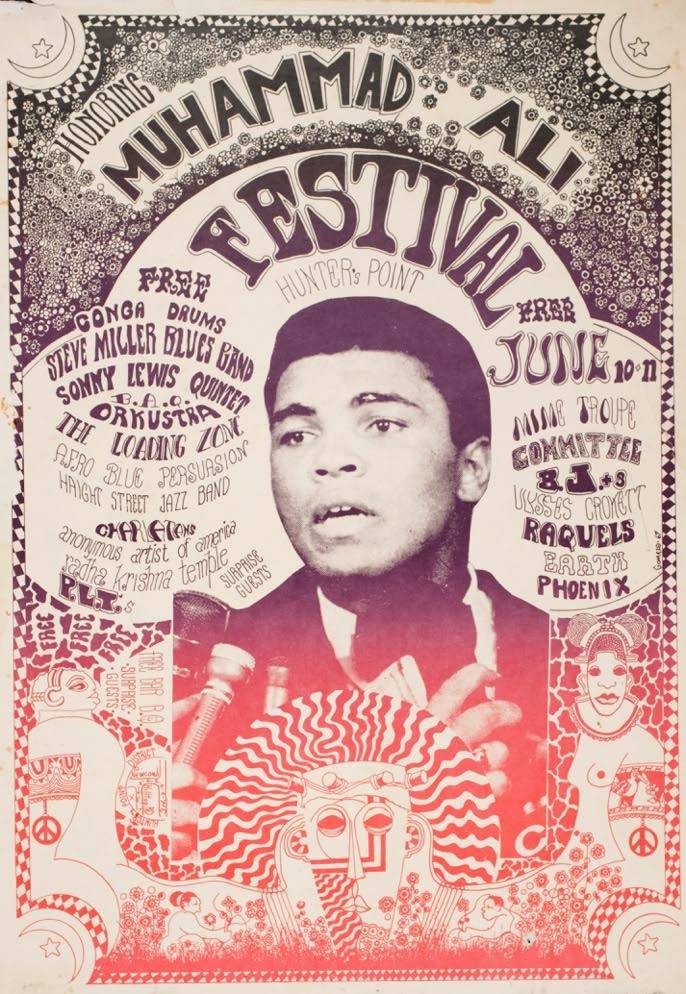 Poster from 1967 when Muhammad Ali, world heavyweight boxing champion who had relinquished his title when he became a draft resister and went to jail rather than going to Vietnam, was celebrated at a rock festival in Hunter's Point--a time when rock music was still enjoying a multiracial enthusiasm prior to its full immersion in the music business.

Alan Goodspeed was my next door neighbor in the Ingleside District on the south side of Ocean Avenue in San Francisco. He was a Black man from Marshall, Texas, who had moved to San Francisco during WWII and worked as a machinist for twenty five years in the shipyards of Hunters Point. Within that time, he bought a home and raised a family.

When Alan passed away a few years ago, working class Black people had already become an endangered species in San Francisco. According to a 2005 demographic study, there are probably less than 40,000 Black people left in the city. Back in the day when Alan and I changed the oil in our cars in adjoining driveways and jawed about whether Muhammad Ali would regain the title, there were almost 100,000 black people in San Francisco.

So, here in 2007, ethnic cleansing of the Black population in the city "where little cable cars climb halfway to the stars" is more than halfway to completion.

San Francisco native Darrell Rogers (b. 1945 in the Fillmore) describes his fraught relationship with the police. It starts out as a black child that just moved from the Fillmore to the Richmond where he is befriended by a white officer on horse patrol, but ends in a rather different place.

The Jobs at the Hunter's Point Ship Yards

By 1974, most the 8,500 jobs at the shipyards created during World War II were gone, and a decade later a petulant Navy scotched plans to homeport the nuclear-armed USS Missouri when City officials objected to footing the bill with no job guarantees for locals. The shipyards were closed, and the Navy pulled out, leaving forty years of highly toxic contaminants behind them, and a commitment to clean up their mess some time in the future.

Even as jobs at the shipyards were drying up, the Hunter's Point-Bayview neighborhood was a majority Black neighborhood, a vibrant community in southwestern San Francisco which was affordable and had spectacular views of San Francisco Bay. The slaughterhouses of "Butchertown" were gone, along with most of the auto wreckers, and although it was underserved and largely ignored by City officialdom (except for heavy-handed police presence), the neighborhood was hearth and home for thousands of Black Americans.

Fast forward twenty years from the Navy's retreat. San Francisco's housing dynamic has changed drastically. Home prices and rents have skyrocketed. A studio rents for $1,800 and a small condo fetches $650,000 to $800,000. The City's light industry has disappeared, and, while most of the dot commers dot come and dot gone, they were replaced by a new urban class of middle managers, hedge fund hustlers, fashion designers, bio-meds, money changers, paper brokers, and techies of all persuasions. Gentrification has metastasized throughout the City, spilling out of the central Victorian neighborhoods into the outlying frontiers, like Hunter's Point/Bayview.

Consequently, the public lands on which the shipyards once stood provided both lucrative opportunities for developers and desirable potential properties for the new yuppie class.

On the part of the shipyard now known as Parcel A, the bulldozers, scrapers and graders of the Lennar Corporation are hard at work, flattening a former hillside for new homes and condos. The original plan approved by the City included affordable rental units in the mix. However, those units have now been scrapped. Lennar reneged on the affordable housing part of the plan, claiming a lack of profitability.

Very few, if any, of the local residents will be able to afford the new residences and they will be forced out of this last corner of the City, as the prices go up around them. And, to add injury to insult, the asbestos dust being raised during construction is making the neighbors sick.

Dress Rehearsal in the Fillmore

To understand what's happening today at Hunter's Point, it is necessary to understand what happened in San Francisco's Fillmore District in the 1960's and 1970's. The Fillmore, often called the "Harlem of the West," was a center of Black culture in the decades following World War II. Like Tulsa in the early 1920's, the Fillmore was a flourishing home for thousands of Black people and hundreds of Black-owned markets, auto repair garages, barber shops, salons, restaurants, shoe repair shops, Laundromats, night clubs, and apparel stores. Among those businesses was the legendary Jimbo's Bop City, which featured performances by jazz immortals like Billie Holiday, Charlie Parker, Miles Davis, Dizzy Gillespie, and John Coltrane.

And then came something called Urban Renewal in the guise of a heavily-cloaked urban real estate operation called the Redevelopment Agency. When the RA was finished, the Fillmore was gone. The bulldozers had smashed and leveled block after block after block. The fabulous Fillmore looked like a bombed-out city in an old newsreel. And that's exactly what it was, displaced residents and all. The people who lived in the Fillmore were dispersed to the East Bay cities of Oakland, Richmond, and to Hunter's Point/Bayview. As the Redevelopment Agency smashed homes and businesses, it issued thousands of certificates of preference to the people of the Fillmore. These certificates were documents which gave the displaced businesses and families a promise of preference for renting or buying other redevelopment property within the City and the right to return to the neighborhood from which they'd been evicted.

Today, the Fillmore is almost completely gentrified. Much of the neighborhood has been condo-ized and yuppified, replete with foo-foo restaurants and ersatz jazz festivals. However, a pocket of Black families remain in the neighborhood with enough young Black men to be targeted for a gang injunction from the City Attorney.

The onslaught to quickly privatize the shipyards property [moved ahead under Mayor Newsom] regardless of the health of the residents during construction on this toxic site, or the fact that no one in the neighborhood will ever be able to live in the new housing units. In 2006, Lennar Corporation was cited multiple times for failing to monitor and control asbestos dust during the grading phase on Parcel A. Oddly enough, the project was never shut down to correct any non-compliant operations. Finally, several local African American neighborhood organizations went to City Hall [in 2007] to protest this continuing contamination and request that the City red tag the site until safety measures could be enforced. Their request fell upon deaf ears.

Meanwhile, the AWDG [All White Downtown Gang], not content with securing a financial stranglehold on future development of public lands, continues to target existing public housing for privatization.

The situation at Hunter's View, a public housing project in the Hunter's Point/Bayview neighborhood with a scenic view of the Bay Bridge and the Bay, is a classic case of how politicians, developers, and financial interests work together to achieve their respective ends of power and profit at the expense of people. In 1997, a grandmother and five children burned to death in Hunter's View because the smoke detectors didn't work. A recent inspection - ten years later - found that 64% of the units still had non functioning smoke detectors and pockets of sewage bubble up in and around these rat-infested homes.

Do you think City Hall rushed plumbers, carpenters and electricians out there to fix things up? Go sit in the corner if you answered in the affirmative.

Here's how privatization for profit works: first) don't maintain anything, let everything deteriorate; second) throw up your hands in dismay of ever being able to repair anything with the meager public funds available; third) call in private developers and their bankers to "help out"; fourth) evict the residents because by now everything has to be torn down, and fifth) build units to buy, not to rent, that the evicted residents can't afford.

"Do you think that the snail's pace rebuild of the infrastructure and return of the displaced residents of New Orleans is accidental?"

When the Federal government purposely abandoned the "inner cities" of Urban America almost thirty years ago, the vacuum left in its wake created vast and lucrative investment opportunities for the exploitation of public property.

In response to a Chronicle series about the dire living situation at Hunter's View, Pelosi, whose nephew Laurence has worked for both Lennar and Newsom, announced that the Democrats had not only increased funding for public housing, but that their $1 million allotment for Hunter's View would create "one-for-one replacement of 267 public housing units" with "new affordable rental units," and "market rate homes."