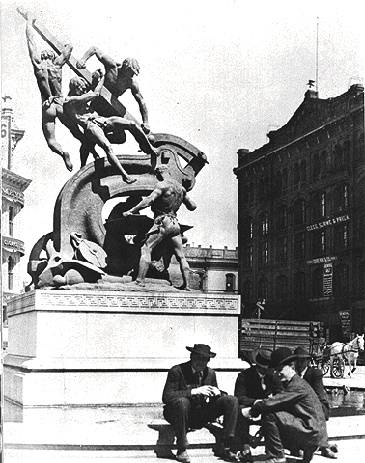 Memorial to Peter Donohue, founder of the Union Iron Works, installed at Battery and Market, shown here in 1904.

In the late-nineteenth and early-twentieth century, the formation of labor and business associations became more common and accepted in the general public. In February of 1901, the Sailors' Union of the Pacific, the longshoremen's union and the Teamsters' Local Union 85 united to form the City Front Federation -- a significant block of the working class that could effectively shut down San Francisco if it called for a strike. In response, fifty or so San Francisco businesses got together two months later with the objective of making San Francisco an open-shop city. Thus the potential arose for a significant conflict between capital and labor.

The nascent employers' Association got a chance to flex some muscle when a small metal polishers' union went on strike in April, 1901, demanding an eight-hour work day.

On May 1st of 1901, typically a time of much labor agitation in San Francisco, the Cooks' and Waiters' Union struck, demanding one day of rest per week, a ten-hour work day and a union shop for all restaurants in the city. The Carriage Makers' Union went on strike as well. The Carriage Makers' Association originally agreed to meet the demands of the union, but recanted when the Employers' Association threatened to cut off supplies. Essentially, it got caught in the middle.

As the strike continued, there was much agitation in the working class, and the bakers' union went on sympathy strike to show solidarity with the cooks' and waiters' unions. The International Machinists' Union, which had intended to strike on Mayday but didn't quite have its act together, initiated a nationwide strike on May 20, which added 4,000 to 5,000 more men to 2,000 already on strike in San Francisco. The National Metal Trades' Association decided to play hard-ball with the union at the national level, which set the stage for a prolonged confrontation.

In spite of a settlement between the Carriage Makers' Union and Carriage Makers' Association (forced by the Teamsters), the seeds of a significant capital-labor conflict had been planted. The stakes rose when the Epworth League had its meeting in San Francisco and the Teamsters refused to let their members handle baggage. The Draymen's Association, under pressure from the Employers' Association, systematically locked out their workers when they refused to move the bags. In response, the Teamsters called for a total walk-out by their members.

The Employers' Association would neither negotiate directly with the unions or reveal who their constituent members were. The businesses were likely to suffer a boycott if the labor-sympathetic public found out what businesses constituted the organization. Any information on the faceless entity was generally dredged up by the San Francisco Examiner's staff of high-paid muckrakers. According to the Examiner, the Association's more active members included Cahn & Nickelburg, John Rapp & Son, Levi Strauss and Neustadter Bros, and the Emporium.

In late July, 1901, sailors, longshoremen and marine firemen went on strike as well, effectively shutting down the San Francisco harbor. The Employers' Association desperately began searching for strikebreakers, bringing in workers from the interior of the United States as well as hiring Navy men returning from the Philippines. Mayor James Phelan played intermediary, being the only party the Association would talk to. Unfortunately, the demands of both sides were somewhat hazy; it seemed resolution was all but impossible. Meanwhile some 200 ships had piled up in San Francisco harbor. The Chamber of Commerce and the Merchants' Association offered support to the Employers' Association, and the city began protecting strikebreakers from union harassment.

Ultimately, California Governor Gage was forced to intercede to resolve the conflict. None too pleased with the conduct of the Employers' Association, Governor Gage merely threatened to put San Francisco under martial law until an agreement was reached. The conflict was resolved immediately.

In the end, neither labor nor capital was the clear victor of the Strike of 1901, but the workers fared better. Union members returned to work, toiling alongside non-union members. The Employers' Association was rendered impotent and industrial relations became relatively harmonious again.