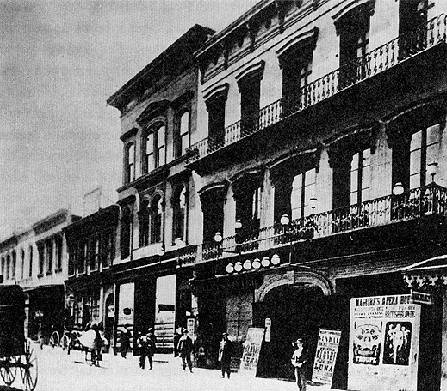 There is no record about Spanish performances other than choirs and weddings, but they may have occurred, especially as the population of the area grew in the period of Mexican control. American soldiers were sent in 1847 and apparently they began giving plays "almost at once."(1)

The earliest recorded theater in California is Sacramento's "Eagle Theater," which was assembled in October of 1849 out of packing crates (the stage), canvas (the walls) and some tin (the roof). San Francisco was a relative late-comer in terms of building a theater, but several impromptu theaters were created. The first recorded performance was on June 22, 1848, was a series of songs and comic impressions by Stephen Masset, a part-time lawyer and journalist performing as "Jeems Pipes of Pipesville."(2) The first year of the gold rush saw a circus and several minstrel shows.

Also in 1850, a bartender and hacks driver from New York City, Tom Maguire, opened an 800-seat theater called the Jenny Lind on October 30th. The rowdy populace of booming San Francisco embraced the theater at a time when the rest of the country viewed it with moral disdain, and Maguire's establishment was popular from the start. Although its owner was illiterate and profoundly ignorant of the stage, presentations of King Lear and Hamlet were as popular as more mundane fare such as burlesque and minstrels. It's been estimated that between 1850 and 1859 there were more than 1,100 different pieces performed in the city, which averages about 110 new productions each year. "Since touring companies were still unknown and each play was cast and rehearsed here, San Francisco emerged as an important independent producing center." ("The Theater of the Gold Rush Decade in San Francisco," 1935, Joseph Gaer). In contrast to the theater companies, actors did tour the country, so the city saw many famous performers, including Junius Brutus Booth (brother of Lincoln's assassin).

By 1865 the booming theater business--which had always been covered in the city's papers--spawned The Daily Dramatic Chronicle (later known simply as the San Francisco Chronicle, and one of two--sort-of papers to exist in the 1990s). Started by Charles and Gustavus deYoung for the princely investment of twenty-five dollars (premiere issue was January 16), it promised to cover "the actions, intentions, sayings, doings, movements, successes, failures, oddities, perceptions and speculations of us poor mortals here below."

In 1876 The Baldwin Theater opened on Market Street, and by 1877 Maguire was the manager of the place. It is here that we meet Salmi Morse and "The Passion."