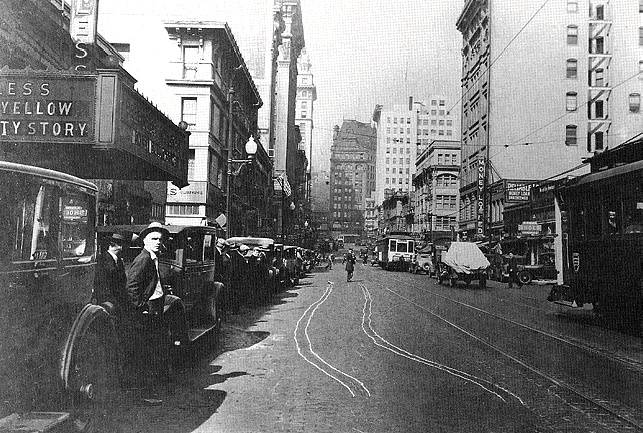 Looking north up 3rd Street from about Howard towards Market in distance, c. 1921. 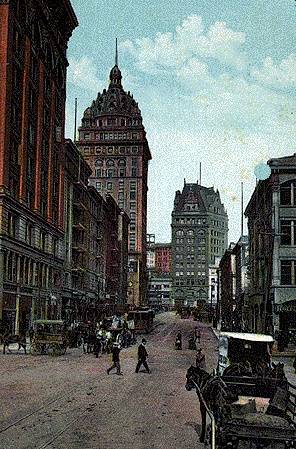 3rd Street in 1888 looking towards Market; Call Building on the left, center. 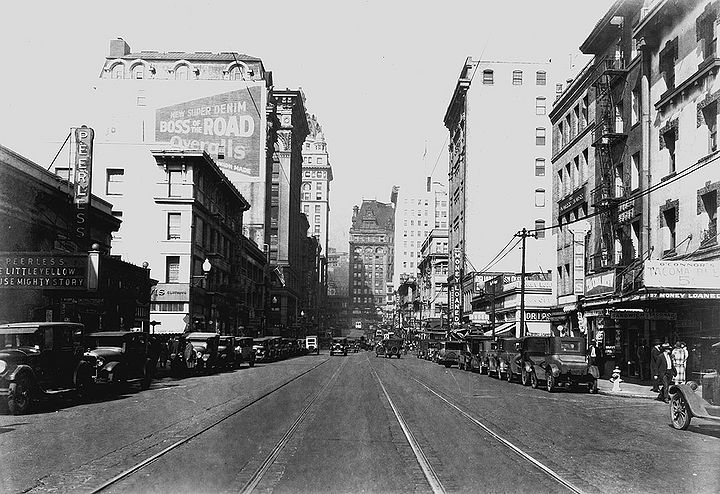 Third Street north towards Market from between Mission and Howard, 1926.

In this neighborhood of tarry smells and metalworking noise, worker housing filled every nook and cranny, and those who could afford to lived elsewhere. This pattern became evident about 1860, according to a census sampling from the blocks on both sides of Mission Street between Second and Third. Families lived there. Of the 75 households, 63 were headed by husband and wife, and two more by widows. There were only 34 children. Six families had live-in servants, but 25 households included boarders. Seventeen owned some real estate, usually their homes.

Only three names in this 1860 census sample are familiar. Simon Koshland was a wool merchant whose grandson became president of Levi Strauss. Dr. R. Beverly Cole, member of the city's Board of Supervisors, later served as president of the local medical association and as head of the University of California medical school. Neither Koshland nor Cole owned real estate. Michael Skelly was an energetic proprietor of the Omnibus transit line and later superintendent of the North Beach and Mission line. None of these families stayed here very long.

Many more residents were found on Jessie Street. Their economic status averaged lower than those of the families on Mission and Third. There were laborers Thomas Graham, Daniel Leonard, and Michael Hanna. David Roy was a carpenter and his fourteen-year-old son, a printer. John Clough was a blacksmith; Michael McCourt, a plasterer; Thomas Thomson, an artesian well borer; John Nelson, an upholsterer; Horatio Cross, a miner; William Quick, a machinist; Herman Ickelheimer, a special policeman and painter; and widow Elizabeth Denoe was a dressmaker. Two residents were part-owners of bottling factories. Patrick McCarty had no work.

"Waterman" Thomas Clary lived at the corner of two inner streets. His occupation, long obsolete in this country, probably consisted of selling water from a cart to households unconnected to any central water supply or well. The need for such a service is demonstrated by the dates when water company records show their pipes were first connected to households on the east side of Third Street between Mission and Howard. The earliest connection was not made until September 1861. Two households were connected in 1862, one in 1863, four in 1864, and two more in the rest of the 1860s. In the 1870s four new connections were made, and eight in the 1880s. Of the thirty households, eight were connected to the water company as late as the 1890s, although some buildings had been constructed on this block before 1852.

Commercial services to the residents concentrated at corners and on Third Street. Most shopkeepers lived in, behind, or over their establishments, and the 1860 census records give a clue to the kinds of stores to be found. Michael Doyle's saloon was at Third and Mission, and in the same building his landlord Thomas Vizard, a shoemaker, crafted new footwear and repaired old. Opposite was Lottie Popper's dry goods store. There were Frank Uhle's Queen City Market, John Cammett's New York Bakery and Restaurant, Michael Fagan's Empire Soda Works, A.T. Ladd's feed store, Mrs. Jeannette Harding's boardinghouse, and Binnis Marks's clothing store. Combined grocery and liquor stores were at the corners of Third and Jessie, and Mission and Annie. Typically of nineteenth-century cities, residential, commercial, and industrial uses were all mixed together.

By 1866 Dr. Levi C. Lane, who was to found Cooper Medical College, the parent of Stanford Medical School, had established his office and residence a few doors west of the California Historical Society site. His office moved to the site itself in 1876, sharing with Dr. Richard H. Plummer, the school's anatomy professor, until 1899.