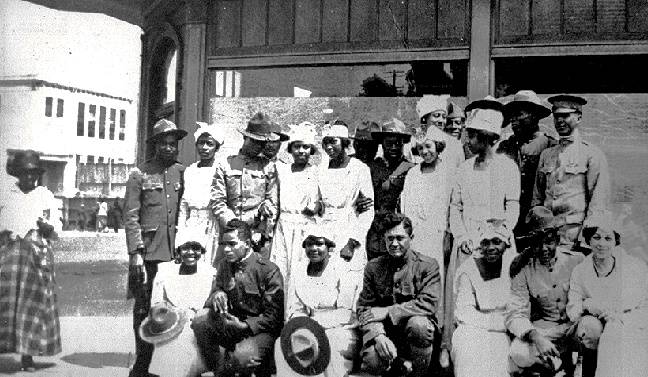 The level of African-American political organizing rose and fell over the years in San Francisco. In the 1850s, black San Franciscans formed the SF Executive Committee, which was the earliest black organization to fight for civil rights, including the right to testify in court, attend public schools, and to vote. The Franchise League was formed in 1852 to seek the vote for blacks, although it wasn't until the 15th Amendment to the constitution in 1869 that they were granted the franchise. In 1862, a black resident complained about the "Jim Crow Exhibition and Negro Extravaganzas" that occurred nightly in the city. "Pernicious men" staged these shows "at the expense of the poverty and ignorance of an oppressed, long-outraged and down-trodden people."

The Palace Hotel, a haven of black employment, kicked out black workers en masse in the late 1880s after pressure from white unions. Nevertheless, San Francisco's diversity dates to its origins. Black involvement in the sex, leisure, and boarding-house and gaming industries all promoted a racial intermingling in life's private spaces. Many early black arrivals first found housing available in Chinatown, where the Chinese did not discriminate. Others took Spanish surnames and feigned accents to "pass" as white, an often successful strategy.

San Francisco started with segregated schools, the black school being in a dingy church basement at Jackson and Virginia. A lawsuit brought to the California Supreme Court in 1872 established the doctrine of "separate but equal" that the US Supreme Court adopted 22 years later. But under pressure from blacks and whites the SF Board of Education abolished racially separate schools as a cost-cutting measure in 1875. (Racially segregated schools came under court ordered desegregation in the 1970s as the result of a long-running lawsuit against the current school district.)

In 1891 the Afro-American League of San Francisco began with 150 members at a public meeting, but it grew ineffectual within a few years. In 1895 a state-wide organization of local Afro-American Leagues was launched but it was also short-lived. By 1915 the National Association for the Advancement of Colored People (NAACP) had established a chapter in San Francisco. Other groups included the Negro Equity League, the Negro Welfare League, and the Equal Rights League. These groups led a vocal public campaign against the movie Birth of a Nation throughout the late 1910s, until Mayor Rolph and the Board of Supervisors moved unsuccessfully to ban the film. In 1921 the movie was temporarily withdrawn from California but reappeared again in 1930.

Marcus Garvey's Universal Negro Improvement Association grew from 100 to 500 members from 1922 to 1924, making inroads with poorer blacks where the NAACP hadn't succeeded. The black press of the time was generally hostile:

The Western Appeal wrote that Garveyism accomplished "absolutely nothing, outside of collecting a lot of money from a number of unthoughtful dupes, and squandering the same." The editor urged readers to "do away with all fly-by-night or daydreams of migrating to Africa" and instead "put our money to working in cooperative businesses." With the imprisonment and eventual deportation of Marcus Garvey, his appeal to race, self-sufficiency and black nationalism went with him. The San Francisco chapter of UNIA faded and by 1928 was moribund.

The Booker T. Washington Community Center grew out of the WWI Victory Club, a facility for black soldiers. It became a multi-purpose organization with a wider scope by the 1920s. Black young men engaged in boxing, basketball, industrial crafts, and the centers' social clubs. Young women found chances to sing, dance, sew, etc. The Negro Dramatics Club, as well as card games for seniors, added to the activities. Also, informal gatherings, debates and public lectures were frequently held.

Black San Francisco by A. Broussard