Note: This is a slightly revised and excerpted version of a document prepared in support of the application by the Dogpatch neighbors to receive historical district status.

Further evidence of the establishment of Dogpatch as a distinct community include the establishment of several churches in what is now Dogpatch including the Kentucky Street Methodist Episcopal Church, Olivet Presbyterian Church and what would eventually become St. Teresa’s Catholic Church. Dogpatch received its first religious institution in 1869 when a congregation of seventeen Scottish ironworkers employed by Pacific Rolling Mills, built a small church on Tennessee Street. When the church burned in 1877, a new one was built on Mississippi Street, closer to the Scottish settlement on Connecticut Street, near the crest of Potrero Hill.[47] The 1871 San Francisco City Directory indicates that the original Kentucky Street Methodist Episcopal Church was built on a donated 60’ x 100’ lot on the corner of Michigan and Sierra Streets. By 1881 Pastor David Seal moved the church its present site on the “west side of Tennessee Street, between Butte and Solano.” The church remained in operation at this address, ministering to native-born English-speaking shipyard workers. However, the demographics of Dogpatch changed as Irish-born residents from Irish Hill and the South of Market moved into what had been a primarily native-born district and by 1900 the congregation had shrunk to a small number. The last listing for the Potrero Methodist Episcopal Church occurred in the 1904 San Francisco City Directory.[48]

Potrero Point received its first regular Catholic services in the 1860s, when Catholic priests from St. Peter’s began coming to celebrate Mass in the dining room of the dining room of the Breslin Hotel in Irish Hill. In 1880 Archbishop Patrick Riordan decided to establish a new parish in the Potrero district, calling it St Teresa after St. Teresa of Avila. Father John Kenny was appointed the first pastor and a warehouse was converted into a church with three alters and a confessional. However, it would not be until 1892 that Dogpatch would get its own Catholic church when Father Patrick O’Connell built St. Theresa’s Church on the northeast corner of Tennessee and 19th Streets, currently the site of a metal warehouse at 699 Tennessee. Following the 1906 earthquake, Father O’Connell decided to build a school for the neighborhood’s increased Catholic population. The Sisters of the Presentation began work in 1912 and by October of that year they had established a school with over 100 students. After the demolition of Irish Hill during the First World War, the Irish Catholic population of Potrero Point diminished significantly. This factor, combined with encroaching industry, compelled the parish to move St. Teresa’s to the top of Potrero Hill. In 1924 movers cut the building in two and moved each part independently to its present location at the northeast corner of 19th and Connecticut Streets.[49] 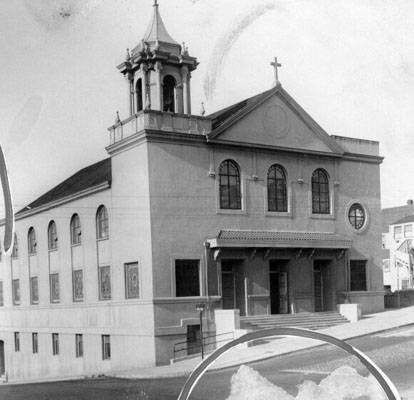