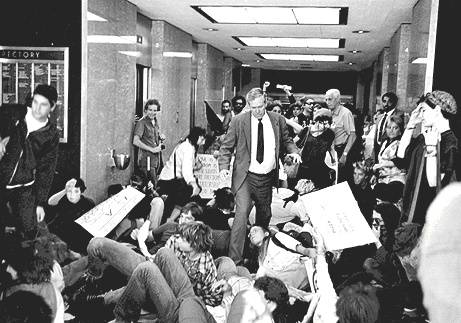 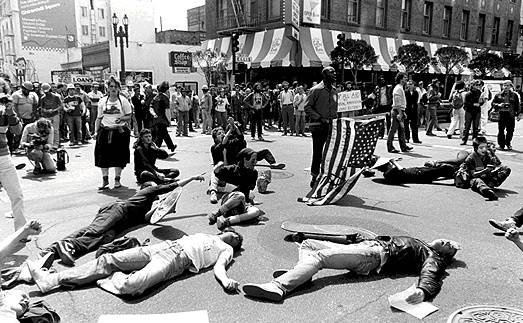 In the spring of '84, a group of activist punks had organized two street theater action "tours" of corporations involved in nuclear weapons and military intervention. On April 15th and again on May 22,100-200 people moved through the Financial District stopping at corporations involved in nuclear weapons and intervention in Central America. After gathering at Justin Herman Plaza the group actually entered into the lobby or bank of the corporation, a "tour guide" would announce how the corporation was involved in the war industry, and the whole group would "die-in"-- drop to the ground screaming and lay there, dramatizing the effects of militarism. Bechtel executives had to step over our bodies to leave their building. Wells Fargo customers continued to stand in line amongst our corpses, as deposit forms were thrown into the air like confetti. At Bank of America world headquarters we completely disrupted the ground floor and occupied the balcony surrounding the bank for half an hour chanting "hey, hey B of A, how many people did ya kill today", as their baffled security looked on with dismay.

These actions brought the Bay Area punk community into the streets. The Bay Area was home to one of the most creative and politicized punk cultural uprisings in the country, but punk politics had not yet taken a collective form outside of bands, underground shows and 'zines. I was part of an affinity group (a small group of friends who participate in direct actions together) of people from the punk scene who were participating in the anti-nuclear direct action movement.