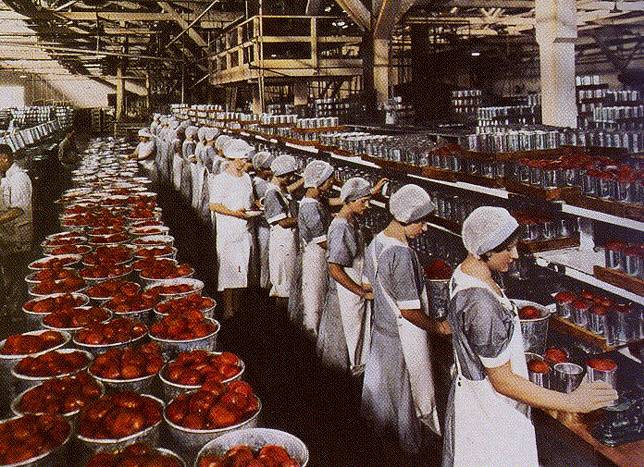 Del Monte Foods has its roots in the hundreds of small packers that sprang up around California in the 19th century. Turmoil followed industrialization in American economy of the 1890s, the food industry included. The depression and rock-bottom wages of the era led to poor sales and "overproduction." Competition among small growers and distributors destroyed many. Small canners, always pressed to meet loan payments, often unloaded their whole pack in the weeks following a harvest. Successful canners moved to reduce competition through consolidation.

In June of 1899 eighteen companies, half of all canning capacity in California, formed the California Fruit Canners Association. Visitors to San Francisco can still tour what was once the Association's largest peach cannery, now The Cannery shopping plaza along the city's northern waterfront.

Consolidation had swept other industries, too. The west coast fish packing industry concentrated itself in the Alaska Packers Association in 1893. Griffin & Skelley had grown from a single cannery in Riverside into the largest packer in Southern California. Brothers J.K., Jr. and George Armsby led the formation of the Central California Canneries in 1901, and became the West's largest preserved foods distributor. Though these companies operated facilities all over the West, each maintained headquarters within a block of each other on lower California Street in San Francisco.

On October 16, 1916, these four companies merged to form the California Packing Corporation (Calpak). Calpak consolidated its headquarters operations at 101 California Street. Today, Del Monte Foods headquarters is located a short walk away, at One Market Plaza.

On April 21, 1917, the Saturday Evening Post carried a full page ad over the signature of California Packing Corporation. It read, simply, "California's finest fruits and vegetables are packed under the Del Monte brand." Thus began a campaign that made marketing history by boosting brand recognition nationwide. Calpak pitched the Del Monte shield as a guarantee of value and "extra quality."

Calpak diversified into new products, most notably pineapple. Calpak acquired the Hawaiian Islands Packing Company in 1917, and soon after opened ranches and plants in Haiti and the Philippines.

By 1948, per capita consumption of canned fruits and vegetables had risen 50% from a decade before. Calpak consolidated its San Francisco operations into a new headquarters building at 215 Fremont Street.

The phenomenal sales of Del Monte Pineapple-Grapefruit drink, introduced in 1956, led Calpak to introduce more new drinks. Calpak opened a research facility in Walnut Creek that churned out new snack foods and brand names at a dizzying pace, e.g. Granny Goose "fun foods," the Grand Tour line of frozen gourmet foods, and single serving "Pudding Cups." [Granny Goose closed in early 2000 when no buyers could be found for it.]

In June of 1967 Calpak officially renamed itself the Del Monte Corporation. After several changes in ownership, Del Monte Foods is today the largest food company operating under a single brand name, so it is especially conscious of the quality that goes behind that name. Every year, 2.5 billion cans of fruits and vegetables are packed and sold by Del Monte Foods. But the corporate successes of Del Monte has done nothing to address the underlying insanity of the food system in modern America.