THE SAN FRANCISCO CLUB FOR THE DEAF — discovered by OFFS' manager Robert Hanrahan on a walk to La Cumbre for a burrito in the Mission District. Spotted sign — "HALL FOR RENT." Went up the stairs & wrote notes back & forth to 2 men sitting at a table in the back: RENT $50 A NIGHT, etc. 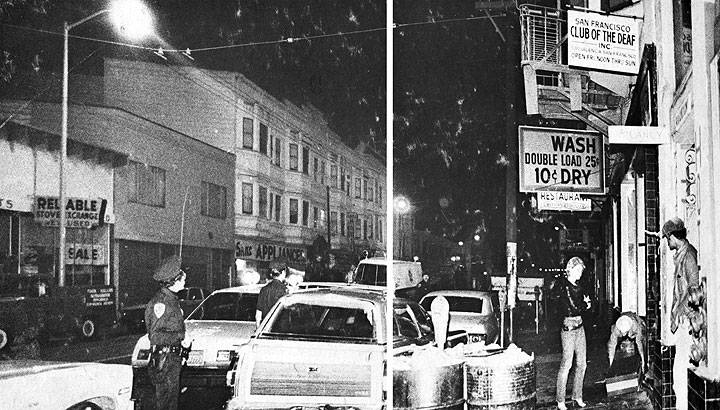 FIRST PARTY: Saturday Night, 9 December 1978 with the OFFS, MUTANTS & ON THE RAG (later known as NOH MERCY). $2 admission. Cheap Shure PA with 4 vertical columns one foot wide. No stage lights, almost no stage. You had to scrawl a note to order a beer. Outside, a blue-and-white. cop car made a quick u-turn & pulled up when DeeDee Morin staged a fake yelling fight with some guy who stumbled over her legs — the cops came up the stairs, looked around, then left (the first of many such visits). Music continued. Debbie Dub cut her .foot badly on broken glass, left a bloody trail to the women' s bathroom... Ricky (SLEEPERS) passed out in a car outside while his girlfriend Kristi eats a burrito with Cindy Crayon a few doors from the club. Olga showing color xeroxes of VS. in a Bart Station & a motorcycle shop. . . . Lots of hand signals between old & young club members. dark & very crowded with everyone who’d heard....your typical night at the DEAF CLUB. 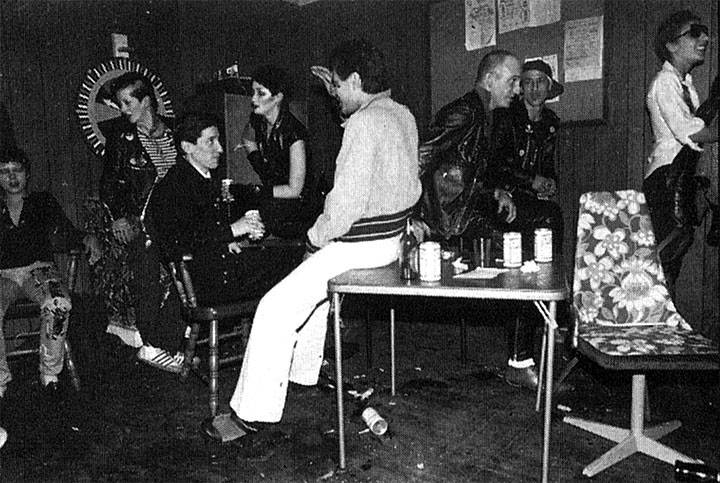 Inside the Deaf Club.

By remaining essentially unadvertised (except for posters by Chris Olson & many others), the DEAF CLUB stayed underground through its sporadic existence throughout 1979. The weekend punk-imitators didn't get the chance to take over — the main problem was neighborhood chicanos who resented what they considered a "punk invasion" of their territory — like one night 3 young machos gangbusted up the stairs & immediately started slugging men & women alike until they were finally forced out by sheer numbers of a surprised/rallied crowd just drinking & dancing...

Repeated police crackdowms forced temporary closures — neighboring residents had made numerous noise complaints, and the sound was definitely LOUD in the small junky hotelrooms next door. There were a'Ways rumours of imminent soundproofing.

There were film showings, performance art events, and parties such as on June 9 when Bruce Conner (head) threw a free one with a $1000 film award from Brandeis University. ZEV played his noise machines in the middle of the floor, then RALPH a honky-tonk pianist from Florida was booed, then SNUKY & HIS ALTER BOYS (impromptu act), the BLOWDRIERS, PINK SECTION, FLIPPER (2 songs) & the MUTANTS.

The DEAF CLUB closed after the WESTERN FRONT, a September-October festival of West Coast Bands, which went underreported. As Biafra said, "The magic of the DEAF CLUB was its intimate sweaty atmosphere, kind of like a great big house party. The club remained raw to the very end. 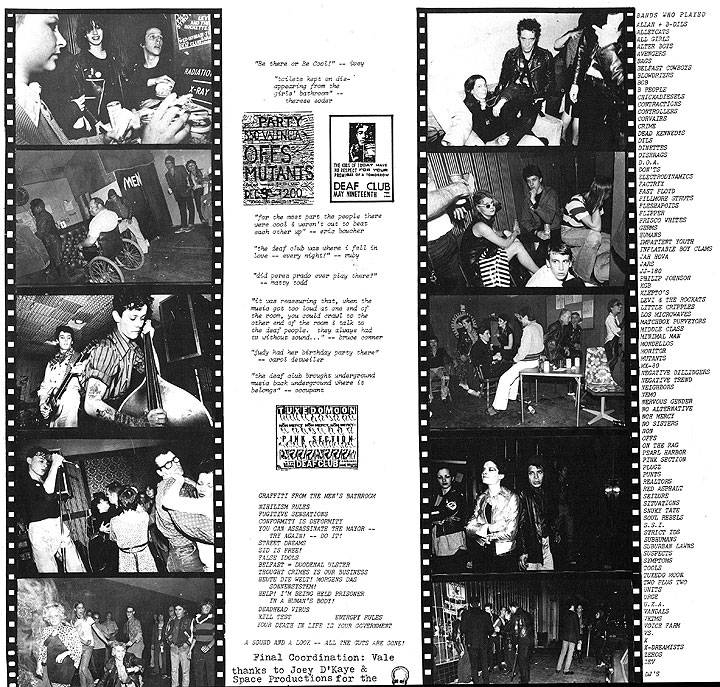 Liner notes from "Live at the Deaf Club" album.

The following interviews were originally published as Chapter 10: “No One's Listening,” in Gimme Something Better: The Profound, Progressive, and Occasionally Pointless History of Bay Area Punk from Dead Kennedys to Green Day, by Jack Boulware & Silke Tudor

Penelope Houston: When you went in, you wrote down your drink order and handed it over the bar. It must have been some kind of nonprofit, 'cause most of us were under 21. They never carded. The Mabuhay was the mainstay, but the Deaf Club, that was Robert Hanrahan.

Robert Hanrahan: I bought a burrito at La Cumbre and noticed a sign on the fire escape across the street. It said "Hall for Rent." I went up the flights of stairs and saw two guys watching TV with the sound off. After a very short while, I realized we weren't going to communicate, so I wrote on a piece of paper that I wanted to rent the place. Bill—I never knew his last name-was a mustachioed, lascivious, cigar-chewing character who apparently was in charge. He wrote "OK & $250," so I wrote "OK."

I rented a P.A. system from the company I worked for, and booked my favorite bands: the Offs, Mutants and On the Rag, who later became Noh Mercy, for the first show.

Penelope Houston: It was kind of amazing. I think they were dancing to the vibrations. The deaf people were amused that all these punks wanted to come in and rent their room and have these shows.

Robert Hanrahan: The social aspect of being able to participate and be accepted was big for the deaf people. They enjoyed being exposed to a different subculture like their own. It was very convivial, no fights or hassles.

Winston Smith: They put their hands on the table and they could hear the music. It was music they could appreciate because it was so loud.

Johnnie Walker: I was in my little corner with my mobile disco rig. We transformed the place, had it packed full of punks going crazy, bands coming up from Los Angeles, stage diving into the audience, the floor was bouncing up and down. You had mayhem at one end of the club, and all these deaf people at the other drinking beer and signing to each other, grinning all over their faces, because they absolutely adored it. They had all the atmosphere, but they didn't have to hear the music. 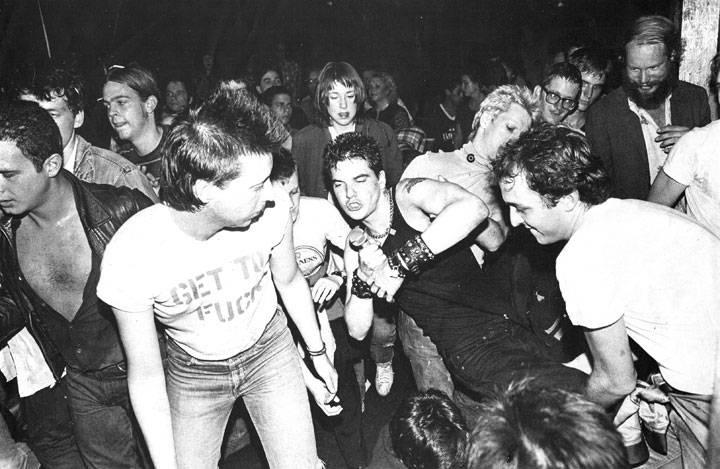 Deaf Club, 1978. According to MoFo: "Th[is] shot is from early '78, and SLAMMING was invented the SAME-night of the Germs Deaf-club show, but across town at Kezar, at the Clash/Cramps/DK's show. The night started off with pogo'ing, and ended with slam-dancing, as created by the skateboard=punks who were up in the city from San Jose, where there was a huge HESTER SERIES pro-competition at Winchester Skatepark, in Campbell/LosGatos, area. After that show, we all went to the Deaf club for the Western Front show. Jello was there with us, in a full-body cover-alls. His clothes got ripped off of him at the Clash show, when he was onstage.

Rail Farrell: Any other club at the time, people would be snotty because it was either trendy, or because they just didn't give a fuck. What was very unique about the Deaf Club is that the people who ran it were the friendliest people imaginable. I think I saw the Butthole Surfers there on their first time playing in San Francisco.

Robert Hanrahan: In the early days, the commander of the Mission precinct sent a patrol officer to the Deaf Club. He told me that we had their cooperation, as the "punks were changing the face of the neighborhood and appeared to be bringing the crime rate down." But he said if I fucked up he would unleash a shitstorm and close it down. "Understood?" was his next word. And with that I was escorted out to the street by the patrol officer and walked back. Sometimes younger cops would drop in to ask about learning to pogo with the real intention of meeting those "loose and wild" punk women.

Jennifer Blowdryer: It was on Valencia. I remember Russell got queerbashed pretty badly near there, and someone else got stabbed. When there's a new area it seems like some blood gets shed, initially.

Robert Hanrahan: There was one invasion by cholos near the end of the club's life. The attackers were beaten back down the stairs and out onto the street by the audience. There was also the murder of a transient who apparently was f]ung out through one of the fire escape doors in the upper floors of the hotel and sailed over the heads of Thrasher magazine's Enrico Chandoha and Matty Todd from Pink Section. Matty went into the club and asked me to come outside to talk with the cops, who arrived with paramedics, who waited patiently for the guy to die. While the cop and I were talking, this couple walked over into the street and the guy began to sift his hands through the blood from the transient's head, that was pooling up on the street.

Jennifer Blowdryer: I had this thick Rhode Island accent and I was mean as a snake. I didn't like the fact that I'd been a reject all my life. I would always be tanked. I used to carry a bottle of Seagrams 7. And then people were kissing my ass 'cause I was in a band. I remember Sally Mutant was backstage, and Timmy said I said, "You've got two short little legs, why don't you walk away on 'em?" People would come up to me years later and be like, "You really upset my friend at the Deaf Club."

Rozz Rezabek: Everybody would end up drinking Bud, because it was the only thing you could order with the deaf people. You'd try and do sign language. But then if you mouthed the word "BUD" they'd understand. That's all anybody ever drank, was Budwelser.

Larry Livermore: The building was old and a little bit shaky. The whole place would move with the drums and the sound of the music, and people stumbling around and jumping around.

Rozz Rezabek: This couple named Joel and Mimi lived next door. The window from their fire escape faced the backstage room. When bands were there, Joel and Mimi would just charge people a buck to come through. People would be crawling through the window into the dressing room. In and out, all night long.

Jennifer Blowdryer: Now you think of people who are so-called handicapped, there's supposed to be this liberalization of using language as if no one's different, but they're actually more protected and segregated now. It wasn't like the deaf people must be separate or something. They were just down and drinking and having as good a time as anybody. They were drinkers, those deaf people. Oh yeah.

Sammytown: They closed it down 'cause pogoing was big, and they were afraid the floor would collapse.

Robert Hanrahan: The deaf community supported the club to the end. Bruce Conner had the last unofficial show there, a private affair that was paid for with an award he received.

Dennis Kernohan: The deaf people there with balloons, holding them up and feeling the vibrations of the balloons to the Germs, all these fuckin' great bands, and using these balloons and dancing around. For a tough old punk, it just made your heart-it gave you that beautiful feeling. They loved the music, and we were making money for them.