Originally written as a Masters Thesis, this is the eighth of a sequence of pages adapted from the full thesis. For the bibliographic references in the text go here. 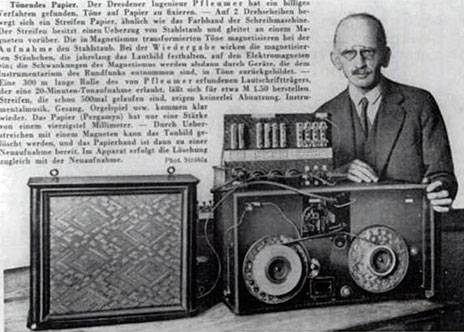 While a student at Mt. Tamalpias High School in Marin County, located across the Golden Gate from San Francisco, Tim Moseley was the foreman of the school's excellent machine shop. In 1921, when he was nineteen, Moseley established his own machine shop in San Francisco, the Dalmo Manufacturing Company. He often improved on the designs he was given by his customers, and was soon inventing his own products (Morgan, 1967).

His company grew to about 20 employees by 1934 when he hired a immigrant Russian research engineer named Alexander Poniatoff to help with the development work. Poniatoff had come to San Francisco by way of Shanghai, where he worked at a power station. He then worked for General Electric in Schenectady, N.Y., as a research engineer for three years, and for PG&E in San Francisco for four years. Bored with his work at PG&E and in spite of the Depression, Poniatoff quit his job and approached Moseley for work, stating that he would work on a trial basis for no pay. Moseley agreed. Poniatoff's first assignment was to fix a problem with a permanent wave hairstyling machine that Moseley was building for a local distributor. They patented the improved design, sold it to the distributor, and Moseley shared half of the proceeds with Poniatoff (Poniatoff, 1974).

Poniatoff worked for Moseley until 1939 when the company was bankrupted by a patent infringement suit brought by the Schick Company for an electric shaver they had developed. Poniatoff went back to work for PG&E until, in 1944, Moseley asked Poniatoff to help him work on a prototype airborne radar antenna for the Navy. According to Poniatoff, Moseley said to him, "Do you know anything about radar?" Poniatoff replied, "I don't, not a damn thing." "Neither do I," Moseley said, "But the contract says the unit must be completed in 100 days, so you can't waste time" (ibid). In the Dalmo-Victor shop in San Carlos, they attacked the project in true Silicon Valley "tiger team"(26) style; they worked for 100 days straight, slept in the shop, and seldom had time to shave. In 100 days they had their prototype and won the contract. At a banquet in their honor, a Navy admiral told them this story: "This contract was issued to Westinghouse, General Electric, and another company. Then this Moseley arrived, out of the woods, nobody knew who he was. He wanted the contract. When the models were brought in, we studied all of them. Moseley's model was so obviously ahead of the others we told the other companies good-bye" (ibid).

Westinghouse offered to manage the contract, arguing that it was too complex for a small company like Dalmo-Victor. Moseley agreed, and moved to a larger facility in Belmont to produce the unit. The company employed about 25 housewives during the war (Poniatoff, 1974). Dalmo-Victor became the leading manufacturer of airborne radar antennas. By 1966 the company was also producing 90 percent of the nation's submarine antennas, and was building communications antenna systems for NASA lunar missions (Morgan, 1967).

Key components of the radar antenna system designed by Dalmo-Victor in 1944 were two small precision electric motors to aim the device and a tiny generator to supply power. Motors and generators of this sort were unavailable on the open market at the time. Moseley asked Poniatoff to form his own company to manufacture them. Poniatoff was initially shocked at the suggestion, but after few days of thought he agreed, adding $5,000 of his savings to $25,000 invested by Moseley to capitalize the start-up. Poniatoff also got a loan from the First National Bank, an institution he was to develop a long-term relationship with. Poniatoff set up shop in an attic above Dalmo-Victor, naming his new company Ampex after his initials (he was known as Dr. AMP around the Dalmo-Victor shop) plus "ex" for excellence. As he was setting up his shop and before he had hired any workers, he was visited by a union agent who insured that Ampex would hire from the union as Dalmo-Victor did. Ampex soon had the precision motors in production (Poniatoff, 1974).

Poniatoff was impressed by a new Dalmo-Victor employee named Forrest Smith, who had just graduated from Stanford and where he had been one of Frederick Terman's brightest students. Poniatoff asked Moseley if he could hire him as general manager of Ampex and Moseley agreed. Smith was trepidatious at first; he was reluctant to alter the organizational structure because it was such a tightly knit group. He said to Poniatoff, "There's no supervision, everyone is busy as hell, and working on their own. Where is your organizational chart?" Poniatoff replied, "I have no organizational chart, I just train people to do something, and that's the end of it" According to Poniatoff, "the spirit at the company was terrific, everybody just wanted to do whatever they could." Poniatoff took a personal involvement in this atmosphere, developing a tradition of supplying birthday cakes and parties for his workers (ibid).

As the company expanded with wartime production, it was moved into a larger facility in San Carlos. Most of the military work went to supply the Pacific theater, particularly antennas for the aeroplane known as the "black widow." When the news of Japan's surrender came, Poniatoff called a celebration at the company. As the party was getting underway, telegrams came from the military cancelling all orders. Although some advised Poniatoff to close his company and quit while he was ahead, he was determined not to lay off any of his workers. Poniatoff and Smith cast around for ideas for a commercial product, and since they both liked music, they decided to develop home high fidelity sound systems. A $40,000 order for 10,000 precision motors from a Berkeley furnace manufacturer kept the company afloat as they developed their new product. Between October, 1945, and October, 1946, they spent $76,000 on development. Smith had been going to Harold Lindsay, an engineer at Dalmo-Victor, for advice on loudspeaker improvements he was devising. Myron Strahlerov, who later developed the first video tape recorder for Ampex, was developing an improved amplifier for the system. Poniatoff, as he had done with Smith, hired Lindsay away from Moseley, who still had $25,000 invested in Ampex (ibid).

As the development of the hi-fi system progressed, it became clear to the team that the weakest link was the phonograph disk player. It was then that Mullen attended an Institute of Radio Engineers meeting in San Francisco, where he witnessed a demonstration of a German tape recorder called "The Sound Mirror."(27) The Sound Mirror had been designed as a low cost unit and was of poor quality. Poniatoff perceived the tape recorder as "the missing link in the hi-fi system" and set on a program to reverse-engineer the German unit. Although Ampex's small precision electric motor technology was well suited for tape recording, the technology involved with the magnetic tape heads was entirely new to them (Poniatoff, 1974). 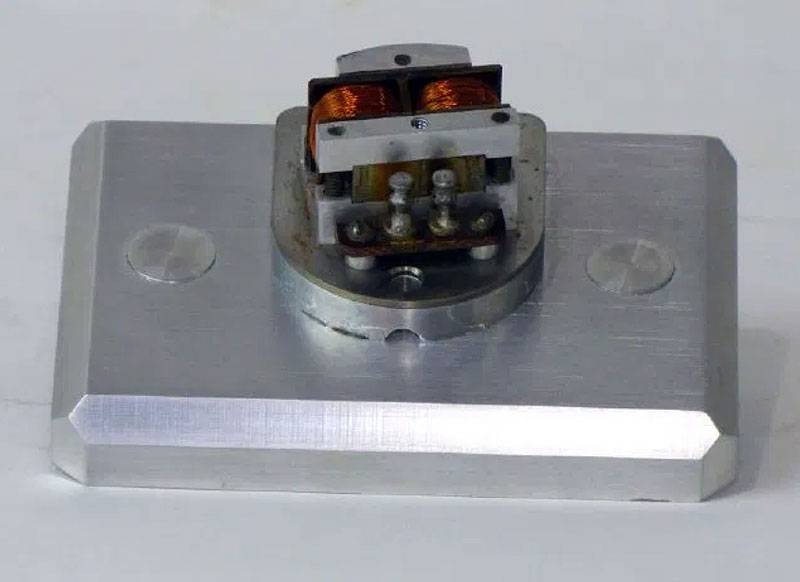 Poniatoff pulled in more local talent for the development of the tape recorder, including Walter Seltser, who had designed a transmitter for a local radio station, and Frank Leonard of Berkeley. Leonard, who had a sound room at his house, was described to Poniatoff as "a young boy who was highly interested in electronic high fidelity music." Moseley pulled his $25,000 out of Ampex because tape recording was untried. One day a representative from 3M Company, who had heard of Ampex's development efforts, come to San Carlos with a sample of the new magnetic tape they were developing. The two companies worked together to improve the quality of magnetic tape, clearing up a crucial development problem for the team at Ampex. The development of the tape recorder absorbed so much money that it became necessary to abandon the development of other components of the hi-fi system (speakers and amplifier). Furthermore, because of the high cost and high quality of the finished unit, the team realized that it was suitable only for professional use (ibid).

When it was learned that Bing Crosby was shooting a film in San Francisco, the Ampex tape recorder was put in a station wagon and brought to him for a demonstration. On hearing the quality of the recording, Crosby said, "That's it." Crosby Enterprises ordered 20 units for $3,000 each, and negotiated a deal to become sole distributor for the product. Soon Jack Benny, Bob Hope and Michael Todd, the developer of Cinerama, became customers. When ABC balked at the new technology, and refused to air Crosby's recordings using the new machine, Crosby threatened to change networks, forcing ABC to adopt it (ibid). 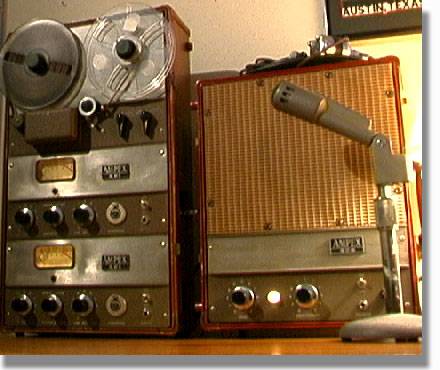 As Ampex switched its production exclusively to tape recorders, it continued to receive orders for precision motors. Poniatoff encouraged an employee named Walter Cabral to start his own company to produce them. "I said, 'Why don't you start your own company like Moseley [helped] me [to do]' I talked him into it. 'Supply it', I said, 'Here is the order'" (Poniatoff, 1974).

Through many of the lean times, Poniatoff found he was able to secure loans through First National Bank in San Francisco. When First National was sold to Wells Fargo Bank, Poniatoff was told of a "very remarkable consultant to new companies" at Wells Fargo who "has had a lot of experience helping struggling young companies like yours." This was Stanfield Rayfield, who set up a meeting at the St. Francis Hotel in San Francisco between Poniatoff, Smith and Henry McMicking, a wealthy investor with interests in the Philippines. McMicking invested $365,000 in Ampex, forming a 50/50 partnership with Poniatoff. McMicking brought in an IBM salesman from the Philippines named Kevin Mallen to be general manager. Mallen set up new distribution channels, breaking the exclusive contract with Crosby. McMicking was well connected in Washington D.C., being President Eisenhower's personal flying instructor, and helped to secure contracts from the National Security Agency. McMicking set a five-year plan for the company to grow to $11,000,000 in annual sales. Although Poniatoff thought he was crazy to set such goals, the company well exceeded this level by the early 1950s. McMicking drastically reorganized the marketing structure of Ampex, but he had a strict policy not to interfere in any way with engineering. By 1957 Ampex had 1500 employees, and a wide range of products for professional recording, commercial aviation, and the U.S. government (Poniatoff, 1974).

26. The "tiger team" approach to product development in Silicon Valley is typified by a story told by Ron Johnson, CEO of RJ Associates Business Resource Networks of San Jose. "...in 1982 two young engineers from Stanford came to [me] seeking a miracle. The task: build a PC clone box with backplane wiring and connectors for add-in boards. [I] took a week off [from Hewlett-Packard]. It was Tuesday. The San Francisco Computer Fair opened Saturday. They offered me $25,000 or stock. I worked almost straight through, without sleep. We had a prototype to paint early Saturday morning, they assembled it in the van on the way to the show, and had a product in the booth by noon. I took the money. Looking back I should have taken the stock—it's a $100 million dollar company today. (quoted in Joss, 1990)

27. Tape recording was first developed by the Telefunken Company in Germany during the 1930s. During World War II, the German military played tapes of speeches and music over makeshift radio stations set up in the remains of cities that has been destroyed by Allied bombs. The tapes were too long and of too high sound quality to have been recorded onto phonograph disks, confusing Allied intelligence about the success of bombing raids and as to the whereabouts of important political figures.