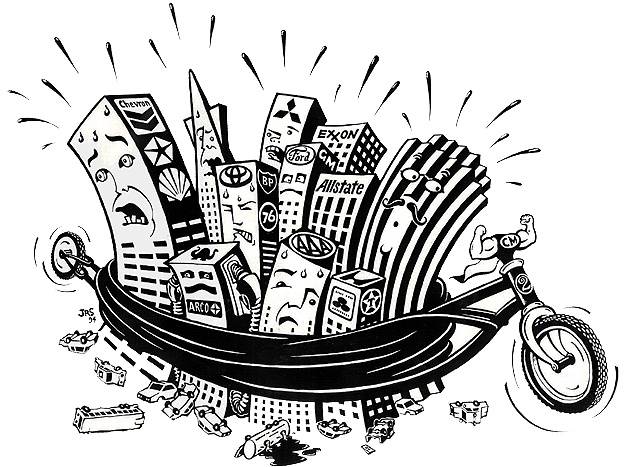 In San Francisco the organization of the event has been as much a part of its success as anything else. Organizational politics, with its official leaders, demands, etc., has been eschewed in favor of a more decentralized system. There is no one in charge. Ideas are spread, routes shared, and consensus sought through the ubiquitous copy machines on every job or at copy shops in every neighborhood—a "Xerocracy", in which anyone is free to make copies of their ideas and pass them around. Leaflets, flyers, stickers and ‘zines all circulate madly both before, during and after the ride, rendering leaders unnecessary by ensuring that strategies and tactics are understood by as many people as posssible.

Xerocracy promotes freedom and undercuts hierarchy because the mission is not set by a few in charge, but rather is broadly defined by its participants. The ride is not narrowly seen as an attempt to lobby for more bike lanes (although that goal exists) or to protest this or that aspect of the social order (although such sentiments are often expressed). Rather, each person is free to invent his or her own reasons for participating and is also free to share those ideas with others. Some people are there to promote human powered transportation as a viable alternative, others seek the respect of motorists and city planners and some take part simply because they like riding bikes and feeling a sense of community with all the other cyclists on the Critical Mass ride.

This "organic system" doesn’t lead to chaos, but rather a festive, celebratory atmosphere. Great pains have been taken to avoid the common pitfalls of other movements, with much Xerocratic space being devoted to arguments against moralizing attacks on motorists and other unproductive tendencies. By presenting bicycling as a fun, positive alternative to the dreary destructiveness of car culture, Critical Mass has gained immeasurably.

Critical Mass "How To" cover.