Committee of Vigilance of San Francisco 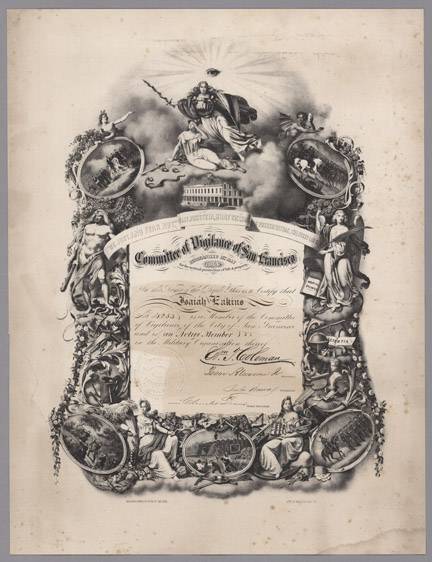 The Committee of Vigilance of San Francisco was an organization formed by citizens to administer justice, operating separately from the government.

The first committee was formed in 1851 to protect the citizens of San Francisco from the “organized band of villains who are determined to destroy the city,” as a newspaper of the time claimed. Sam Brannan was the leader of the first Committee of Vigilance. This militia group included its own “law-enforcement” force, and its justice system—parallel to the State one—used trials and punishments that included lynching, whipping, and deportation.

The second committee was formed in 1856 and it was much larger, with 6,000 members compared to 700 members in the first.

The Committee of Vigilance used symbolism and elements characteristic of secret societies:

• Their main symbol was a masonic eye that conveyed the idea of the surveillance and control by the Committee’s policing force. We see this eye in the membership certificate of Isaiah Eakins above, together with other symbols.
• In addition to the numerous symbols, Eakins's membership certificate shows five military scenes that highlight the violent nature of the committee. In addition, there are several mythological figures. These reflect that these men are the morally elevated group of individuals that should constitute the government and ruling force of the city. They considered themselves “the best of society”, and this entitlement allowed them to act as representatives of all citizens in defending the city.

Both committees had a series of mottos and phrases, such as:

“Be Just and Fear Not”
“Self preservation, the first law of nature”
“No Creed. No Party. No Sectional Issues”
“For the mutual protection of life & property”

The Committee of Vigilance of San Francisco also had a system of secret signaling. The signal for assembling was given by the bell of California Engine Company, and it consisted of two taps, a long pause, two taps, another pause, and so on, until the count reached twenty, by which the members of the committee should have assembled.

The members of the Committee of Vigilance were most commonly white merchants, clerks, and skilled workers. We know that William Tell Coleman, who signed the membership certificate of Isaiah Eakins, was the leader of the second Committee of Vigilance. He was originally from Kentucky, got his education at St. Louis University, and then went to California, where he started a shipping business. In 1857 he moved to New York City, when his shipping business started a steamship line between San Francisco and New York.

We do not have much information about Isaiah Eakins, who was not such a public figure at the time. It is possible that his last name is of Irish origin. This would be interesting because the Committee of Vigilance led an active and aggressive opposition to Irish-Catholics. They exiled over two dozen mostly Irish-Catholic democrats supposedly for political crimes, and Irish-Catholics were largely excluded from membership.

Both committees were also very much related to politics in the city, in a mission against corruption of the state. In accordance to Philip Ethington’s conception of republicanism, these Vigilante groups were formed as a way to build political power and defend it, as he explains in his book The Public City: The Political Construction of Urban Life:

The urban public sphere of the 1850s was a closed, unitary arena for the pursuit of organization, power, authority and policy … The white male dominated political community of privileged citizens guarded access to a public sphere against invasion from women and people of color. That public sphere, in turn, was the arena in which party activists had to pursue their goal of organizing. The executions by the Vigilantes were an exercise in political communication within a political culture that was still intensely public.

As a matter of fact, the leader of the first committee, Sam Brannan, was elected to the California State Senate in 1853. Once the second committee was dissolved on August 11th 1856, it transferred its political power to the People’s Party, who ruled until 1867, and then it became part of the Republican Party.

Richard Maxwell Brown analysis from a legal and behavioral perspective poses a strong critique of the committees. He makes a case that the upper classes of merchants and landowners in San Francisco claimed that the city was being taken over by criminals as an excuse to seize government power. Arson was one of the main crimes that the first committee targeted. But several historians have argued that the organizers of the committee had a lot to gain from arson in the city, since many of them profited from the reconstruction.

Contemporary views put more weight on their efficiency, focusing on the importance of protecting life and private property. Contemporary historian H.H. Bancroft is an example of this trend of thought. He was one of the first historians to access the archives of the first and second Committees of Vigilance, and he also interviewed individuals who were directly involved in the committees. He was explicitly in favor of the committees, and he built and expressed his argument in newspapers and books at the time.

Philip J. Ethington, Vigilantes and the Police: The Creation of a Professional Police Bureaucracy in San Francisco, 1847–1900, Journal of Social History

Mary Floyd Williams, History of the San Francisco Committee of Vigilance of 1851 (University of California Press, 1921).