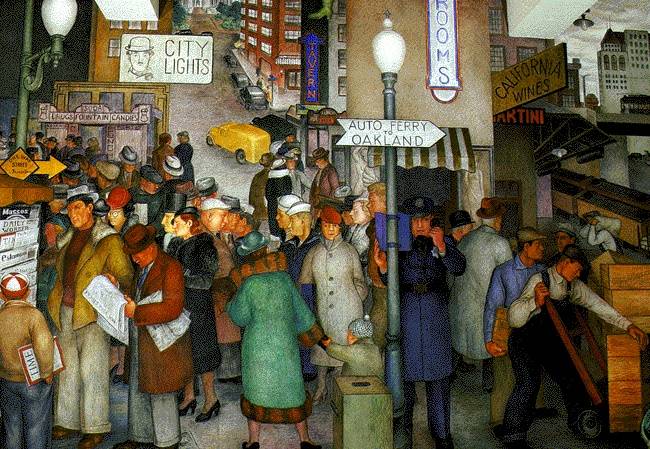 Three of the men who studied with Diego Rivera shared his politics as well as his style. They worked together on San Francisco's Coit Tower, the first major achievement of the initial PWAP art project in California. As a result of this project, artists Victor Arnautoff, Bernard Zakheim, and Clifford Wight, along with John Langley Howard, who had not studied with Rivera, managed at the outset of the New Deal to impart a lasting radical flavor to federally supported art. Although some twenty-five artists painted murals in the cylindrical tower on Telegraph Hill, it was the four artists' criticisms of American society that attracted the public's attention. 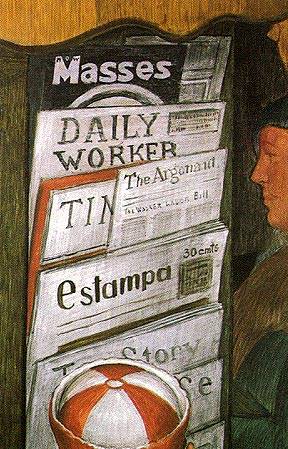 Arnautoff, a well- known radical who eventually left the United States to return to his native Soviet Union, included two left-wing periodicals--The Masses(26) and The Daily Worker--in the news kiosk featured in his mural entitled "Metropolitan Life."(27) Although the mural depicted a prosperous scene, its benign mood was disturbed by an automobile accident and by a well-dressed businessman being relieved of his wallet at gun point.(28)

In his "California Industrial Scenes," John Langley Howard included a group of striking miners, one of whom holds a copy of the radical paper, The Western Worker.(29) In another part of his mural, Howard made an even stronger statement which juxtaposed a new hydroelectric plant with an angry-faced unemployed couple forced to wash their clothes and pan for gold in the river below the dam. So that no one missed the point, Howard added a group of chauffeur-driven rich folk who gape in amusement near the poor people's tent. Finally, Bernard Zakheim's library scene showed a man pulling a copy of Karl Marx's Capital off a book shelf, while others read newspapers featuring headlines critical of the Hoover administration and fascism in Europe.(30)

The political statements made in the murals by Arnautoff, Howard, and Zakheim aroused considerable public opposition but were allowed to survive. Clifford Wight's hammer and sickle, the communist symbol which appeared in a series of medallions illustrating the range of political philosophies existing in America, did not. The San Francisco Parks Commission, the agency which administered the tower, concluded that American philosophies did not range that far left on the political spectrum and summarily locked the tower until the offending symbol was chipped from the wall.(31) 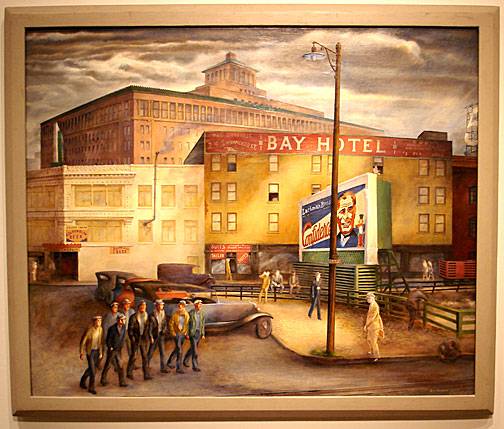