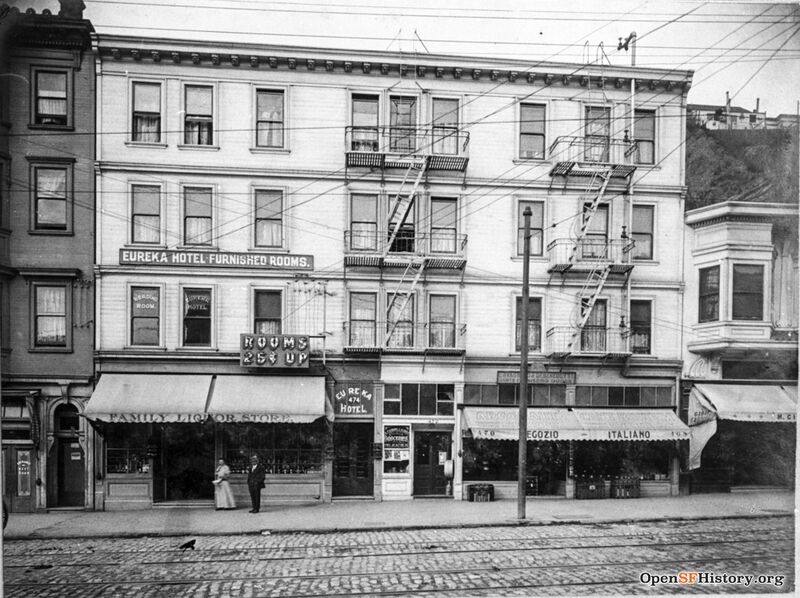 This survey of patterns of life and work in the major neighborhoods of San Francisco has come full circle, back to Market Street, across which stood foundries and warehouses, factories and shipyards, boardinghouses and saloons. Of the major areas of the city, some were more ethnically homogeneous than others, and some showed greater homogeneity of occupation and income. Only the Chinese were segregated, prohibited from living outside Chinatown, barred from many occupations. Those Chinese willing to accept occupational segregation could live outside Chinatown as laundrymen or servants, and the Chinese in Chinatown were able to engage in occupations otherwise closed to them (the building trades, for example) so long as their employers or patrons were also Chinese. Next to the Chinese, the Italians were the most ethnically concentrated, both residentially and occupationally. Unlike the Chinese, however, there were no barriers to Italians who sought to move outside group patterns, and successful Italian businessmen could be found down the peninsula or, in the 1920s, in the new Marina District between Pacific Heights and the bay. The bulk of Irish Catholics may have lived South of Market or in the Mission, as skilled workers or laborers, but Irish Catholics were also the masters of Nob Hill palaces and Pacific Heights mansions, including the Floods and Fairs, the Tobins and Phelans, and others. Germans—Protestant, Catholic, and Jewish—were not just merchants and shopkeepers but also skilled workers and day laborers and were to be found South of Market, in the Mission and Western Addition, and on Pacific Heights.(48)

Nonetheless, there were clear patterns linking ethnicity, sex, marital status, occupation, and neighborhood. These patterns closely resemble models of labor-market segmentation developed over the past decade by some labor economists, who have divided the labor market into an upper primary tier, a lower primary tier, and a secondary market. The upper-tier primary market consists largely of white-collar professional and managerial positions, the lower-tier primary market largely of blue-collar occupations that pay reasonably well and have good working conditions, some chance of advancement to the level of foreman or supervisor, and—above all else— stability of employment. The secondary labor market is low paying, with poor working conditions, little chance of advancement, often harsh and arbitrary discipline, and—above all else—highly unstable employment conditions with frequent periods of unemployment. Michael Piore has linked these three segments of the labor market to three social class groups described in sociological studies: middle class (the upper-tier primary market), working class (lower-tier primary market), and lower class (secondary market).(49)

San Francisco at the turn of the century shows the characteristics of three such segment classes. The lowest level of the secondary segment, characterized by sweatshop conditions and low pay, was avoided by most workers except Irish women and Chinese men, who, because of their concentration in low-paying work with sweatshop conditions, were the most discriminated-against members of the work force. The secondary labor market also included day laborers, servants, and waiters and such blue-collar occupations as teamsters, sailors and boatmen, and longshoremen and warehousemen. These occupations were filled largely by Irish men, but with some specific occupations filled largely by Scandinavians or Italians, and with some jobs including significant proportions of Irish women, Chinese men, or blacks. Blacks were concentrated in the service sector and were excluded from a number of occupations. 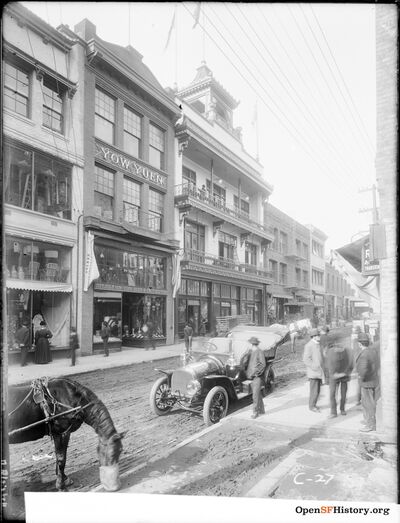 The lower tier of the primary market (working class) included most of the metal trades and building trades, many shopkeepers and tradespeople, many small hotel and restaurant owners, saloonkeepers, and some merchants, especially those whose operations were small in scale. Samuel Walker, in 1875, told of a wealthy San Franciscan giving a party, forced to choose which of his many acquaintances he would invite: “ ‘We must draw the line somewhere, you know,’ and he drew it bravely between wholesale and retail. The man who sold soap and candles by the box was decreed to be within the ‘sacred pale’ of society’s most elect. The man who sold soap and candles by the pound was voted a social Philistine.” The upper tier of the primary market included the remaining merchants—those who sold their soap and candles by the box—and other white-collar business occupations and the professions.(50)

While the lines dividing these three segments of the labor market become reasonably clear in historical perspective, they were not necessarily hard and fast barriers for most workers. Chinese, blacks, most women, some Italians, and, apparently, some Scandinavians were limited in various ways and to differing degrees, but the vast majority of the work force—the native stock, British, German, and Irish men—were not excluded from any level. The lines dividing Irish hackmen from Irish plumbers, German bartenders from German restaurateurs, Jewish clerks from Jewish merchants, were highly fluid. Some recent sociological studies suggest that one key difference between uncertainty of employment (secondary market) and stability (primary market) is in some part a state of mind or a stage of development of the individual. Such views note that many workers in the secondary labor market are youths, offspring of the working class and middle class. In San Francisco at the turn of the century, the occupations with the smallest proportions of married men—teamsters, bartenders, sailors, day laborers servants, and the like—also had the largest proportions of workers between the ages of sixteen and twenty-four. This seems to support the notion that the decision to marry typically accompanied a decision to change occupations and to move into the lower tier of the primary market because of the need for stability of employment.

Some workers never moved from lower-class instability to working-class stability, for varied reasons. Lack of available jobs in the lower tier of the primary market might discourage marriage because of the difficulty of supporting a family on secondary market earnings. Conversely, a great disproportion between men and women might make marriage impossible for lack of a spouse and might cause some single males to remain permanently in the secondary market out of lack of incentive to seek primary market employment. Others might be barred from the primary market because of ethnic- or sex-based discrimination. Regardless of cause, one effect was that males in the secondary labor market, outside families, sometimes exhibited behavior patterns described as extended adolescence and were often seen by the larger community as “boys” (regardless of their age) because circumstances had prevented them from developing patterns of behavior defined as adult by the larger community. Piore suggests: “Their life tends to be characterized by an effort to escape routine through action and adventure.”(51) In San Francisco, the four-to-three ratio between men and women seemed to dictate inevitably that a quarter of the city’s men would remain unmarried and never become heads of families, a status that the dominant cultures of the city—Mission, Western Addition, elite, or North Beach—defined as marking the transition to adult status. The existence of South of Market, a large lower-class district catering to young single males, reinforced this tendency.

During the third of a century following the destruction of 1906, many of these patterns of residence, work, ethnicity, and family not only continued but also in some instances intensified. Numerous researchers—on neighborhoods, ethnic groups, or architectural history—all agree that after 1906 the South of Market became more the domain of single men, that the Mission became more Irish, that the Geary-Fillmore area of the Western Addition became more Jewish, and that North Beach became more Italian.(52)

During the first third of the twentieth century, several new residential areas developed, most of them extensions of patterns already well established by 1900. New elite districts—Presidio Heights, Sea Cliff, Forest Hill, St. Francis Wood—were extensions of the patterns established in the Nob Hill–Pacific Heights area. The Richmond District, west from the Western Addition between the northern edge of Golden Gate Park and the southern boundary of the Presidio, became home to middle-class families, many of them moving west from their previous homes. Temple Emanu-El moved there in 1926, squarely on the boundary between the western extension of Pacific Heights and the eastern edge of the Richmond. Eventually other congregations were established in the central Richmond as well. There, too, many Russians settled after World War I, and small onion-domed Russian Orthodox churches were scattered through the Richmond during the 1920s and 1930s. There the new Russian Orthodox Cathedral was built in the early 1960s. (It had previously been located at Fulton and Fillmore in the Western Addition.) If the Richmond was, in many ways, a westward extension of many of the social and cultural patterns of the Western Addition at the turn of the century, new areas in the Outer Mission—Portola, Excelsior, Miraloma, Ocean View, Ingleside—were extensions of the Mission District, inhabited by skilled workers and lower-middle-class entrepreneurs and professionals, Irish, Italian, and German Catholic. The largest of the new districts, the Sunset, taking in roughly the southwestern quarter of the city, was developed in the 1920s, 1930s, and 1940s, after the Twin Peaks and Sunset streetcar tunnels were completed in 1917 and 1928. The Inner Sunset, the area between Kirkham Street and Golden Gate Park, out to about Twelfth Avenue, was built up before World War I, and in the rest of the Sunset mass-constructed rowhouses were built in the 1920s, 1930s, and 1940s. The Sunset was heterogeneous, with many middle-class families of Irish descent mixed with those of western European descent. By 1940, several huge Spanish mission-style Catholic parish churches had risen above the surrounding two- and three-story rowhouses.(53) 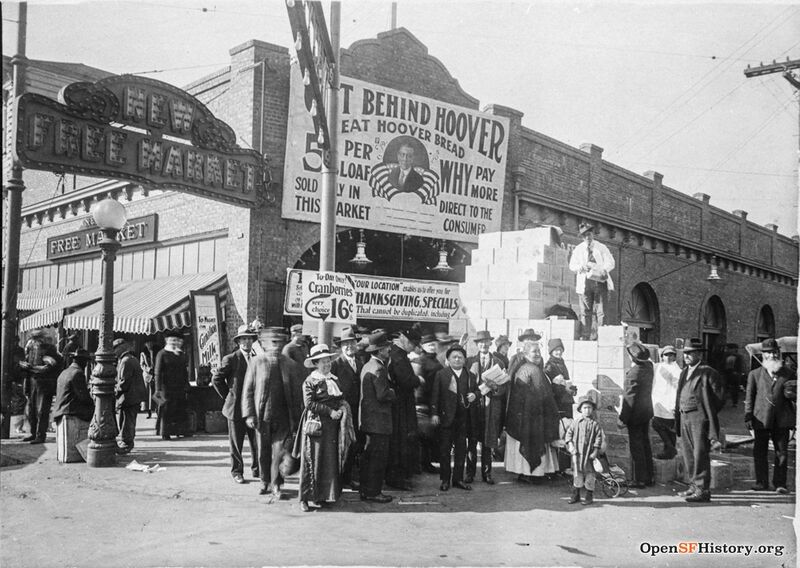 O'Farrell near Fillmore in the Western Addition, November 1917.

return to beginning of chapter