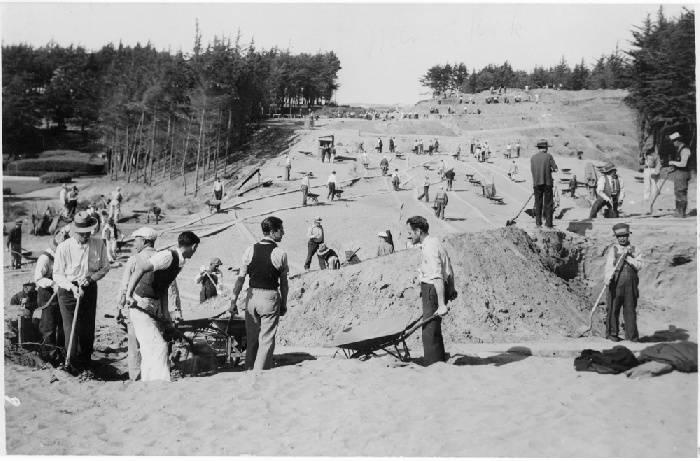 As with the rest of the country, San Francisco was hit hard by the Great Depression that began after the Black Tuesday stock market crash of October 24, 1929. By the time Franklin D. Roosevelt was elected in November 1932, unemployment was reaching 25%. After FDR took office in January 1933, he began looking for ways to spur employment and economic recovery. One such program, announced on November 8, 1933, was the creation of the Civil Works Administration (“CWA”).

The CWA was a federally-funded job creation program that mainly created manual labor construction jobs around the country. The CWA set up offices in major cities around the country and took applications for civic building projects that would employ people. The San Francisco CWA office was located in Larkin Hall in the Civic Auditorium. In 1933, California also created the State Emergency Relief Administration (“SERA”) to distribute state and federal funds for jobs.

San Francisco submitted numerous project applications to the CWA and was looking to employ as many as 16,000 people.(1) These projects began by the end of November 1933 and continued into and through part of 1934. A local construction manager, Frederick Whitten was named the chairman of the local works committee and on Thanksgiving Day, November 30, 1933, he announced the assignment of workers to various projects. The biggest project in San Francisco was the construction of Lake Merced Boulevard where nearly 5000 workers were eventually employed, including 2800 men on two shifts in Whitten’s first announcement. 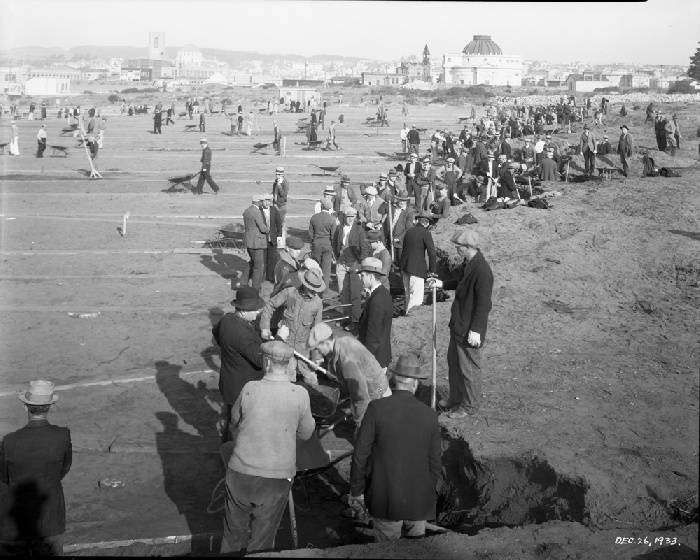 Construction work at Odd Fellows Cemetery to convert it to Rossi Playground, December 26, 1933.

Other projects announced by Whitten included work at the Odd Fellows Cemetery. The cemetery on the western slope of Lone Mountain had been opened in 1865, but most of the bodies interred there had been moved to Greenlawn Cemetery in Colma by 1933. San Francisco sought to have the site converted to a playground and the application was approved. Whitten assigned 200 men there in his Thanksgiving Day announcement and more were added later. Today’s Rossi Playground was the result of their work. 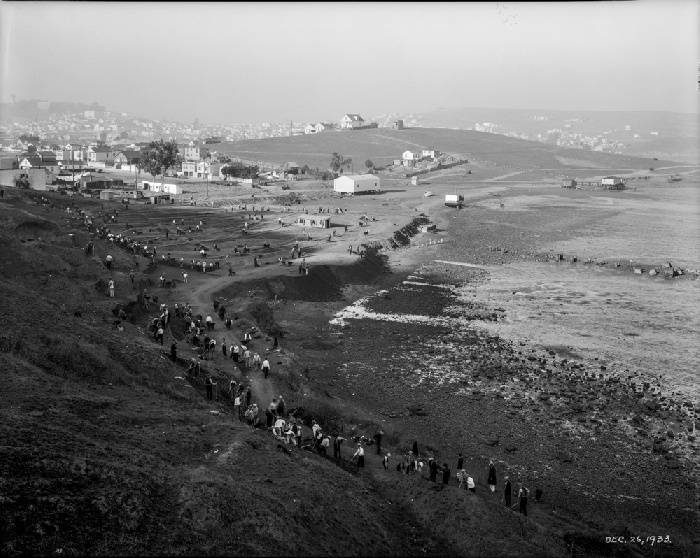 One of the other major road projects was the extension of Alemany Boulevard. This work included the construction of St. Mary’s Park. Whitten put 650 men to work there at the beginning. Between CWA, state, and local funds, San Francisco looked to complete its planned boulevard system. In addition to Lake Merced and Alemany Boulevards, work was done on Bernal, Junipero Serra, and Dewey Boulevard extensions and to various street projects, including road improvements in Golden Gate Park. 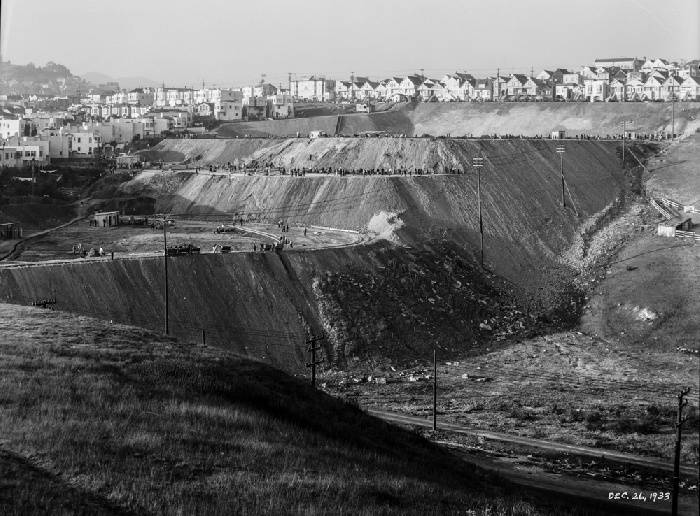 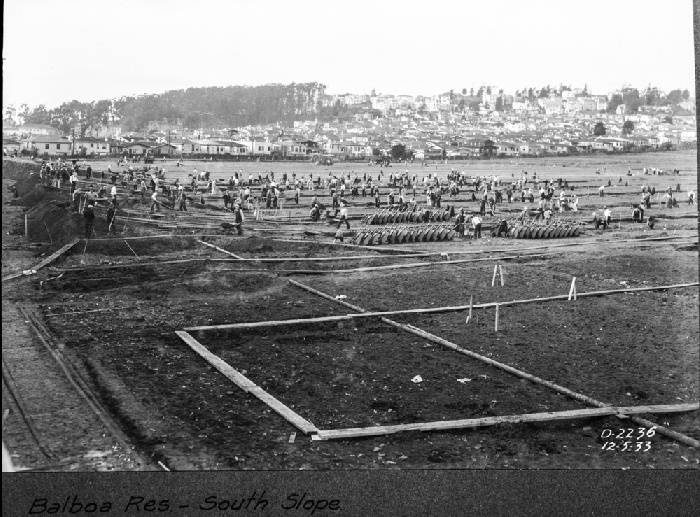 Another of the biggest projects though was one that was never finished. Long-time San Francisco City Engineer, Michael O’Shaughnessy, had been advocating for a huge water reservoir in the Balboa Park area as part of the Hetch-Hetchy water system. It was to be a 42-acre, 280 million gallon reservoir.(3) Ironically, after O’Shaughnessy lost control of the Hetch-Hetchy Project in 1932, funds to construct the Balboa Reservoir were approved by the CWA in 1933. Work started on grading and digging for the reservoir in December 1933.

The Balboa Reservoir project caused much dissension among city supervisors, government agencies, and local merchants and farmers. As a result, work on the reservoir would be halted in May 1934 and the reservoir was never completed, although additional work was done on it in the 1950s. The land would be used for various uses, such as for buildings and a parking lot for City College of San Francisco. Discussions continue even today as to what to do with the site.

The Civil Work Administration was a temporary measure to help the great masses of unemployed workers get through the winter of 1933-34. It received a good deal of criticism since it did not help workers gain permanent employment. President Roosevelt ended the CWA program in 1934 and then pushed through new legislation, the Works Progress Administration, in May 1935 to provide employment as part of his New Deal measures. Although short-lived, the CWA projects in San Francisco had the immediate impact of providing employment to thousands of unemployed San Franciscans and the lasting impact of many public works projects that can still be seen today. 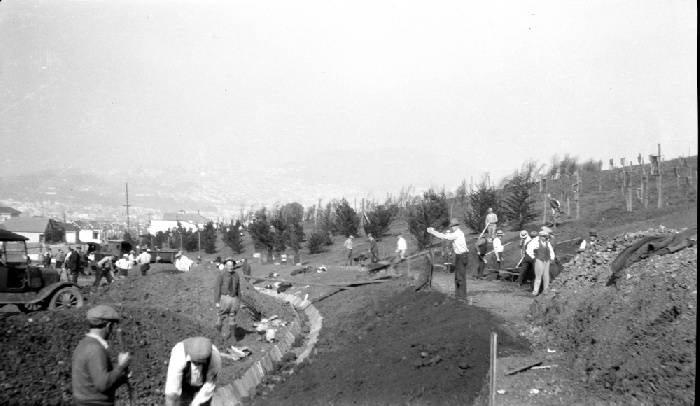