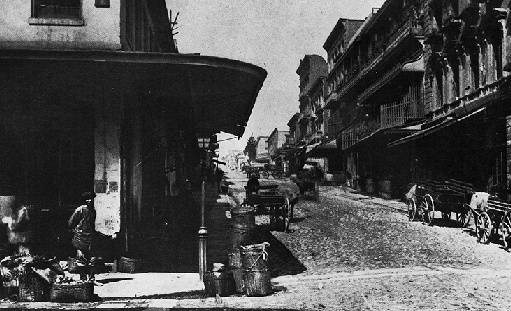 Looking west on Sacramento St. from Dupont Street (now Grant Ave.), c. 1882. At the time Chinatown was only about 6 blocks long.

In the year 1882, a key date in American immigration history, the first Chinese exclusion law was passed following years of domestic anti-Chinese agitation. Marking a basic change in U.S. immigration policy, the law declared immigration to be no longer free and unrestricted, and the Chinese were given the dubious honor of being the first racial group whose entry to the country was thus limited.2

Initially the 1882 law barred only the entry of Chinese laborers for ten years and left open the question of admission of other classes of Chinese. By 1888, however, the pressure of anti-Chinese groups had shaped its interpretation so as to deny admission to all Chinese except those classes specifically exempted by treaty: officials, merchants, teachers, students, and travelers for curiosity or pleasure. The exclusion act was revised several more times, closing loopholes and becoming stricter in its provisions, and by the turn of the century, the restriction process was consciously and actively moving toward total exclusion.

During these years, events across the Pacific did not bode well for the Chinese people either. China's traditional society was falling apart under the pressures generated by intruding Western nations, and life was increasingly difficult. Many Chinese, especially in southeast China, were virtually forced to seek better conditions abroad. Thus, despite the known unfriendly environment for the Chinese in the United States, they were willing to risk rejection under the exclusion laws in order to enter this country and improve their economic lot. Some traveled to Canada or Mexico, where they were smuggled across the borders into the United States. Others sought admission at one of the American ports of entry, the largest proportion debarking at San Francisco. Many held credentials of questionable validity.4

Under the United States immigration regulations, the burden of proof for entry qualification rested:

"...upon Chinese persons claiming the right of admission to, or residence within, the United States, to establish such right affirmatively and satisfactorily ... and in every doubtful case the benefit of the doubt shall be given ... to the United States government."

Reflecting the anti-Chinese prejudices of the period, the belief at the Bureau of Immigration was that the Chinese were a people "deficient in a sense of the moral obligation of an oath," and inspectors held all Chinese claims for right of admission suspect until proven otherwise. Believing that Chinese immigration was bad for the country, they sought to exclude rather than to admit and hence routinely subjected new arrivals to intensive and detailed cross examinations.5

Over the years an extremely high percentage of Chinese were denied admittance to the United States. For example, during the fiscal year 1902-1903, inspectors in San Francisco landed 1628 Chinese and debarred 516, and for the fiscal years 1903 through 1905 they rejected one out of every four applicants from the exempt classes.6 To the authorities these statistics served to prove the fraudulent intent of the bulk of the Chinese applying for admission.

The Chinese, however, viewed the immigration authorities' draconian administration of the exclusion laws as unfair and discriminatory, terming the statutes keli or "tyrannical laws." They addressed numerous complaints to the United States government and to Chinese diplomats stationed in this country, objecting to the harsh treatment of the Chinese in general and protesting in particular the suspicious and discourteous attitude evidenced toward members of the exempt classes. They charged that many questions asked by the immigration officials were unreasonable, impossible to answer correctly, and intended to entrap rather than to elucidate information. They alleged that some officials even questioned female applicants on intimate details of their marital lives and embarrassed them into silence.7

In 1905 these grievances about immigration procedures resulted in a boycott of American goods which started in Shanghai and spread to Canton and other Chinese cities and many overseas Chinese communities. Sustained several months, the boycott forced the U.S. to relax some of the more objectionable regulations. The basic negative attitude of the immigration authorities toward Chinese immigration, however, remained unchanged,8 and it was against this background of struggle that the Angel Island Immigration Station was proposed and established.

Throughout the late 1880's and early 1900's Chinese ship passengers arriving at San Francisco were detained in a two-story shed at the Pacific Mail Steamship Company wharf (known to the Cantonese Chinese immigrants as muk uk or "wooden house") until immigration inspectors could examine them and determine their admissibility. As many as 400 or 500 people were crammed into the facility, and conditions there were described in 1900 by Reverend Ira Condit, a missionary working among the Chinese in California, as follows:

Merchants, laborers, are all alike penned up, like a flock of sheep, in a wharf-shed, for many days, and often weeks, at their own expense, and are denied all communication with their own people while the investigation of their cases moves its slow length along.9

Chinese community leaders in Chinatown, alarmed at the unsafe and unsanitary condition of the structure, accordingly addressed numerous complaints to U.S. officials. Immigration Commissioner General F. P. Sargent finally inspected the facility on November 18, 1902, and was forced to declare that

[so] far as the Chinese immigrants are concerned, the facilities ... are entirely inadequate.... [The] detention shed should be abolished forthwith. Chinese are human beings and are entitled to humane treatment, and this is something they do not receive under present conditions....10

Sargent's report of 1903 recommended that funds be appropriated to erect an immigration station on Angel Island for accommodation of aliens, chiefly Chinese and other Asians. The forthcoming decision to move the station to Angel Island was not solely due to humanitarian concern, however, for officials also felt that the island location would effectively prevent Chinese on the outside from communicating with the detainees and would isolate immigrants with "the communicable diseases which ... are peculiarly prevalent among aliens from oriental countries."11 The station would also be escape-proof.