The Chinese Exclusion Act of 1882 prohibited Chinese immigration into America and denied the Chinese the right to naturalization. Chae Chan Ping, a Chinese American living in California, returned to China to attend his father’s death, just before the revise of the Chinese Exclusion Act. Once the act was revised, immigration authorities would not let Ping return to his family in California. When Ping challenged that congress could not deport a Chinese citizen entitled to reside in the U.S., The circuit court of Northern California ruled that this act was just.

“If, therefore, the government of the United States, through its legislative department, considers the presence of foreigners of a different race in this country, who will not assimilate with us, to be dangerous to its peace and security, their exclusion is not to be stayed because at the time there are no actual hostilities with the nation of which foreigners are subjects.” ( The Chinese Exclusion Case, 130 U.S. 581) 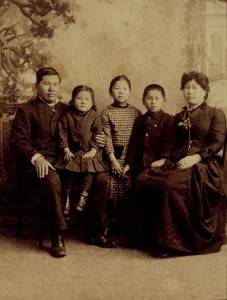 The Tape family, successful plaintiffs in the Tape vs. Hurley case that allowed their daughter into San Francisco's Spring Valley Elementary School in the 1880s.

The Chinese had to tolerate and endure strong anti-Chinese sentiment and harassment by well known figures and movement groups. Throughout California’s history, whether it had been during the gold rush.. to the building of the transcontinental railroad, the Chinese have always had to work hard to survive, as most of their employers would exploit them by offering considerably low wages. By working hard enough to squeeze out a living, despite how low its conditions were, some companies were more inclined to hire Chinese workers than white workers who required a higher wage. As whites began to realize that the Chinese were lowering the standards of living, there grew a great anti-Chinese sentiment that can be so observed through an excerpt written by novelist, Jack London in “The Yellow Peril” 1904. “He takes the turning which we cannot perceive, twists around the obstacle, and, presto! Is out of sight in the ramifications of the Chinese mind where we cannot follow… Four hundred million indefatigable workers (deft, intelligent, and unafraid to die), aroused and rejuvenescent, managed and guided by forty-five million additional human beings who are splendid fighting animals, scientific and modern, constitute that menace to the western world which has now been well named the “Yellow Peril.”

Before the year of 1885, Chinese Americans had little to no access to public education. Equal access to free public education had to be fought for in court. As a native-born Californian Chinese American, 8 year old Mamie Tape was denied admission to the public school Spring Valley Primary due to her Chinese descent. Mamie’s mother, a tax paying Chinese immigrant, found this decision to be unconstitutional and thus sued the principal of the school, Miss Jennie M. Hurley. In the famous Tape. v Hurley court case held in California’s superior court, Judge McGuire ruled that the refusal of Mamie’s admission was deemed unconstitutional. In a Daily Alta newspaper article, Judge McGuire’s ruling was cited:

“The only reason urged against her (Mamie Tape’s) admission is that she was born of Chinese parents. In other words, because she is descended from the Chinese branch of the Mongolian race, she is excluded by law from participating in the benefits and privileges of free public education, which are by the same law accorded to the children of all other races — white, black and copper-colored. There is no law in this State which is susceptible of any such construction, and if there were, it would be unconstitutional and void, as being in direct conflict with the Fourteenth Amendment to the Constitution of the United States.”- The Daily Alta Newspaper