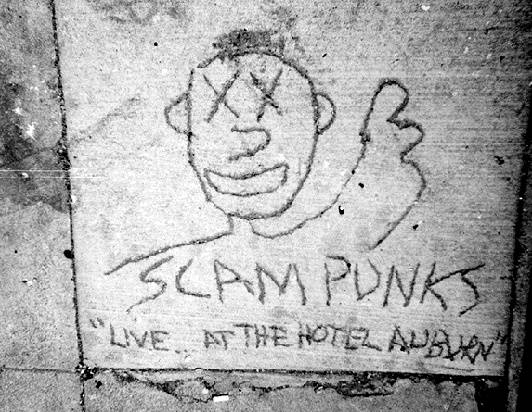 ABOUT THE PHOTOS (from writing that accompanied the author's exhibit of photos of San Francisco cement etchings that appeared at The Bearded Lady Cafe, September, 1999) 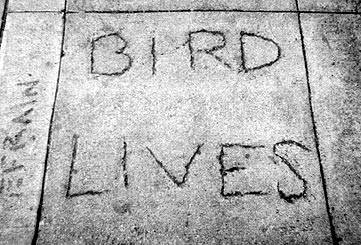 Love messages, Band names, political slogans. R.I.P.'s, hand prints, and "Fuck You!"s. I found just about everything in the cement, a sort-of subtle, day-in, day-out history of the streets we live in. Plenty of dogs and pigeons were even around at the right time to leave their mark on ole Ess Eff.

After a couple months of taking photos, I became obsessed with stopping to read every etching I passed. I'd see one of an unusual name, like "Arizona Joe", or something, dated from 1974 on Haight Street, and wonder why ole Joe came to The City. Was he just too late for the '60's in The Haight? I'd look around to see if there was a church around where Joe might have picked up some free meals before he headed off to wherever he headed. 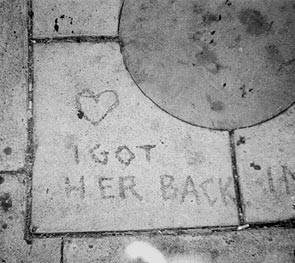 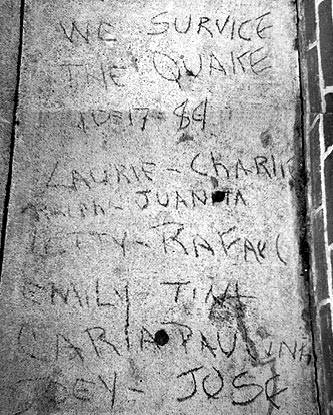 It seems like a silly obsession, maybe, but it could be really satisfying, too. Last year, I was researching the 1970 trial of Los Siete De La Raza. Los Siete were seven Latino youths from the Mission, all somewhat active in neighborhood and student politics, who were dubiously charged with the murder of a notorious, racist, Irish cop and the wounding of his partner in 1969. Their arrest and subsequent trial brought a lot of attention to the poverty, lack of services, and routine police brutality suffered by The Mission's majority Latin population. During their trial a grassroots organization, also named Los Siete De La Raza started up, offering free legal services, free breakfast programs at neighborhood churches, and even a neighborhood newspaper called BASTA YA! (translated loosely as "We've had enough of this shit!") Eventually, they even branched out into running a restaurant, also called Basta Ya, near the Levi-Strauss factory, in an attempt to provide cheap meals for and to politically organize the women immigrants who worked there.

Well, it may have just been a bad idea to call a restaurant "We've had enough of this shit!", but for one reason, or another, the restaurant failed. I'd always read about it as being "near Levi-Strauss", but I'd wondered where it had been, exactly, and what the building looked like today. Using an old city directory, I finally traced it to 260 Valencia, the sight of today's Pauline's Pizza, right next to the Levi-Strauss factory.

But my search didn't seem complete until later. One day, while walking around the factory, wondering about it all, I found, in cement, on Clinton Park, at Valencia, "Free Los Siete" There it was, just around the corner from El Basta Ya, a key to a very different Mission District. I could feel the 1970 summer sun and imagine long-haired Latin kids on every corner, and "Free Huey!" rallies, and, always, the white cops on the beat. 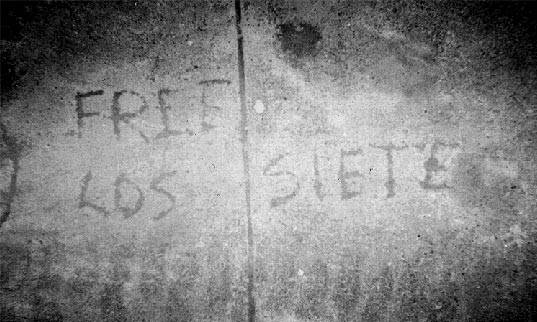 I could see the shifting layers of history, the disappointment and struggle written in the concrete walked so carelessly today by the young, white, and hip. For good measure, someone had scrawled next to it, "Impeach Pig Nixon!" 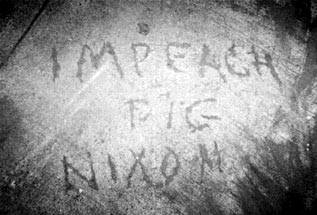 Another time, I was listening to the "These People" record by The Dicks, which features, on the back cover, The Dicks standing next to a newly planted "Friends of the Urban Forest" tree and a square of fresh, wet cement in which someone, presumably The Dicks, themselves, had written the mis-spelled, "Fight For Sociaism". Just like that, without the "L". Later that night, I walked down 15th and to my surprise, walked right by the very same etching! In the 15 years since the record came out, the tree's grown pretty huge! But "Sociaism" will be mis-spelled forever.

I guess I'll never know if it was Paul Westerberg, himself, who wrote "The Replacements" in the cement up in the Panhandle. And did Black Flag hit the cement at Fillmore and Germania, while they were out wheat-pasting for a show here in town? My theory on band names is that any band that people care enough about to get tattoos of, like Flipper, or Black Flag, is so big that anybody could have written their names in cement. But I doubt even the girlfriend of a member of "Brian Jonestown Massacre" was the one who wrote their name in the sidewalk on 3rd Street in China Basin.

But what about "The Lewd", written on Mission, over by the welfare office? Were they getting their checks when they tagged it, way back when? Were they the first SF punk rockers on welfare? Or was the welfare office even AT 8th and Mission when The Lewd was still playing shows?

On my search, I found North Beach had the oldest stuff, The Mission had all the gang stuff, and Haight Street had the most etchings saying, "Take LSD!" I thought that was pretty creepy, in a way, considering LSD's early history as CIA mind-control experiment, and how it could then end up as the first thing that crosses some drooling hippie's mind to write when confronted with a fresh, blank, wet square of cement. Still, besides "Take LSD", Haight Street just had the most etchings, period. 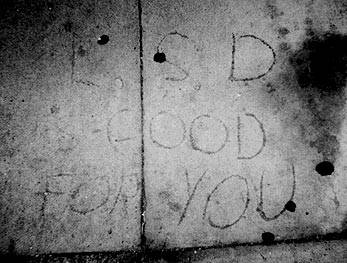 But maybe not for long. The neighborhood has clearly changed too much. Recently, I saw almost a whole SIDEWALK of cement, fresh, at Page and Shrader! I couldn't wait to hit it with my own etching, but there were two thug-like bouncer-types that were actually GUARDING THE CEMENT! Fuck that! We want the sidewalks!

So I went down to the Panhandle to wait 'til they split. Sure enough, in a couple minutes, they were gone, and I ran back up the block, bent over with my drum key in hand, and started writing. I was halfway done when I heard a voice from above yell, "Hey you! Cut it out!"

"Hey you! Leave that alone! We just poured it!"

I ignored them. Soon, a couple of angry, construction workers were running out of the house at me with a well dressed man, apparently the property owner, in tow. "We told you to stop that!" one yelled.

"He wants it clean!" yelled the other, motioning to the owner.

They stared blankly. They weren't getting it. The owner finally spat, "I want it clean." I shrugged and left and they went to work, smoothing over my writing.

I thought that was the end of it, but a couple minutes later in the Panhandle, a cop car pulled up to me. The cop yelled, "Alright, you! What happened back there?!? Got any I.D.?!?"

Yes, a grown man had called the cops on another grown man for writing in the cement. Pathetic. Even the cop seemed a little embarrassed, and, finally, realizing what had happened, just said, "Uh, well, don't do it again!" and let me go.

But I did do it again. I can't help it. Last week, I was riding my bike by City Hall when I saw Mayor Brown giving a press conference in Civic Center, only 30-feet away, across Polk Street. Apparently, it was a dedication ceremony for the lighting of the Christmas tree in the newly "cleaned up" Civic Center park. The Mayor, with his back to me, was talking away to a crew of news cameramen.

I watched for a minute and then I realized that the entire sidewalk in front of City Hall had new, wet cement! I bent over, key in hand, probably directly behind the Mayor on camera, and while he talked about how he cleaned up and refurbished Civic Center, I went to work. I couldn't resist. I wrote, "Fuck you, Willie Brown!"

P.S. This exhibit is dedicated to the mysterious "Nikko", who has, by far, the most etchings I have seen by any one individual in the whole City. He's mostly up in North Beach and Chinatown, but I've spotted his work in the Tenderloin, on Russian and Telegraph hills, and even down on Sycamore Street in the Mission! How did he do so MANY? Was he just in the right place at the right time? Was he a walking messenger? Is he 80, or 90 years old and he's just been hitting them his whole life? Does he work for the City, actually LAYING cement? 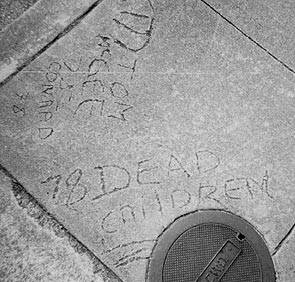