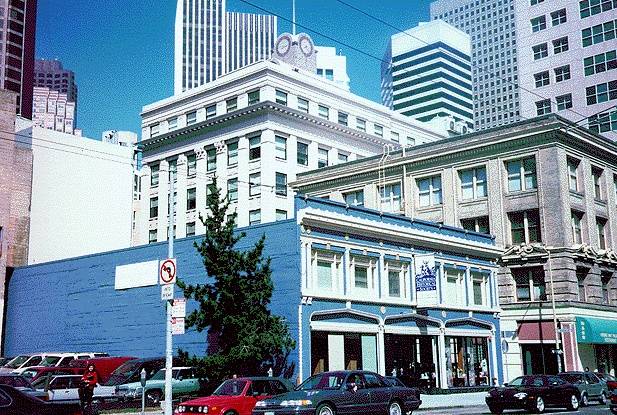 The new headquarters the California Historical Society occupied in the summer of 1995 is located at the northwest corner of Mission and Annie streets in the Yerba Buena Center area south of Market Street in San Francisco.1 The 1922 commercial structure is known historically as the Builders' Exchange Building. It fills its 56x119-foot lot, and the facade reads as two stories. It is symmetrical, an entrance flanked by large display windows, with six "Chicago" windows above. This window wall is framed with Renaissance-Baroque ornament.

Here, the California Historical Society is in the midst of San Francisco's new cultural center. The main attractions opened recently around the corner on Third Street are the San Francisco Museum of Modern Art, the Center for the Arts Galleries and Theater, and Yerba Buena Gardens. Moscone Convention Center, two major highrise hotels on Third and Fourth streets, half a dozen modern apartment complexes, and some office towers were built earlier. Still on paper are an office complex next door to the historical society, another new structure across the street, and the Jewish and Mexican museums nearby.

The California Historical Society's 1922 building is old enough to qualify as "historic," but the land it stands on has an urban history that stretches back 145 years to the beginnings of San Francisco as a city. The newly created neighborhood is actually the fourth significant change for the area.